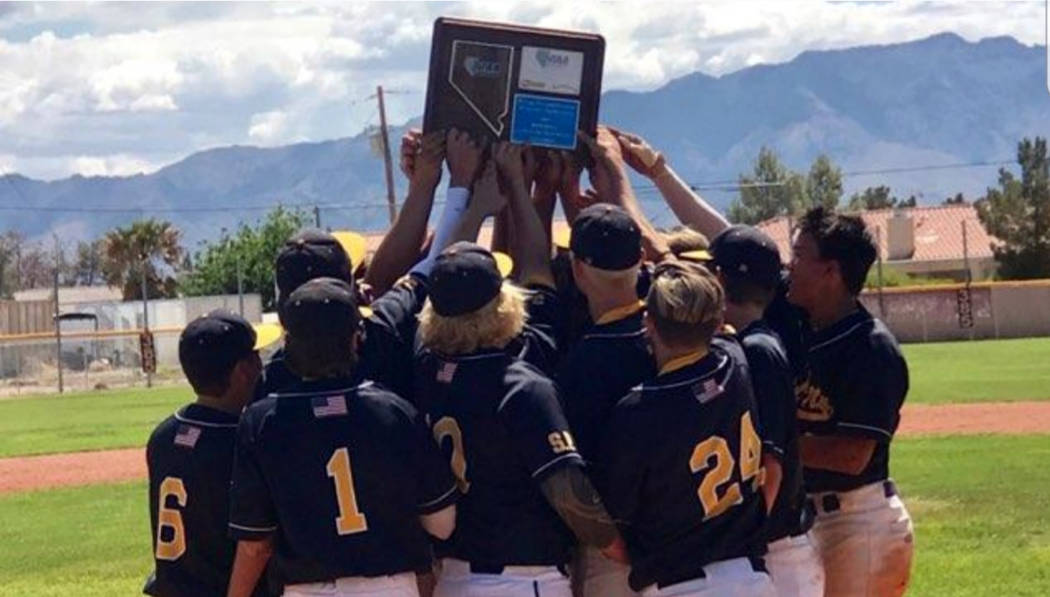 Knocking off rival Moapa Valley during the regional tournament on May 9 and Saturday, May 11, the Eagles are undefeated 4-0 this postseason, with state championship banners on players’ minds.

“Right now these guys are focused on the prize,” head coach Ed McCann said. “I knew we had the makeup of a good ballclub, but there were times I questioned if this was really going to be our season. After the two wins against Moapa Valley, I’m not questioning anymore.”

Easing McCann’s doubts, the Eagles put together a solid four-game stretch throughout the region tournament, capping off their efforts with an epic comeback.

Trailing 7-2 to Moapa Valley in the bottom of the seventh inning in the Southern Region championship game Saturday, May 11, at Pahrump Valley High School, the Eagles rallied with the type of resiliency only a champion could, edging out a 8-7 victory.

Down to their final three outs before prepping for a deciding game two of the championship series against the Pirates, junior Clark Newby and sophomore Scott Bahde beat out ground ball double plays with hard runs to first base.

Sparking momentum, the Eagles went on to score six runs in the inning.

“Obviously the bats came alive with timely hits, but really it was our effort level that made that comeback possible,” McCann said. “We preach to our kids about running a hard 90 feet to first base, and Newby and Bahde did that and that was the difference maker. If one of them gets out, Moapa Valley wins the game and gains all the momentum for game two. Both of them showed no quit. They got guts.”

Thorpe batted 2 for 4 with two RBIs in the Eagles’ 7-4 victory on May 9, and Connell picked up the victory after throwing three scoreless innings.

Defeating Pahrump Valley 7-3 on May 8, sophomore Blaze Trumble hit a three-run home run. Lopez batted 3 for 4 with a pair of RBIs.

Ready to hang another state championship banner, the Eagles travel to Virgin Valley High School in Mesquite today, May 16, to face Northern Nevada challenger Churchill County in the opening round.

“These guys play with a long of swagger,” McCann said. “They know what’s at stake and they’re ready to go out and take it.”