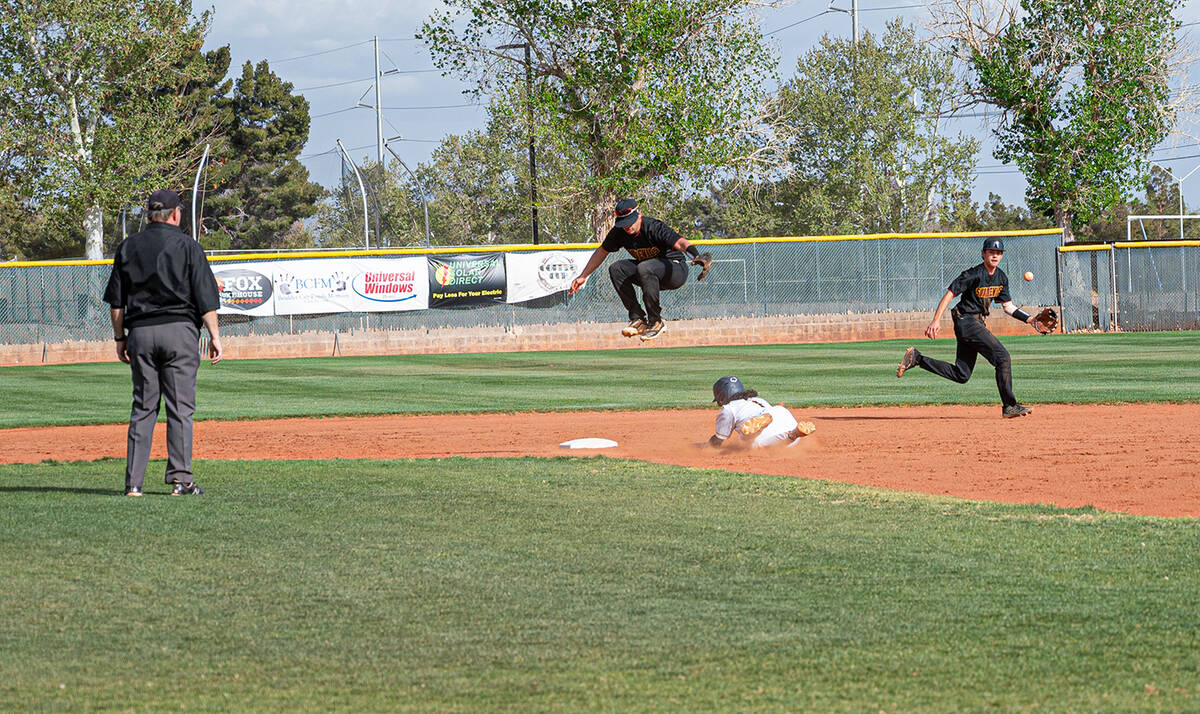 (Jamie Jane/Boulder City Review) Sophomore Derek Render slides into second base during the Eagles’ 2-1 victory over Eldorado High School on Monday. At the plate, he went 1 for 2 and batted in a run.

Boulder City High School’s baseball team pulled off a nail-biter against Eldorado on Monday, March 28, in a 2-1 victory.

Coming down to the wire in the bottom of the seventh, the Eagles scored on a sacrifice fly from senior Johnny Johnson to secure the victory.

“Eldorado is a good team,” said head coach Alex Moore. “We showed some perseverance out there and battled. Thankfully we were able to get some guys on base late and come away with the win.”

Stuck in a 1-1 tie for the majority of the game, the Eagles and Sun Devils traded runs between the third and fourth innings, putting the pressure on junior starter Isaac Gibson. Handling himself with composure on the mound, Gibson turned in his best performance of the season, pitching six innings where he allowed three hits, while striking out nine batters.

“This was his best performance of the year,” Moore said. “He was able to get ahead of batters and pitched to contact. He trusted his defense and we were able to make plays for him. His curveball was working and he was throwing strikes.”

Coming in relief to secure the win in the top of the seventh, junior Kanon Welbourne threw a hitless inning where he struck out two batters.

At the plate against Eldorado, sophomore Derek Render batted 1 for 2 with a run batted in, and junior Dylan Spencer batted 2 for 2.

Routing Western 13-1 on March 24, the Eagles offense exploded for six runs in the fourth inning to close out the Warriors in five innings.

On the mound, senior Ben Schafler picked up the win, striking out eight batters in four innings pitched.

Looking to stay on a hot streak, the Eagles will travel to Pahrump Valley on Friday, April 1, followed by a road game at Clark on Tuesday, April 5.