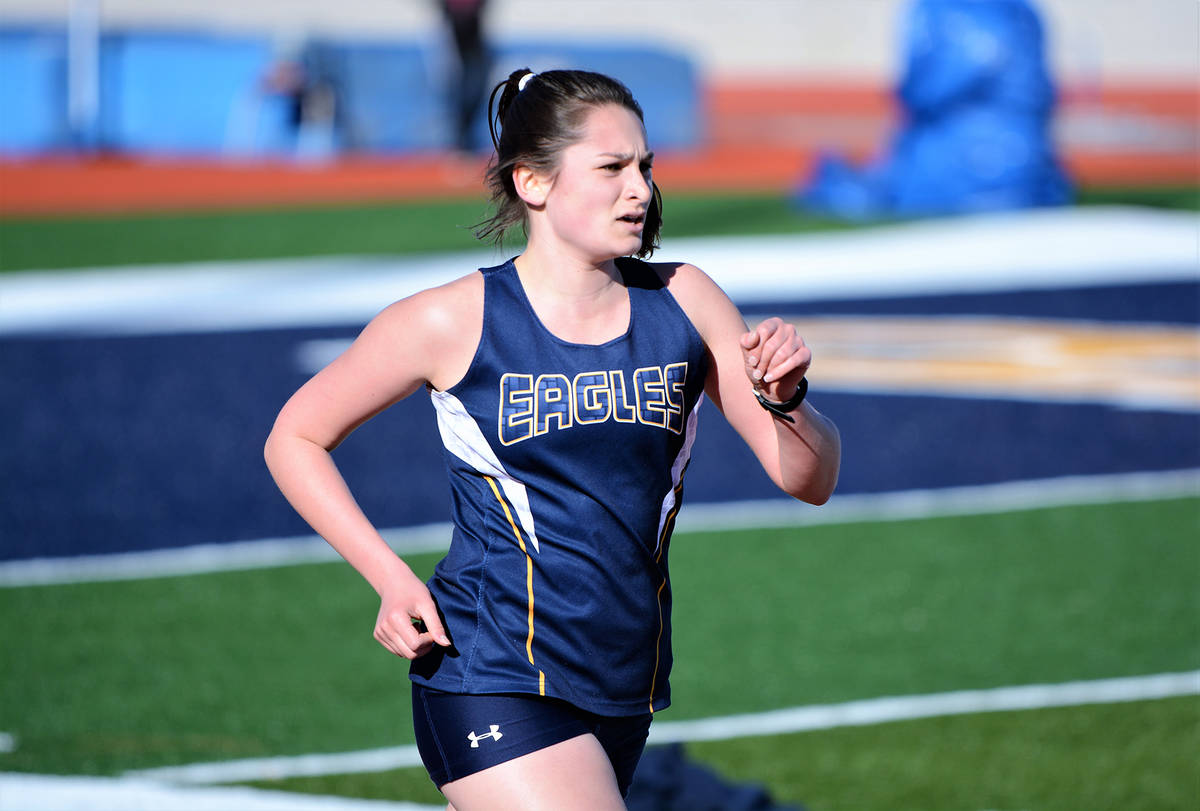 Facing off against 4A and 5A programs Basic, Canyon Springs, Coronado, Faith Lutheran, Green Valley, Las Vegas, Liberty, Palo Verde, Rancho and Sierra Vista this season, the Eagles won’t get the opportunity to compete against their 3A rivals unless a regional meet currently in talks comes to fruition.

“It’s going to be different not getting the chance to compete against our rivals in the 3A,” girls coach Mark Misuraca said. “We’re going to make the most of this season anyway. Because of COVID-19, they grouped schools together based off location to try and prevent exposure as much as possible. We’re definitely excited for this season and would love the opportunity for a regional meet at the end of the season.”

Seniors Sophie Dickerman, Chloe Payne and Christina Dunagan will anchor the girls, along with junior Mary Henderson. They will compete with a young but talented roster, Misuraca said.

“We’re really going to rely on this group to not only be our top point earners but to also lead by example,” he said. “We have a really young roster, but there is a lot of talent. I’m confident in their abilities to be leaders and help make everyone better.”

Only competing in one event last season before the pandemic shut down the season, the Lady Eagles proved to be among the top 3A teams in the region, finishing third at the Bulldog Early Invitational behind rivals Virgin Valley and Moapa Valley. They’ll look to duplicate, if not improve upon, that success for this season.

In distance running, Henderson finished first at the Bulldog Invitational in the 800- and 3200-meter runs. Dickerman finished third in the 3200-meter run. Both were part of the Lady Eagles’ 4×800 winning relay team.

In hurdlers, top athletes Chloe Payne and sophomore Ava Payne return. At the Bulldog Invitational, Chloe finished fifth in the 100- and 300-meter hurdles, while Ava finished fourth and seventh, respectively. Chloe Payne is also the team’s top triple jumper, finishing fourth in the event in her only meet last season.

Looking to improve upon last year’s seventh-place finish at the Bulldog Invitational, the boys bring back an experienced roster heading into the season.

“We have faced a lot of challenges this year and it is great to be out there on the track,” coach Earl Lee said. “We have five returning seniors that will lead the team this season, while our returning juniors and sophomores will be the core of the team. The freshman who have joined the team show a great deal of athleticism and promise to help our team compete. We are looking forward to a short, but successful track season.”

Coming back to anchor the boys this season will be seniors Sonny Peck, Rafe Echeverria and Spencer Torgesen, along with juniors Travis Wood and Keifer Reinhart.

A jack of all trades, Peck finished first in pole vault, sixth in 110-meter hurdles and 10th in the triple jump at the Bulldog Invitational, while Echeverria finished seventh in discus and ninth in the shot put events.

Hoping to get off to a strong start, the Eagles will travel to Liberty High School on Saturday where they’ll compete against Green Valley, Laughlin and Liberty.