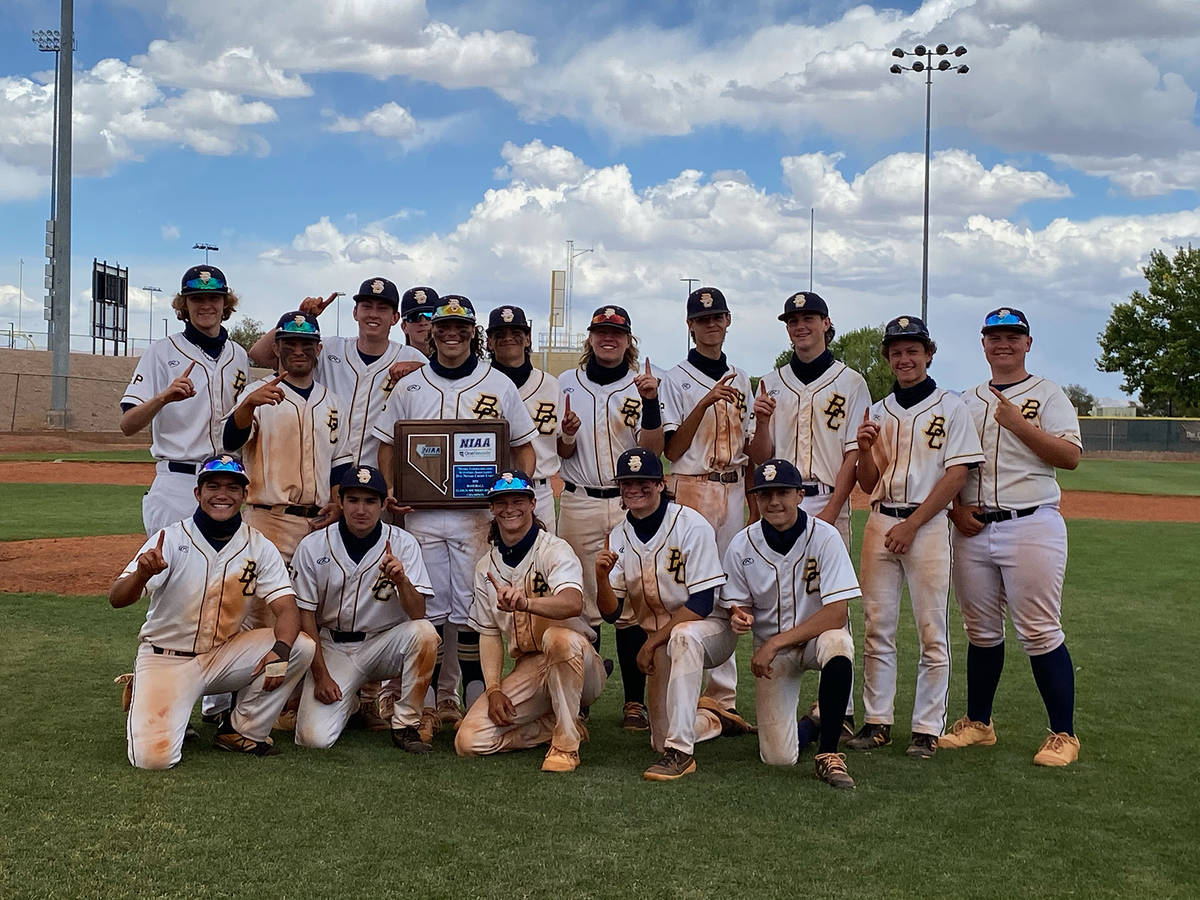 (Amy Wagner) Boulder City High School’s boys varsity baseball team was crowned the regional champion in the 3A division after defeating Pahrump Valley 8-4 on Saturday, May 22.

“It feels great to be able to win the regional championship with this team as a senior,” Blaze Trumble said. “This season going undefeated was a great accomplishment for the guys and I. We worked really hard together and it was nice to see it paid off.”

“When we heard there was going to be a regional championship, we wanted to win it all,” senior Troy Connell said. “I am extremely proud to be a part of this team and what we have accomplished. All the work we have put in was worth it for that undefeated record. Hopping from field to field, trying to get whatever practice we could in paid off when we walked off the field with a perfect record.”

Playing their toughest competition of the season in the championship finals, the Eagles battled back and forth with the Trojans before breaking open a 2-1 lead with six runs in the third inning.

Trumble and senior Scott Bahde would later each single in the inning to drive home a run apiece, giving the Eagles a comfortable lead to never look back.

Trumble finished 2 for 2 at the plate, and Bahde finished 1 for 3.

Giunta finished 2 for 4 and Connell batted 2 for 3. Tuenge batted 1 for 3 with a pair of runs batted in, while senior Deavin Lopez batted 1 for 4 with three RBIs, singling home a pair of runners in the bottom of the second inning.

Giunta threw two innings in relief out of the bullpen, striking out a pair of batters and allowing only one hit.

The regional championship win was a bittersweet moment for the Eagles as the “what if” thought of a state title always lingered.

In a COVID-19 pandemic-shortened season however, this group was just happy to get back out on the field one last time.

“This was a great group of kids who deserved a state tournament,” head coach Bobby Reese said. “I know I would have loved a shot at the northern teams and I know the boys would, too. We really started to get hot at the right time. We had one home run as a team before the playoffs started and hit four in four games. It was absolutely my pleasure to get a chance to coach these boys this season. It was a lot of fun and well worth coming out of retirement for.”