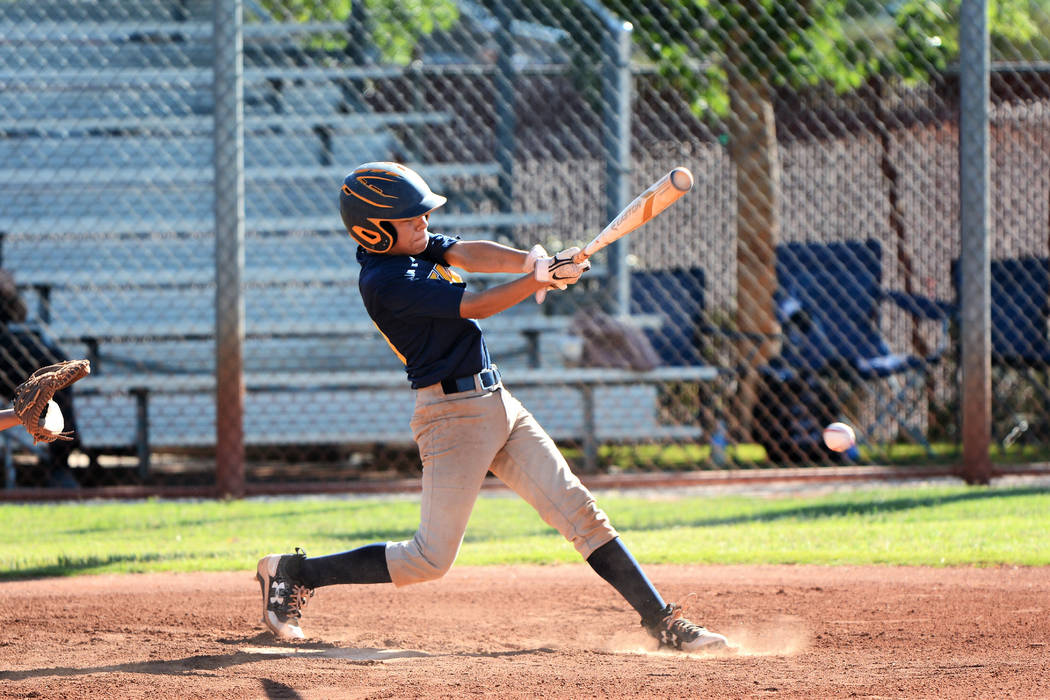 (Robert Vendettoli/Boulder City Review) Matthew Pickens of the Southern Nevada Eagles hits a ground ball to second base, reaching successfully on a fielder choice against Faith Lutheran on Saturday, June 8. The Eagles won both games of their doubleheader.

The Southern Nevada Eagles 14U baseball team in the Connie Mack League cruised to a trio of double-digits victories this week, defeating Palo Verde 12-2 on Friday, June 7, and Faith Lutheran 24-2 and 11-3 on Saturday, June 8, advancing to 6-1 on the season.

Establishing dominance at Whalen Field against the Panthers, the Eagles exploded for five runs in the second inning and six runs in the third inning behind two runs batted in each from Matthew Pickens and Chase Calvez, who each batted 2 for 2, and Izec Easter, who finished 1 for 1.

Ben Schaffler picked up the victory, allowing two runs in three innings on the mound with a pair of strikeouts.

Traveling to Faith Lutheran for a double-header, the Eagles flexed against the Crusaders offensively.

David Wagner carried the heavy bat for the Eagles, driving in six runs in the first game. Jeremy Spencer (3 for 4) and Dylan Spencer (2 for 3) each drove in a pair of runs with a pair of doubles each.

Wagner won game one for the Eagles; Dylan Spencer won game two of the doubleheader.

Continuing to play 4A programs this summer, the Eagles will host Foothill tonight, June 13, at Whalen Field, followed by a doubleheader against Las Vegas on Monday, June 17.

Trailing 2-0 heading into the bottom of the third inning, the Eagles rattled off three runs, highlighted by Joey Giunta breaking the 2-2 tie with a line-drive single to second base. Giunta finished 2 for 3 with a run batted in.

Chase Calvez, who was called up for the 14U team, finished 2 for 3 with an RBI.

Adding on four runs in the fifth inning for insurance, Scott Bahde finished 1 for 2 with an RBI.

On the mound, Jonathan Neal earned the win for the Eagles, pitching 3 2/3 innings, allowing two runs on four hits with three strikeouts.

Advancing to 5-1 on the season, the Eagles 18U team will host Bonanza on Saturday, June 14, at Whalen Field for a doubleheader, followed by doubleheader against Green Valley on Wednesday, June 19.