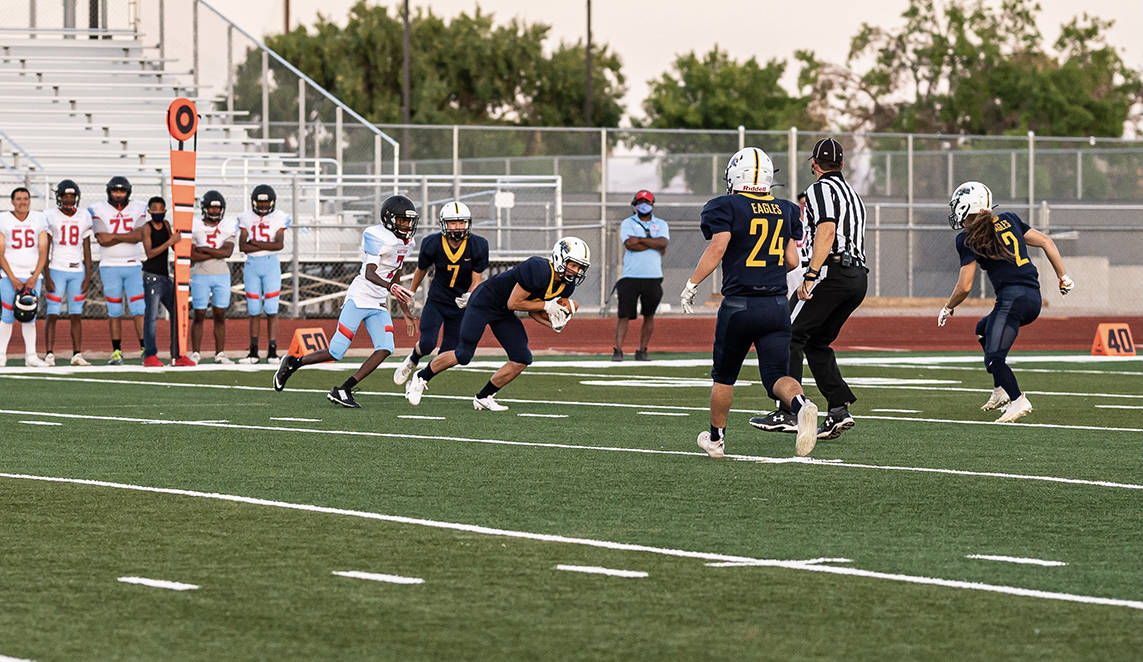 (Jamie Jane/Boulder City Review) Boulder City High School junior Bruce Woodbury intercepted a pass from Western High School during the season opener Friday, Aug. 20, and ran it in for a touchdown. The Eagles defeated the Warriors 52-0.

Despite being a rout from start to finish, head coach Chris Morelli called the effort sloppy at times, referring to the four touchdowns that were called back on the Eagles due to penalties.

“We’re very happy to be back out on the field,” Morelli said. “I’m proud of our guys for opening the season with a victory, but honestly, after seeing our performance, I know there is work to be done. We were able to move the ball very well all night and should have had more touchdowns, had they not been called back for mindless mistakes. It was sloppy at times and that’s something were going to need to clean up as a group. They know once we get into the harder portion of our schedule that we can’t play like that. I’m confident we’re going to get the issues fixed.”

Despite being upset over missed opportunities, the Eagles made sure to end several drives successfully, scoring touchdowns through the air, on the ground and on the defensive side of the ball.

Running all over the Warriors, senior Joshua Fotheringham and juniors Hunter Moore and Mick Raabe each added rushing scores for the Eagles.

Fotheringham led the rushing attack with 58 yards off of three carries. Raabe carried seven times for 36 yards. Moore added 28 yards on the ground off of five carries.

Through the air, sophomore Jacob Bryant made his first varsity start, connecting on three of four for 66 yards and two touchdowns. Junior Matthew Richards led the receiving core with two catches for 55 yards and a score, while Martin Thompson caught an 8-yard touchdown pass.

“I thought Jacob did a really good job out there,” Morelli said. “Obviously, there wasn’t much of a need to throw the ball, but on the passes he did make, he looked sharp. Our offensive game plan is going to be balanced and we’re excited to see what he can do.”

Getting it done on the defensive end, the Eagles not only pitched a shutout but ended up with touchdowns from senior Jace Tenney and junior Bruce Woodbury.

Tenney recovered a fumble for the Eagles, while Woodbury ran an interception back for a score. Senior Isaac Tuenge also intercepted a pass.

“Our defense did an amazing job applying pressure and getting to the ball,” Morelli said. “We’re going to rely on them heavily this season. We still have some moving pieces to figure out, but I like the way we played.”

In for a tougher test this week at home, Boulder City will host Valley on Friday.