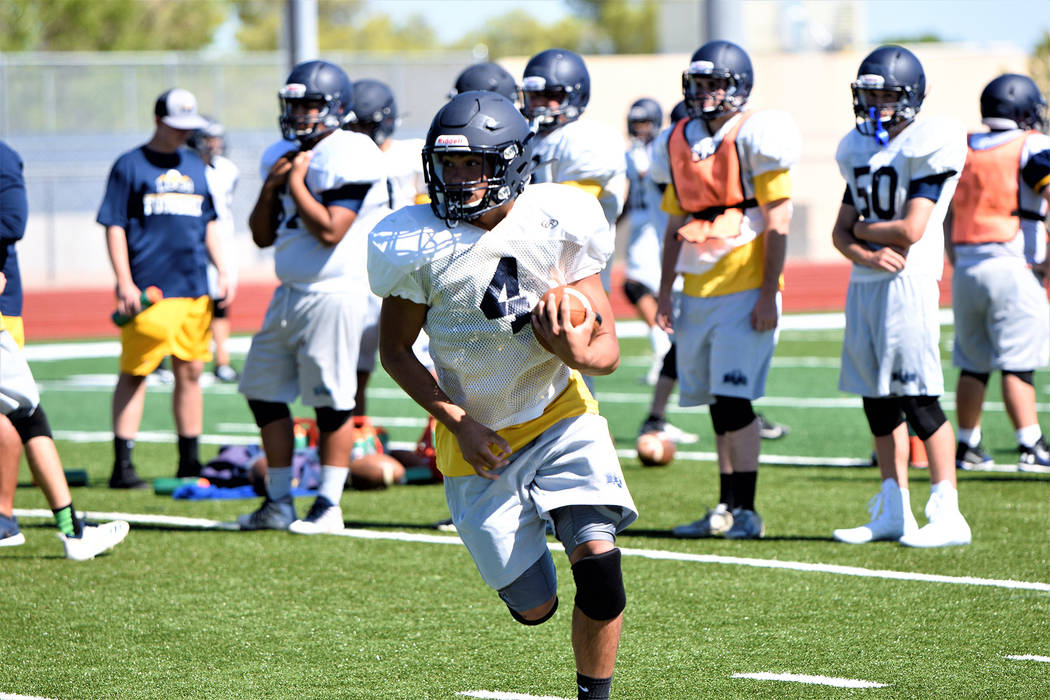 (Robert Vendettoli/Boulder City Review) Running the ball up the middle, junior running back Deavin Lopez looks to pick up extra yards during a practice session at Boulder City High School on Monday, Aug. 19.

Coming off of their first playoff appearance since 2014, Boulder City High School’s football team is ready to keep the train rolling.

Heading into year five of head coach Chris Morelli’s tenure with the program, the Eagles are coming off a 7-4 season after recording only five wins the previous three seasons combined. With an abundance of talent on this season’s roster, Morelli said he doesn’t see his team moving backward.

“I really like the makeup of this team,” he said. “We are loaded at the skill positions, and this is probably one of the most talented rosters I’ve had here. We’re really junior heavy with only four seniors, but I believe we’re going to keep moving forward as a program. We’re going to take it one game at a time and expect to win each game.”

Senior quarterback Parker Reynolds is set for year two under center in what Morelli hopes will be a dynamic offense.

Reynolds, who completed 94 of 177 (53.1 percent) for 1,353 passing yards, 11 touchdowns and four interceptions last season, said he is comfortable after a year in the offense and expects big things out of himself and junior playmakers Scott Bahde, Trey Davis, Matt Morton and Deavin Lopez.

“This year I want to help this team get back to where we were last year,” Reynolds said. “That comes from everyone on offense doing their jobs. We’re going to take each game week by week, just improving and becoming the team I know we can be.”

Expected to be the lead running back for the Eagles after the departure of Thorsten Balmer (1,619 rushing yards, 26 touchdowns), Lopez brings a different running style to the Eagles’ offense with his slashing ability.

“Individually, I would like to be the threat that teams have to worry about and put more effort into,” Lopez said. “I bring my own way of playing running back into the offense that I think we can use to bring us far into the playoffs. I’m prepared to do this. I’ve played this position before, and I’m comfortable playing it.”

The defense will look similar as multiple key players work on both sides of the ball with Bahde (25 tackles) Davis, Lopez (15 tackles) and senior Cade Cowley (10 tackles) teaming with junior linebackers Matt Felsenfeld (13 tackles, one interception) and Kyle Halama (25 tackles).

Junior defensive lineman Blake Charlton and junior defensive back Dakota Christian are also expected to make key contributions for what will be a young core.

“We are young on the defensive side of the ball, but a lot of them got some time last year at the varsity level,” defensive coordinator Alex Moore said. “We are waiting to see who will step up and be a leader of the defense this year.”

Prepping for their season opener Friday against 4A Cimarron-Memorial, there’s optimism around the program that this will be another successful season. Using their matchup with the Spartans as a measuring stick, the Eagles will look to prove early that last season wasn’t a fluke.