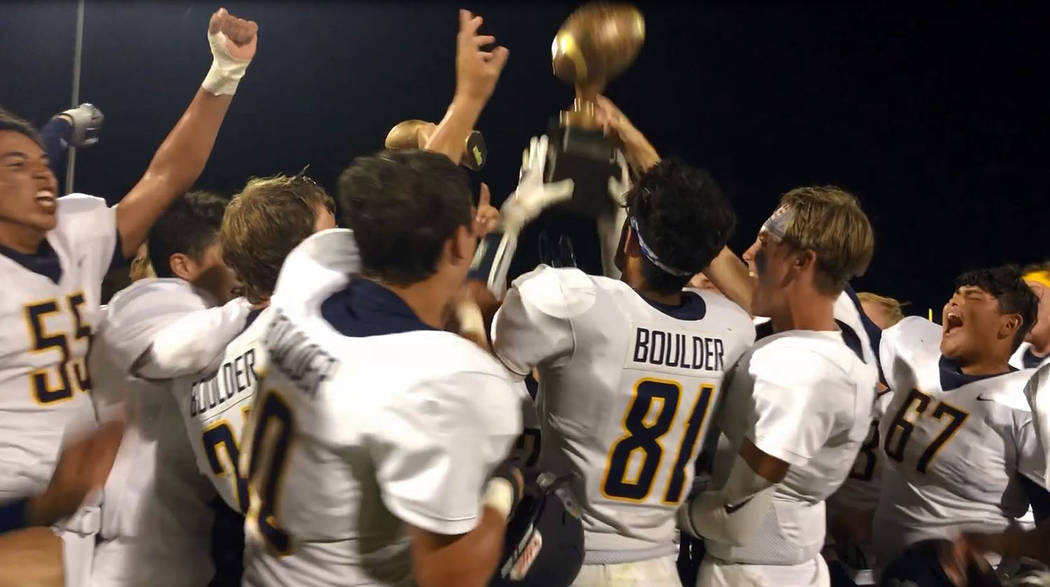 The Boulder City High School football team came from behind and knocked off Cheyenne 12-7 on Aug. 29 2019, for its first victory of the season.

“Defensively we were lights out,” head coach Chris Morelli said. “We played out of our minds. It was really nice to see our defense swarm to the ball like they did.”

Bruising their way past the Desert Shield, the Eagles were held scoreless throughout the first half of the Thursday Night Lights away game before getting on the board midway through the third quarter.

Junior Deavin Lopez made the most of his two carrying opportunities and put the Eagles on the board after a 1-yard touchdown run with five minutes left in the third quarter.

Lopez had 7 yards for the night and made four tackles on defense.

Carrying the load on the ground, senior Devon Walker rushed 29 times for a 151 yards, tiring the Desert Shield defense throughout the night.

“We knew that we could run the ball against them,” Morelli said. “We wanted to give Cheyenne a load to tackle, and he did just that. He got stronger as the night went on. He did a phenomenal job.”

Getting on the board midway through the third quarter, junior defensive back Dakota Christian added to the scoring affair on the Eagles ensuing defensive possession, generating a 39-yard interception return for a touchdown.

“Dakota is one of those kids, that can intercept the ball in the middle of the field and run it back 40 yards,” Morelli said. “He has great football instincts, and that was a much-needed touchdown. To be able to stop them from scoring and get one of our own was a huge momentum builder.”

Off this week with a bye, the Eagles are back in action on Sept. 13, where they will travel to rival Pahrump Valley.