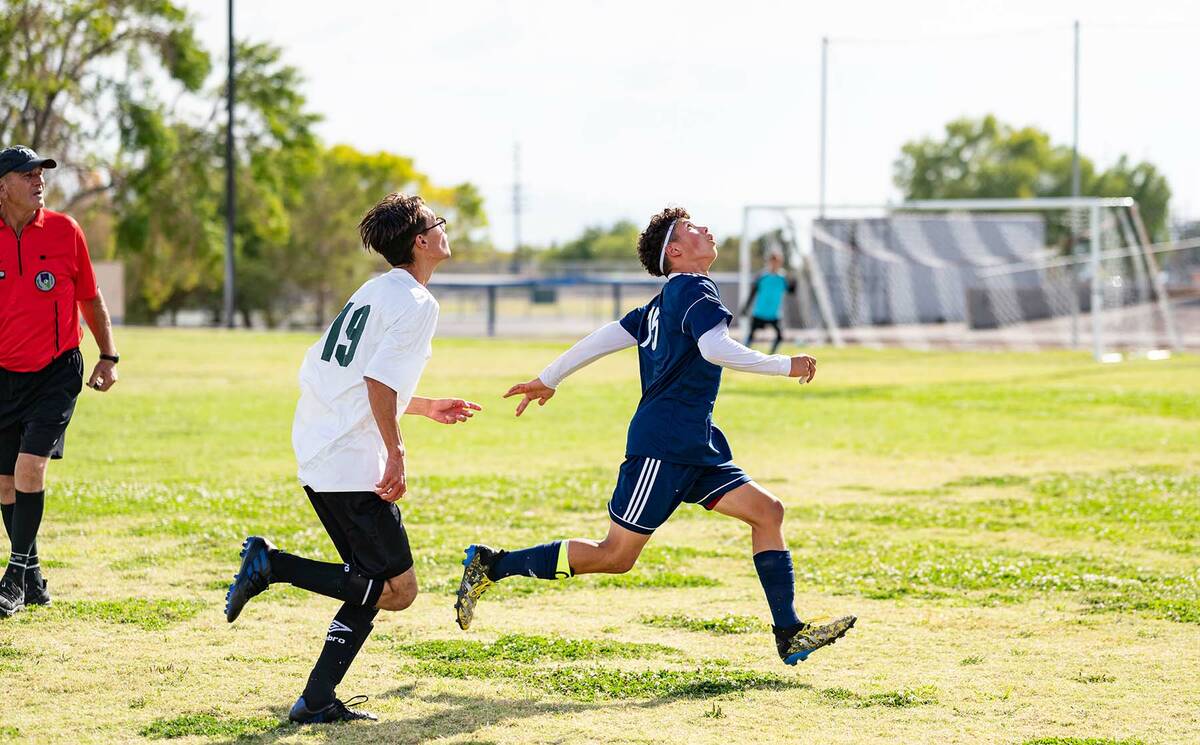 (Jamie Jane/Boulder City Review) Sophomore Lane Pusko looks for the ball in the Eagles’ 6-0 win against Virgin Valley on Sept. 9 at home.

Hosting rival Virgin Valley on Sept. 6, the Eagles cruised to a 6-0 victory, followed by a 9-0 rout of Somerset Losee on Monday, Sept. 13.

“We played good as a team,” boys head coach Haden Jaramillo said. “The scores were definitely an indication of what we wanted to happen. Obviously there’s still some things we need to work on as a team, but you can never be disappointed after a big win.”

Going head-to-head with the rival Bulldogs, the Eagles’ victory is definitely a momentum builder, especially coming off a loss.

Freshman Sean Pendleton was in a giving mood with four assists, and junior dynamic goal scorer Gavin Kessler set up his teammates in this game with two assists.

“It’s really big to win a rivalry game,” Jaramillo said. “Before the game, it was getting a little chirpy from both benches. As a young team, it’s really good to get those competitive juices flowing, especially in a competitive game like that. Overall, our team handled it very well and went out there and played a very solid game.”

Rose, Crowl Wade and sophomore Kaden Acree each added a goal for the Eagles.

Kesler, Rose and Crowl Wade each had two helpers, while Pendleton added an assist.

“I love seeing as many people on the score sheet as possible,” Jaramillo said. “The fact that we have a lot of kids who can score the ball is very beneficial for us. It’s good that we’re not a team who relies on just one player.”

In the net for the boys, the Eagles seemed to have found their permanent goalkeeper after freshman Zane Ranney guided a pair of shutouts.

“Zane is definitely our goalie moving forward,” Jaramillo said. “We have a lot of confidence in him. We’ve had shots on goal and he’s been defending them very well. He’s proven himself during our last two shutouts.”

Picking up a dominant shutout victory of its own on Friday, Sept. 10, the girls soccer team advanced to 3-0-1 on the season, defeating Cristo Rey 16-0.

Freshman Abbey Byington added three goals and an assist, while senior Quincy Gibson added a pair of goals. Juniors Elizabeth Wirthlin and Miranda Williams each scored a goal for the Lady Eagles.

Wirthlin dished out four assists, while Williams added one. Senior Samantha Bahde and junior Ava Payne each added an assist.

The girls were unable to play their game against Moapa Valley on Tuesday, Sept. 14, due to COVID-19 protocols.