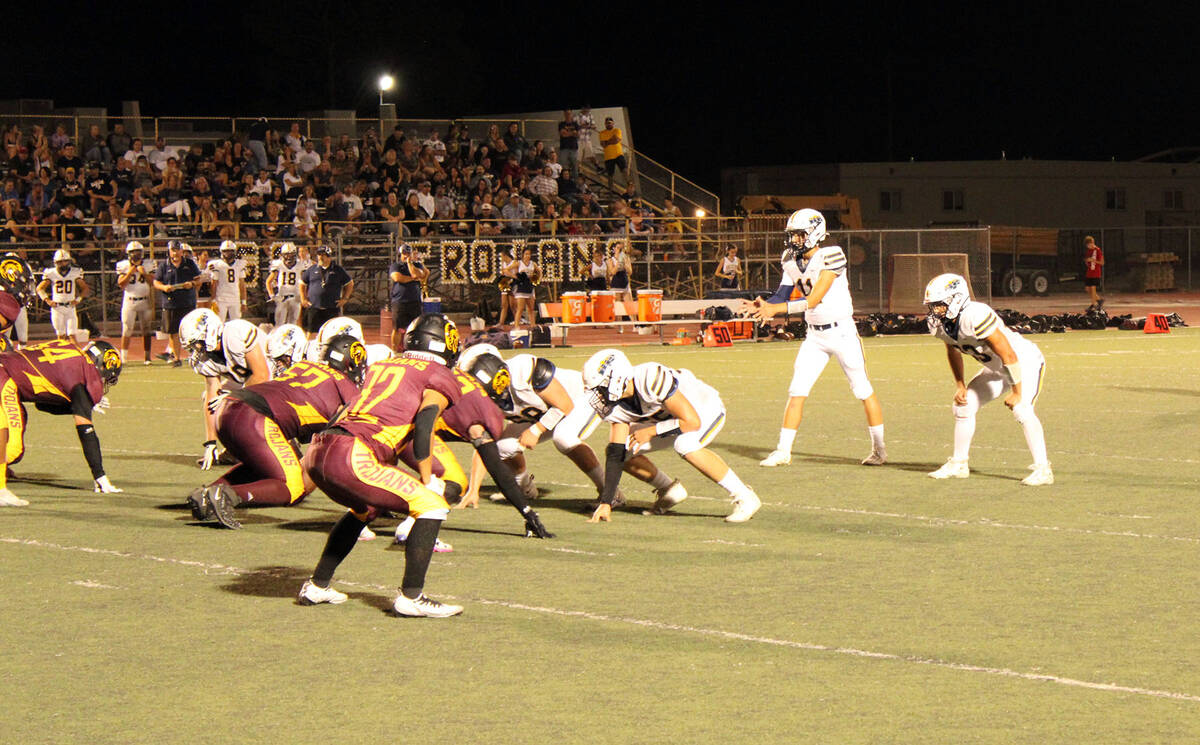 (Danny Smyth/Special to the Boulder City Review) Jacob Bryant, second from right, proved to be the star of the game for the Eagles on Friday, Sept. 23, throwing two passes for touchdowns and adding another rushing on the ground.

Traveling on the road, the Eagles dominated the second and third quarters before giving up a late score to bring the game closer.

“I thought our kids did a phenomenal job,” said head coach Chris Morelli. “Obviously, we hate to give up a late score, but we went out there and played great. We executed our game plan.”

Collectively rushing 37 times against the Trojans, senior Hunter Moore carried the load, bruising his way to 115 yards and a touchdown on 23 carries.

Normally known for their ground-and-pound rushing style, junior quarterback Jacob Bryant proved to be the star of the game for the Eagles’ offense, totaling three touchdowns on the night. Nearly perfect through the air, Bryant connected on six of his seven pass attempts for 112 yards and two touchdowns, while adding a rushing score.

“Jacob did a really good job out there,” Morelli said. “We knew we would be able to catch their defense off-guard and he executed for us.”

Playing well-rounded football, the Eagles defense made stops when they needed to, anchored by senior Dylan Sullivan, who made eight tackles with a pair of sacks.

“Dylan did a really good job for us on defense,” Morelli said. “He’s really become disruptive on that end and is making plays.”

Senior Dylan Spencer made five tackles, with one for a loss, and junior Brady Sorenson made six tackles.

Currently 4-1 on the season, the Eagles will host Eldorado on Friday, Sept. 30, and celebrate homecoming.