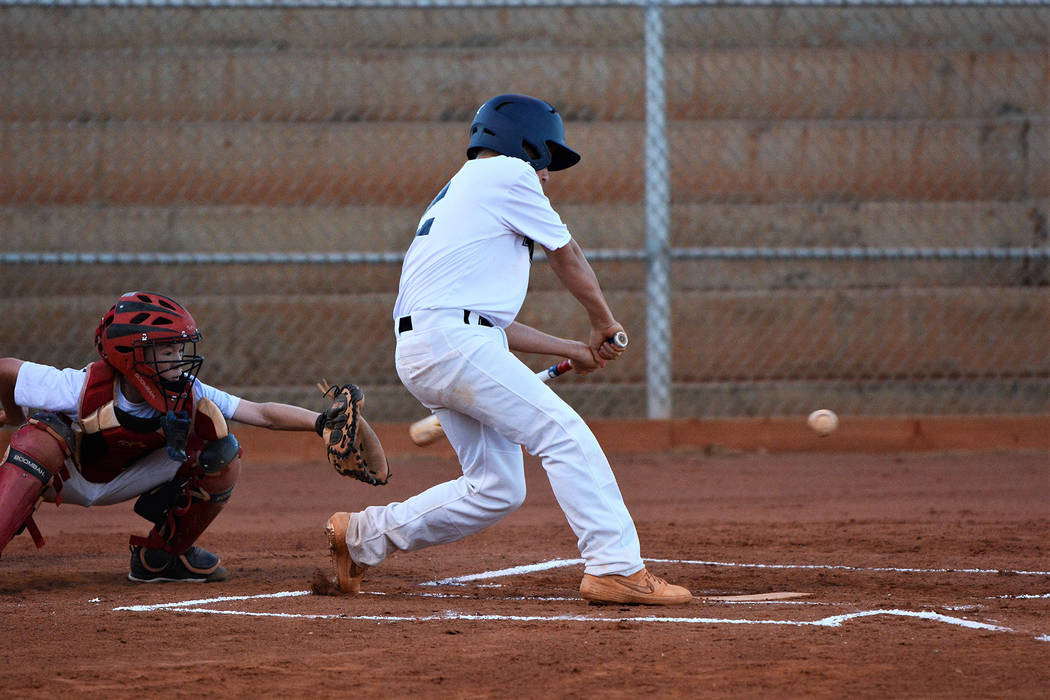 (Robert Vendettoli/Boulder City Review) Jeremy Spencer, seen connecting on a breaking ball against Palo Verde on June 22, went 2 for 3 on Friday, July 5, in the Southern Nevada Eagles 14U baseball team’s 10-3 loss to Shadow Ridge in game one of a doubleheader.

The Eagles also lost to Shadow Ridge 4-3 in the double-elimination tournament to finish the season with a 12-4 record.

Adding late-game excitement in their finale against SLAM, the Eagles scored four runs in the bottom of the seventh inning, highlighted by Blaze Trumble’s two runs batted in.

On the mound in relief, Jonathan Neal threw 4 1/3 innings, allowing four runs while striking out six.

Battling with Shadow Ridge to the final out, the Eagles scored two runs in the sixth to cut the Mustangs’ lead to 4-3, before bowing out.

Unable to handle their higher-division opponent, the Southern Nevada Eagles 14U baseball team dropped a pair of contests to 4A Shadow Ridge on Friday, July 5.

In game one of the doubleheader, the Eagles fell 10-3, allowing four runs in third inning and four in the fourth.

Jeremy Spencer and Brayden Cook each went 2 for 3, and David Padilla added a triple in three at-bats.

Falling 10-5 in game two, the Eagles cut the Mustangs’ lead to 6-5 heading into the top of the sixth before allowing four runs to close the game.

Cook and Dylan Spencer each 2 for 3 with an RBI. Padilla added an RBI triple and Izec Easter had an RBI double.

Concluding their season Saturday, July 13, the Eagles will travel to 4A Foothill for a 9 a.m. game.

Results from the Eagles’ Wednesday, July 10, contest with LV Spartans will appear in next week’s issue.