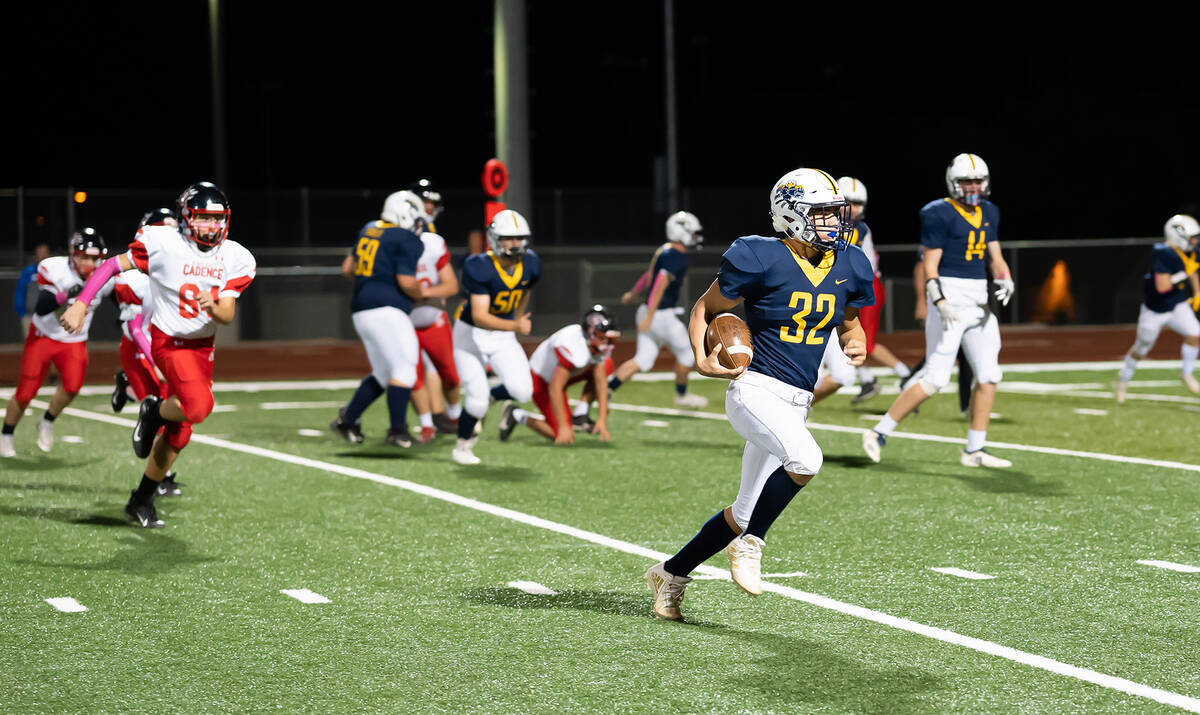 (Jamie Jane/Boulder City Review) Hunter Moore, a junior at Boulder City High School, headlined the Eagles’ offense this season and rushed for 78 yards and two touchdowns against Cadence on Friday, Oct. 22. The Eagles won 64-0 in front of a hometown crowd.

It was a bittersweet ending to the season for Boulder City High School’s football team, which routed Cadence 64-0 on Friday, Oct. 22.

Concluding senior night with a win and ending the season on a high note with a 4-1 record in front of the hometown faithful, the Eagles will miss the postseason this year after finishing fourth in the 3A Mountain League.

“I’m happy we snapped our losing streak and were able to send these seniors off with a win,” said head coach Chris Morelli. “I wish this didn’t have to be our last game, that we had playoff football to look forward to. Unfortunately, it just wasn’t in the cards for us this season.”

Chalking this season up as a developmental year, the Eagles, which finished with a 4-4 record, found several bright spots on offense, headlined by junior running back Hunter Moore, who rushed for 78 yards and two touchdowns against Cadence and became the Eagles’ lead back this season.

“We didn’t accomplish what we set out to do at the beginning of the season, but there are definitely some positives to take out of this season,” Morelli said. “Moore showed us this season that he’s a really good back and the majority of our offensive line returns next season as well. We also started a sophomore quarterback and a lot of younger guys at the skill positions. It was really great to get them all experience.”

The Eagles made sure to give the hometown crowd one last chance to cheer, scoring seven touchdowns on the ground collectively.

On defense, senior Jacob Bradshaw and junior Bruce Woodbury each scored on interceptions returned for a touchdown, and Thompson and senior Jace Tenney each recorded two sacks.

Tenney and Tuenge led the defense with five tackles each and senior Ben Wilson made three tackles.