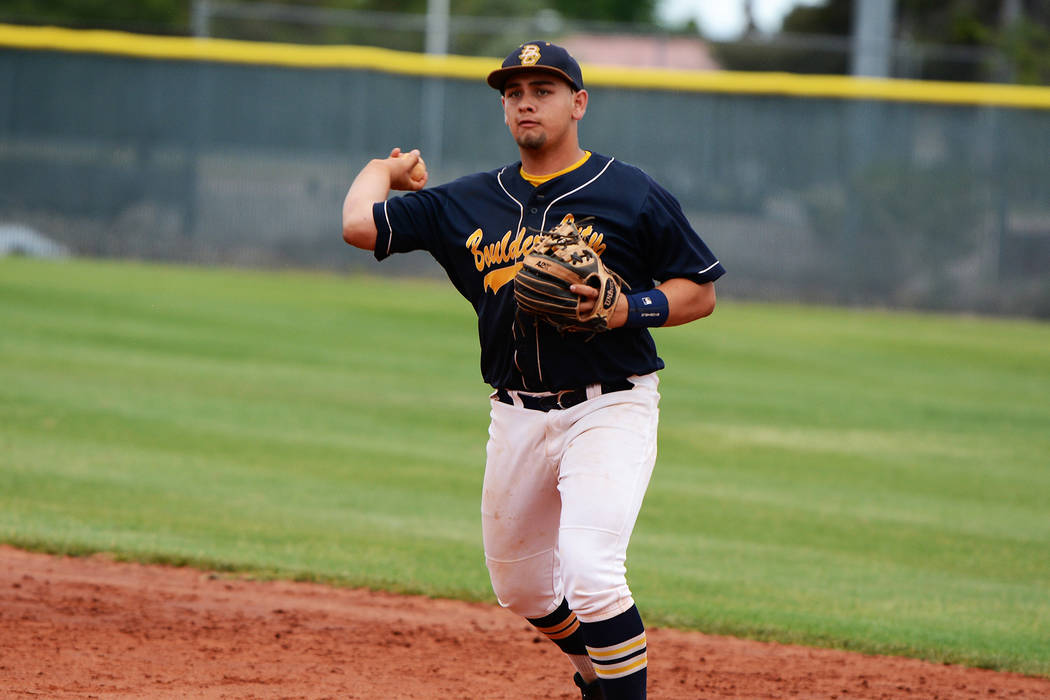 (Robert Vendettoli/Boulder City Review) Scooping up a ground ball, Boulder City High School senior Brian Miller makes a routine throw to first for the out against Mojave on Tuesday, May 7, 2019. The Eagles won the game 8-2.

Hot at the plate from the start, the Eagles exploded for three runs in the first inning and four runs in the third inning, getting the best of Mojave pitcher Mike Cianci, who Eagles head coach Ed McCann considers one of the top pitchers in town.

“I really thought the boys came together and played well,” McCann said. “We were really hitting today and the Mojave pitcher really has great stuff. He’s probably as good a pitcher we’re going to see this postseason and the boys went out there and really got after it. I couldn’t be happier with our performance.”

Leading the way for the Eagles were sophomore Blaze Trumble and junior Clark Newby, who each batted 2 for 4 at the plate with a home run and two runs batted in.

Sophomore Deavin Lopez (2 for 3) and sophomore Troy Connell (1 for 4) drove in a run apiece; sophomore Scott Bahde batted 1 for 3.

“I’ll tell you what, this sophomore group is really special,” McCann said. “We have some ball players on this team that just go out there and play lights out.”

Connell doubled as the game’s winning pitcher, throwing five innings where he allowed two runs on six hits with four strikeouts. It was Connell’s team-leading seventh victory of the season.

Riding into the playoffs with momentum, the Eagles ended their regular season May 1 against rival Virgin Valley with a 7-5 victory.

Tied 5-5 apiece heading into the top of the sixth inning, the Eagles responded with a run each in the sixth and seventh innings to end on a high note.

“I really feel like this team is coming around,” McCann said. “We haven’t really handled adversity well at all this season, but we responded against Virgin. We could of laid down and let them take that game from us, but they fought hard to win. I’m hopefully that type of play continues throughout the postseason.”

Sophomore Joey Giunta threw five innings where he allowed five runs on 10 hits with six strikeouts. Trumble (2 for 3) and Lopez (1 for 3) each drove in a run.

Results from the Eagles’ Wednesday, May 8, contest against Pahrump Valley will appear in next week’s issue.