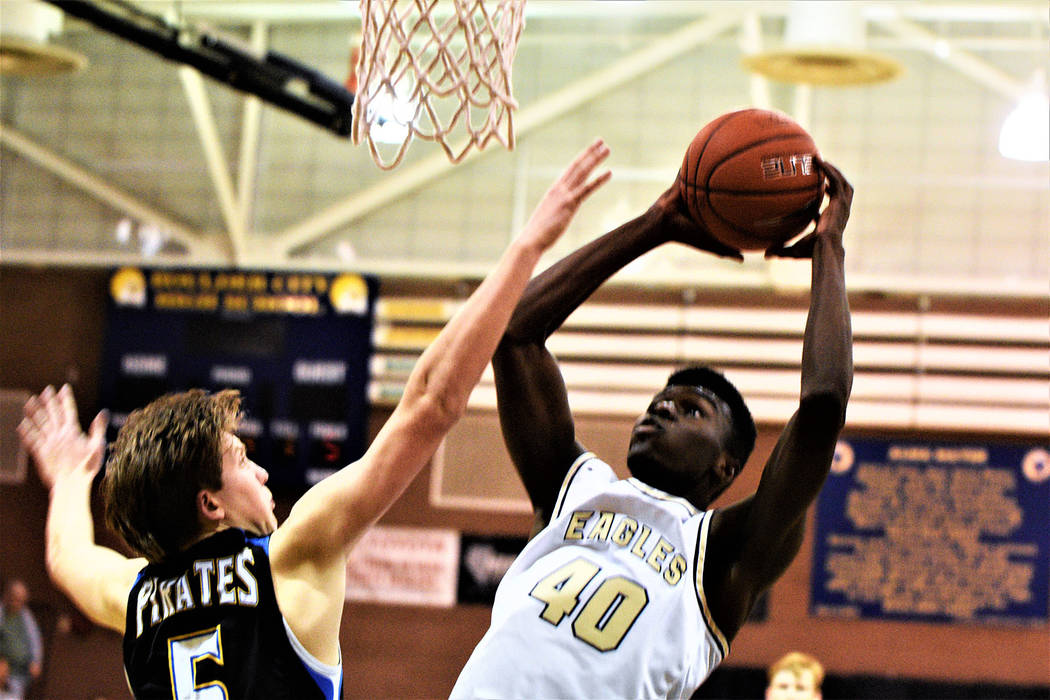 (Robert Vendettoli/Boulder City Review) Boulder City High School senior forward Jacob Sanford, seen leaning back for a fade away jump shot against Moapa Valley on Jan. 14, has become a consistent scorer for the Eagles, netting 13 points in their 61-48 victory over Virgin Valley on Jan. 16.

Playing one of their most complete games of the season, Boulder City High School boys basketball team defeated rival Virgin Valley 61-48 on Jan. 16.

“Our guys played well,” head coach John Balistere said. “Going up there is really tough. It got a little physical down the stretch, but I’m really proud of how our guys kept their composure. We got stops when we needed (them) and this is a good win for us. We showed a lot of toughness.”

Taking control of the game from wire to wire, the Eagles jumped out to a commanding 17-10 first quarter lead, never trailing in the ball game.

“Especially in that tough and physical environment, I’m pleased that they were able to take the lead and never give it up,” Balistere said. “They got within six points a few different times, but when the game was on the line, we made needed stops consistently.”

Juniors Ethan Speaker and Matt Morton led the way as the team picked up its second consecutive victory over a rival, helping the Eagles advance to 4-1 in 3A Sunrise League play and back into a first-place tie.

Finding himself consistently at the charity stripe, Morton was a perfect 10 for 10 from the free-throw line. As a unit, the Eagles shot an improved 22 for 27 (81%), well above their season team average of 69%.

“We still have a long way to go, but this was definitely a better effort,” Balistere said. “I still feel we have too many good shooters to not shoot a higher percentage as a group. I’ve told them that we need to be sharper in that area or its going to be an Achilles heel for us.”

Adding another scoring presence, senior Jacob Sanford netted 13 points with four rebounds and three steals. Becoming a consistent scorer for the Eagles, Sanford is averaging just under 9 points per game during the Eagles’ last six games, all played after winter break.

“Jacob is out wild card,” Balistere said. “He’s an energy guy and when he comes and brings energy, he’s a difference maker for us. Our other guys feed off of his energy and he gives us a whole different dimension. He’s really starting to become more consistent as the year goes on.”

Looking to continue their winning streak, the Eagles will host SLAM Academy on Friday, Jan. 24, followed by a road game against Sunrise Mountain on Monday, Jan. 27.