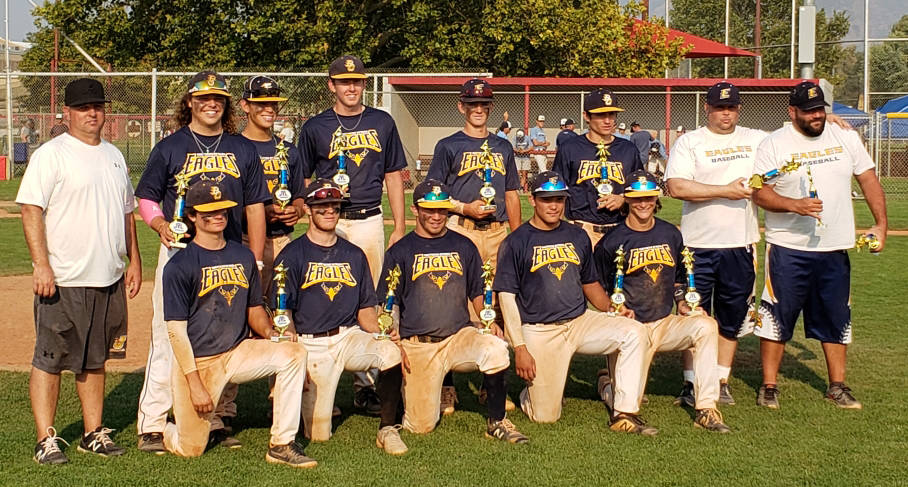 “I couldn’t be more proud of the way they played,” said coach Jeff Kinsler. “They played hard and they didn’t quit. They didn’t take any team too lightly. They battled hard and when we were faced with adversity, they rose to the challenge and did better then we ever could have imagined.”

Taking first place in the 20-team tournament, the Eagles compiled a 7-0 record, defeating opponents from Utah, Colorado and Idaho while outscoring opponents 75-9.

“The competition was tough,” Troy Connell said. “The scores may not reflect it, but there were no easy games. Every team came out to play. We just had one inning every game where we produced a lot of runs. Our defense and pitching allowed us to keep our leads.”

Shouldering a heavy load for the Eagles, Connell picked up three wins in the tournament, including an 8-2 victory over the Salem Skyhawks in the championship game.

Connell also started in a 20-0 blowout of the Grantsville Cowboys, while pitching relief in a 9-3 victory against the Skyhawks on day two of the tournament in pool play.

“I would credit my success to all the work I’ve put in these past few months,” Connell said. “I try to keep the hitter off balance with my off-speed pitches. Even if they make contact, I trust my defense behind me to make the play. I’m very pleased with the way I performed and I hope to keep helping my team win in the future.”

Starring on both sides of the game for the Eagles was Blaze Trumble, who picked up a pair of victories for the Eagles, defeating Real Athlete Academy Silver 9-0 and NC Crush Utah 13-2. Carrying a heavy bat for the Eagles, he also was responsible for several timely hits, including a pair of home runs.

“This last tournament I had a lot of success at the plate,” Trumble said. “I feel because I have been putting in a lot of work with coach (Anthony) Munoz, who has helped me change a lot of things with my swing. I was really happy with how I did because I was able to see things are paying off.”

Gaining all-around contributions on the mound, Joey Giunta picked up an 8-1 victory over Blue Chip Baseball North and Dalin Ludlow pitched in a 9-1 win over Real Athlete Academy Black.

“After winning our second tournament in a row in Utah, I think we played very good as a whole,” Trumble said. “This shows that we are able to compete with pretty much anyone when we all come together and give it our all.”