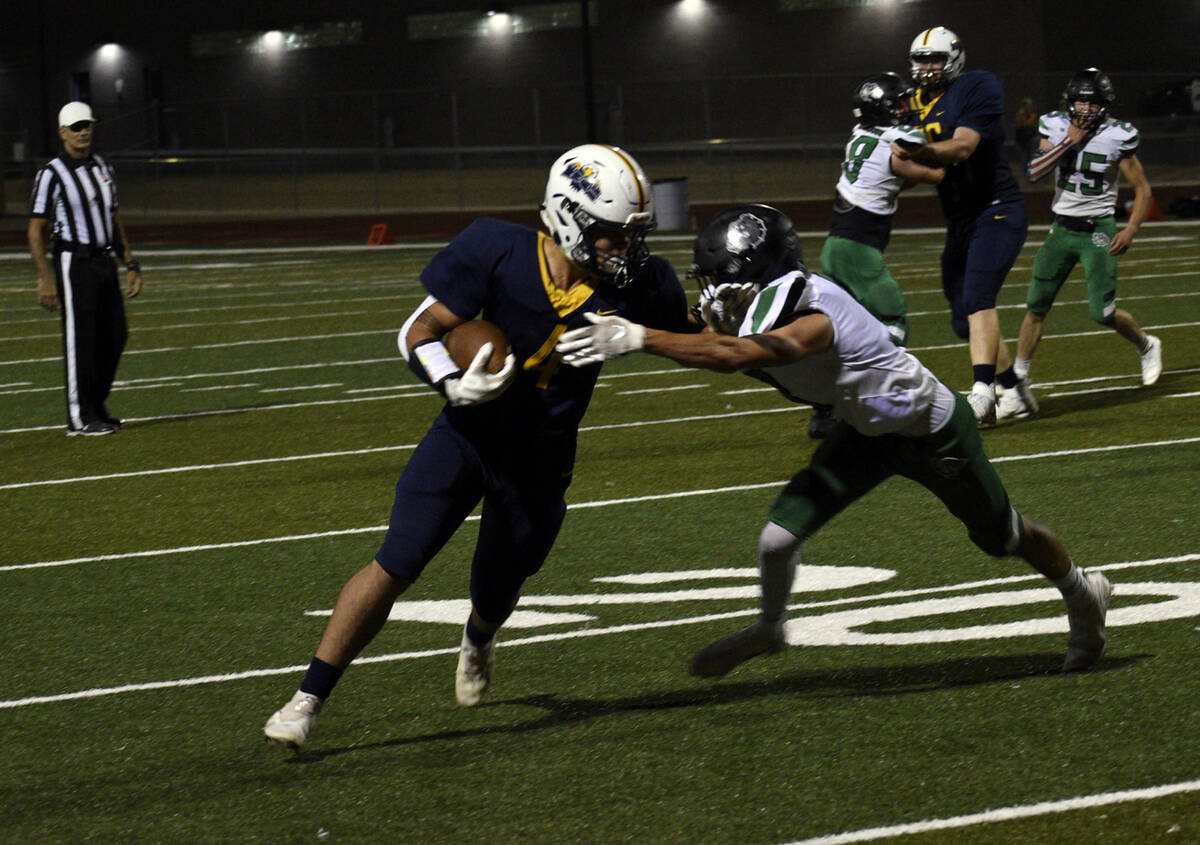 Some could say there’s cause for panic as the Eagles enter league play after losing two straight games: to the Bulldogs and rival Moapa Valley on Sept. 10. Others might look at how well the Eagles rebounded from a 28-7 halftime deficit to the Bulldogs and think the team is on its way to becoming a well-oiled machine come playoff time.

“Obviously we’re not happy that we just lost two games in a row, but the team is getting better,” head coach Chris Morelli said. “This is a young team that’s starting to get better, starting to learn from our mistakes. Our goal all season has been to win our league and that road starts this Friday.”

After a dismal first half, the Eagles played inspiring football in the second half, scoring a pair of touchdowns in the third quarter and another in the fourth.

Playing exceptionally well on defense after key halftime adjustments, junior Brayden Cook made a huge fourth-down defensive stop to give the Eagles the last possession with less than two minutes to play, before running out of gas on their Cinderella story-like comeback.

“Our defense stepped up big for us in the second half and helped us get back into the ball game,” Morelli said. “If they can play like that for the rest of the season, we’ll be tough to beat.”

Grinding out production on offense against a tough Bulldog defense, junior Hunter Moore rushed for 40 yards and three touchdowns on 19 carries, while senior quarterback Jacob Bradshaw rushed for 23 yards on three carries, highlighted by an electric 20-yard run in the fourth quarter to set up a scoring drive.

Creating a quarterback controversy heading into the week, the Eagles must decide who to turn to this week between Bradshaw, who took over in the second half against the Bulldogs, or sophomore Jacob Bryant, who has been the starter so far this season.

Along with his dynamic scramble, Bradshaw completed 4 of 8 passes for 29 yards and a touchdown, connecting with Kannon Welbourne. Welbourne caught five passes for 58 yards. Junior Torryn Pinkard caught four passes for 44 yards.

“I told both of them to go out this week in practice and win the job,” Morelli said. “We won’t know ‘til Friday who’s our starter. They both played well and we have confidence in both guys. It’s up to them to want it.”

The Eagles will host Pahrump Valley on Friday, Sept. 24.