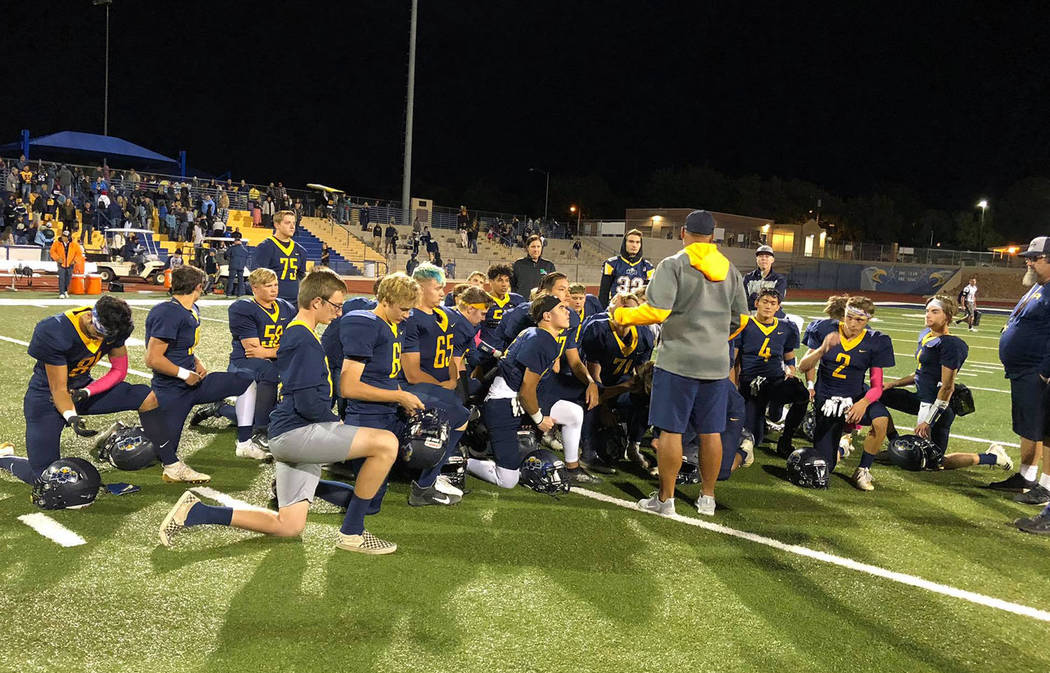 The Eagles now bring an array of confidence with them as the 3A Sunrise League’s No. 2 seed and by making the postseason for the second year in a row.

“These guys came out ready to play,” head coach Chris Morelli said. “They knew how important this game was. Win or go home, just like the playoffs will be and they responded. (I) couldn’t be more proud of this group.”

On upset alert coming into the game, the Eagles started scoring fast with a 12-yard touchdown run from senior Devon Walker.

Carrying the ball 36 times as a team to utilize the battle for time of possession, Walker rushed for 118 yards and a score on 20 carries.

“We definitely wanted to control the tempo of the game,” Morelli said. “They have the fastest quarterback we’ve seen all season, so we wanted to take the ball out of his hands and eat up as much clock as possible. We did a really good job of running the ball effectively.”

Adding to the Eagles rushing attack, senior quarterback Parker Reynolds scored on a 1-yard run in the second quarter to put the Eagles ahead 14-0 at the half.

Giving up a touchdown to the Miners in the third quarter, Reynolds later closed the door on Sunrise Mountain’s comeback hopes, connecting with junior Scott Bahde for a 14-yard touchdown strike to conclude the game 21-7.

“That was a big play for us on fourth down,” Morelli said. “The kids wanted to go for it and they came up with the play to make it work. They had confidence in themselves that they could get open and get the ball there and they executed it perfectly. It was a game changer.”

Continuing to finish the regular season strong, Reynolds connected on 7 of 11 passing for 77 yards.

Bahde led all receivers with two catches for 24 yards.

Winning the battle defensively, the Eagles come into the postseason with one of the 3A classification’s top units.

Forcing six interceptions, junior Toby Schaper and junior Klyson Kaiwi each picked off a pair of passes, while Bahde and junior Deavin Lopez each forced a turnover.

On the season, the Eagles have intercepted 14 passes.

“We have a really talented defense,” Morelli said. “Our defensive line does a great job getting after the quarterback and altering throws and our defensive backs know that when the ball is in the air, you play it like a receiver. We’ve been very effective all year at creating turnovers.”

Applying constant pressure to the quarterback, senior Cade Cowley and Sophomore Logan Freeman each generated a sack, while junior Trey Davis led the defensive effort with nine tackles, with two for a loss.

Hosting their opening round playoff match-up, the Eagles will face Del Sol on Friday, Nov.1.

The Eagles finished the regular season with a 7-2 record, with a 4-1 record in league play.