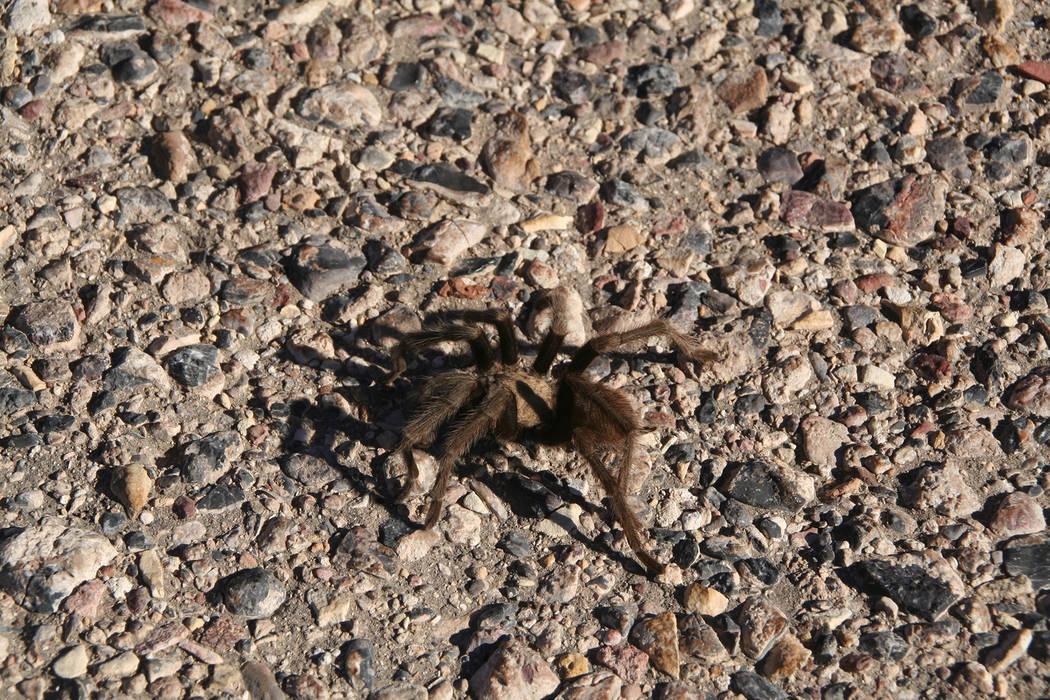 (Deborah Wall) The appearance of desert dwelling tarantulas is more common around this time of year. Although the arachnids look scary, they are generally not aggressive.

While driving or hiking some of our region’s back roads at this time of year, you might see a few tarantulas out and about. Whether you find them enchanting or are a complete arachnophobe, these eight-footed desert dwellers are interesting.

They are bigger and hairier, thus more intimidating than all our other local spiders, but are actually among the least aggressive. And their bite isn’t dangerous to most humans.

There are about 800 tarantula species worldwide, and about 50 of those species live in the American Southwest. Mature tarantulas in our region are usually one-half inch to 4 inches long, pretty small compared to a variety in Venezuela that has an 11-inch leg span.

I have seen dozens of tarantulas and many times I would see them walking around within a mile or so of each other. I’ve seen large numbers of them on roads and trails in Death Valley, around Lake Mead, in northwestern Arizona and even as far north as Pioche, Nevada .

Be aware of their presence and if you see something on the road that looks out of place, it could possibly be a tarantula; be careful not to run over it.

Females often live about 30 years while males survive only five to 10 years. One theory is the males’ sexual desire causes their short life expectancy. In search of females, they often wander about during the day, on roads where they might get flattened and in full view of predators looking for a tasty meal.

Once they find a female and mate, they need to get on their way quickly because female tarantulas are hungry after sex and a male could possibly be milady’s next meal. The female then has a six-to-nine-week incubation period and once her eggs hatch there will be about 500 to 1,000 young.

Our tarantula friends here in the Southwest have two methods of defense. They bite like other spiders, but they also have specialized hairs on their abdomens that they can throw at their enemies. If you are on the receiving end of the hairs, you can expect irritation resembling that caused by the stinging nettle plant.

Be aware though, that if you get them in your eyes or inhale them, it could be more serious. When the tarantula bites it feels like a bee sting and that’s usually the end of it, but some people could be highly allergic to them.

Many folks realize that tarantulas are gentle souls and some, therefore, try to show off by lifting the scary-looking spiders and letting them crawl on the human’s hand. This can cause stress to the spider and if it should fall, it will probably die from a fracture of its fragile exoskeleton. Best advice if you come upon a tarantula: Look and admire, but leave it alone.