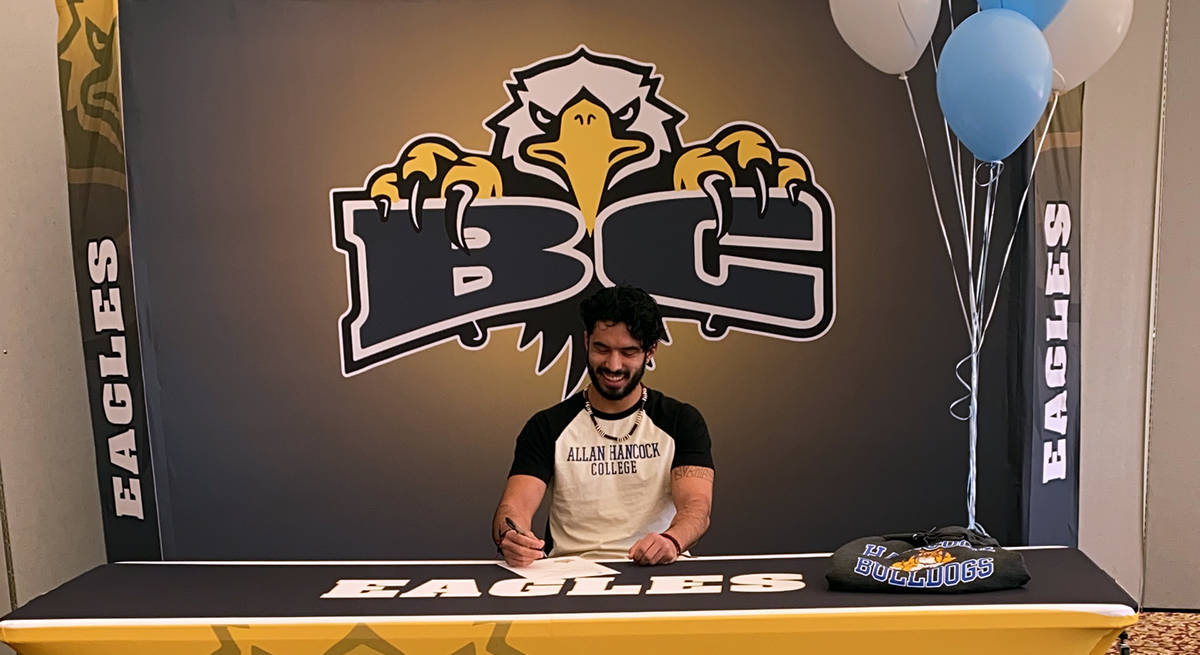 (Davis family) Trey Davis, a senior at Boulder City High School, signs his letter of intent to play football at Allan Hancock College, a community college in Santa Maria, California, during an event at Boulder Creek Golf Club on Feb. 5, 2021.

A successful junior college program in Santa Maria, California, Davis joins an impressive Bulldogs team that finished with a 9-2 record in 2019.

“I chose Allan Hancock College because I wanted to stay somewhat close to home and they are giving me a great opportunity to continue to play football and work my way up to Division I level,” Davis said.

“It is a huge blessing being able to say that I am now a college athlete,” Davis said. “It has been my dream to grow up and play football at the next level and hopefully someday make it to the league. It is still going to require a lot of hard work and dedication, but I feel that going to this school will improve my chances at becoming great. I want to be one of the great kids to come out of BCHS doing something that they love.”

A rising senior before the COVID-19 pandemic put an end to his prep career, the commitment will give Davis the chance to attract Division I recruiters during the next two seasons, after also considering Division II program University of Mary in Bismarck, North Dakota.

“I think that missing out on my senior season had a major impact on the recruiting process, not only for me but for every other student athlete,” Davis said. “For me personally, it made it difficult to have enough good film to show all of these different schools so that they could see my talent. We were bound to have an amazing season this year with all of our weapons on both sides of the ball.”

Coming into his own as a junior for the Eagles, which finished with an 8-3 record and a playoff berth, Davis was a key catalyst on offense, using his 6-foot-1 frame to win many position battles.

The Eagles’ leading receiver as a junior, Davis caught 38 passes for 455 yards and two touchdowns.

An athletic two-way threat for the program, a testament to his high motor, Davis doubled as a linebacker, making 73 tackles with three sacks.

“We are really excited for Trey and know he will excel at the next level,” Morelli said. “He has all the tools to be an exceptional college athlete and we look forward to following him. He, along with this senior class, set a high standard for the next group. Allan Hancock College is getting a great young man.”