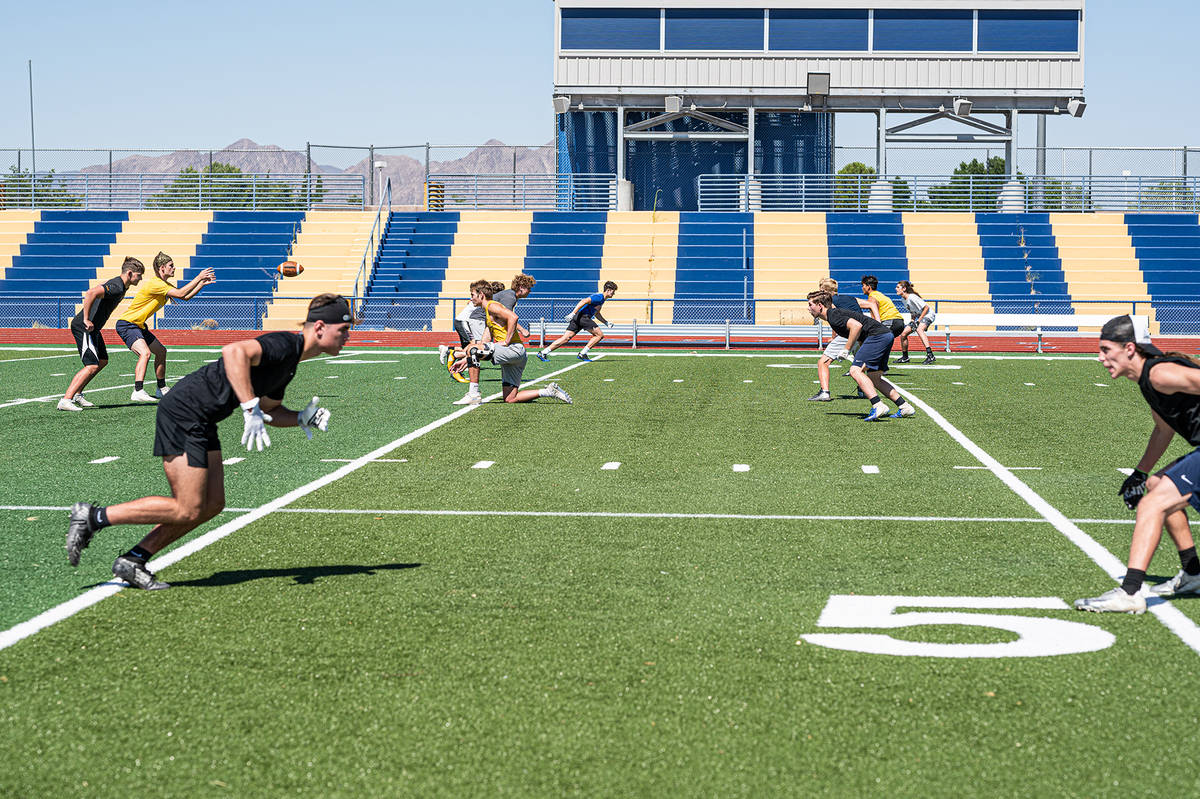 Returning to phase one of COVID-19 restrictions, the Southern Nevada Football Coaches Association has outlined a plan for fall sports and sent a proposal to school administrators, the Clark County School District and Nevada Interscholastic Activities Association officials, in hopes of saving their upcoming season.

“The biggest reason for our proposal, was there was currently no plan in place … for our upcoming high school football season,” said Chris Morelli, Boulder City High School head football coach. “We were scheduled to hand out helmets and start contact drills on the 30th (July) which we knew as coaches we couldn’t do, now that we’re going back to phase one. As coaches, we came together as an organization, with two outlined plans we’d like to see done in order to have a football season.”

One of the proposed plans calls for a shortened season later this fall, if Nevada can reach phase three of reopening. Under the second plan, the season would start in February, similar to what California and New Mexico have proposed.

“Currently there’s no decision on which plan we’re going to move forward with right now, but the NIAA has been in contact with us,” Morelli said. “The whole goal is to not have to scrap the season, like spring sports had to. Right now we’re staying current with the condition our state is in and we’re trying to make something happen.”

If the first option is chosen, practices could resume Sept. 7, assuming it is safe to do so. The shortened seven-week, six-game season would begin on Sept. 25. Playoff schedules would be condensed to three rounds, with state championship games being played on Nov. 28, one week later than originally scheduled.

If the second proposal is chosen, practice would begin on Feb. 15, and the season would start March 4. The same regular-season and playoff format would be used, and state championship games would be played on May 8.

Should fall athletics get postponed until February, Morelli noted potential scheduling problems could arise with both winter and spring sports, but is confident that a plan can be constructed to make sure everything runs smoothly.

“We’re hoping all sports get the opportunity to play this season,” Morelli said. “If we can’t go this fall, we’d like all fall sports to be moved to February with a condensed schedule and then hopefully condensing both winter and spring … so there isn’t much of an overlap. Basketball, wrestling, baseball, those are all sports that can play twice a week, so we’re really hopeful that everyone can get creative and come up with a solution. There would be a lot that needs to be done for this to happen. We’d be condensing a nine-month calendar into six months, assuming winter sports start on time.”

Along with potential scheduling conflicts, the Eagles, along with several other programs in the 3A classification could suffer from a player shortage because of players who participate during all three sports calendars. To help that issue, the SNFCA proposal suggested a one-time waiver for athletes to be allowed to compete in more than one sport at a time.

“Being a small school having to go through these condensed schedules is going to affect us a lot,” Morelli said. “It’s really going to hurt all the smaller schools in the 3A who rely on two-and three-sport athletes if they can only play one sport, but whatever sport our athletes decide to play, as coaches, we’re going to help them pursue that and get them film and hopefully opportunities to get to college.”

The SNFCA has agreed to shut down their teams’ summer strength and conditioning programs as of July 21, in hopes of keeping their players safe and help flatten the COVID-19 curve.

“In order to have a game plan, the coaches’ association agreed that it was best to suspend practices for the time being,” Morelli said. “We could be practicing for the next six months if we needed to, to play football, but where is that getting us? We wanted to limit these kids to the exposure of the virus, so as coaches we agreed to stand still right now and continue to follow the data and see where we stand as a state in 30 days, 60 days and 90 days.”

The next step to ensure a high school football season and all fall athletics will be getting the state into phase three of reopening.

“If the school board comes back to us in September and says we’re moving into phase three, we will be ready to play a condensed season,” Morelli said. “As of right now, it’s just a wait-and-see approach to how our state responds to the COVID-19 outbreak. We’re all very hopeful that this can happen and everyone plays their part to help stop the spread of this disease. If we can’t make it to phase three, then we won’t have a football season, regardless of whether it’s now or in February.”