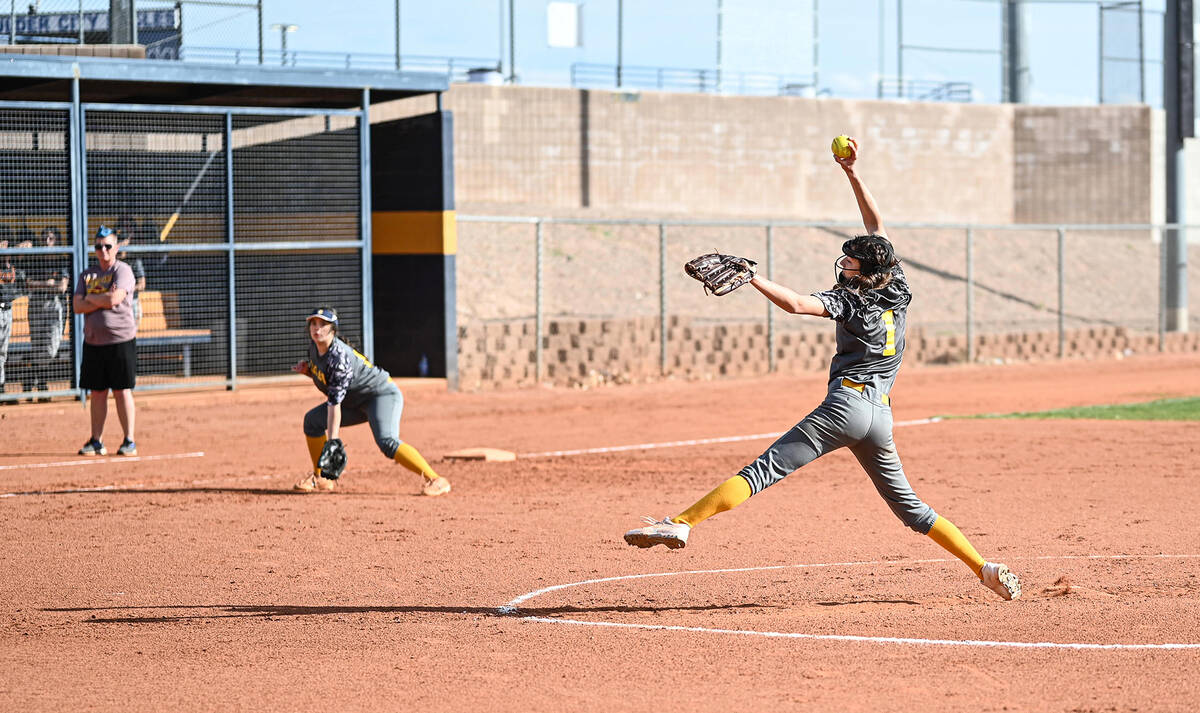 (Jamie Jane/Boulder City Review) Alyssa Bryant, seen pitching in 2020 when she was a sophomore at Boulder City High School, is expected to be one of the key contributors to this year's season for the Lady Eagles.

Boulder City High School’s softball team will once again look to claim its place among the top 3A programs, having last appeared in the state tournament in 2019.

Head coach Anjelica Moorhead said she is confident in this year’s team as it brings back its ace on the mound and key offensive components from last season’s roster, after playing a shortened 2021 schedule due to the COVID-19 pandemic.

“The expectation for this year’s team is like any other year,” Moorhead said. “We want to get to the state tournament in May. We have five seniors, two juniors, three sophomores and three freshman this year. They’re working hard and ready to play.”

Senior pitcher Alyssa Bryant returns as the Lady Eagles’ ace, having three years of varsity experience under her belt. In her shortened junior season, Bryant recorded a 3-2 record with 41 strikeouts.

“We’re super excited she will get the chance to throw her senior year, for a whole season,” Moorhead said.

A two-way contributor for the Lady Eagles, Bryant will team with seniors Paeton Carver, Lily Hood, Samantha Bahde and Jaiden Van Diest as key players in the lineup.

“We are so lucky to have our five seniors leading the way,” Moorhead said. “They’ve have been playing together since they were 10 years old. They have great chemistry and are amazing leaders in our program.”

Sophomore Alexis Farrar returns after a freshman campaign where she batted .296 with 10 RBIs. She’ll team with sophomores Talynn Madrid and Jordyn Wetherbee, and freshmen Kylie Czubernat, Gabby Andrews and Baylee Cook as part of the Lady Eagles’ core of underclassmen.

Starting their season in the Colorado River Invite at Needles High School, the Lady Eagles will take on California programs Big Bear and Indio today, March 3, followed by a matchup with Palo Verde Valley on Friday, March 4.