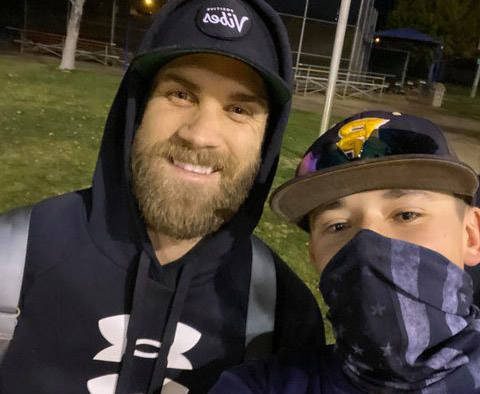 (Katie Kilar) Bryce Harper, left, who was raised in Las Vegas and now plays for the Philadelphia Phillies, takes a photo with Dodger Smith, a freshman at Boulder City High School, during a Dec. 10, 2020, visit to a fall high school league event sponsored by Boulder City Little League.

Previously having to travel to Utah in order to find competition, Boulder City Black Sox competed against several top local teams at Veterans’ Memorial Park from Nov. 10 to Dec. 10, before the league came to a halt due to a recent spike in numbers during the COVID-19 pandemic.

“The boys needed a place to play and luckily we had a field and submitted a plan to the state to play,” said Boulder City Little League President Katie Kilar. “They were able to compete against a lot of the higher 5A teams in a row and see some great competition.”

“It was pretty cool that he came to watch some high school ball games in Boulder,” junior Izec Easter said. “I was nervous to approach him but when I did, he was super cool and we took pictures and he signed some baseballs.”

Playing against several Division I baseball commits and future Major League Baseball prospects, the opportunity served as a great measuring stick for the Black Sox’s young roster, which played with most of the high school’s junior varsity roster from last year, but also gave them the opportunity to be kids again during this pandemic in which they’ve mostly been locked down.

“Just to have a small sense of normalcy has been gratifying,” league organizer Robert Persona said. “Baseball is life-changing for a lot of people. This year has been a struggle to say the least. We’ve had pro scouts, agents and some pro players out at the games. Been pretty cool to get back to it.”

Despite going 0-8 in the fall league, the Black Sox remained competitive with a makeshift roster of Boulder City varsity and junior varsity players, while gaining some help from a few players at Basic High School and one each from Green Valley and SLAM Academy.

“This was a learning experience for them,” said head coach Matt Kilar. “We knew what we were getting into. We had some really good, solid innings holding those teams. Our roster and experience weren’t as deep as most of those programs. We put a team together just ten days before the league started. They competed.”

Highlighting the team, Easter led the way with a .364 batting average, facing elite competition on a nightly basis, while junior Dylan Spencer batted .333.

Gaining valuable innings before he heads into his final season with the varsity program, senior Seth Hartgroves was the team’s workhorse pitcher, facing 103 batters.

The next hope for baseball in Boulder City will be this spring, with the high school season currently slated to play from April 16 to May 22. If, for whatever reason cancellations occur from the Nevada Interscholastic Athletic Association, Harrison said he could definitely see a spring league come about if safe to do so.

“I think this model was very successful,” Harrison said. “A lot of the top teams in town were playing and it was great to see them back out on the field after missing out on high school ball last year. We’re hopeful the high school season gets to be played this year, but if it doesn’t, we would definitely try to help put something together for the spring so these guys don’t miss out on playing two years in a row. We’re still in the infancy stages of talking, but after seeing the fall league come together, I definitely believe it’s something we can put together.”