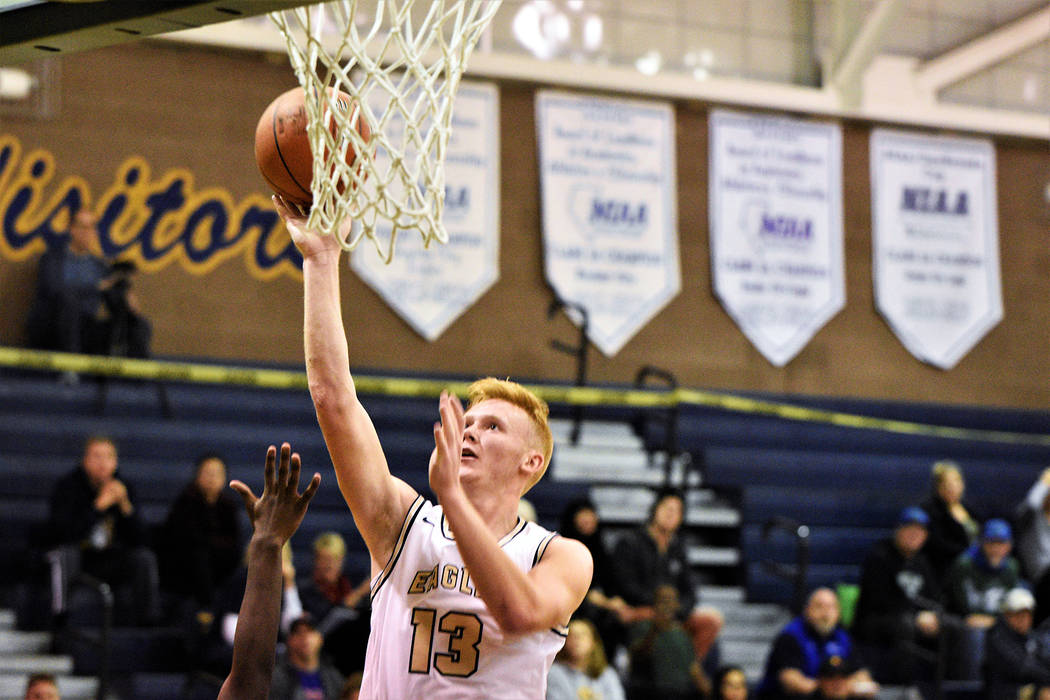 Currently 2-0 in league play, the Eagles acknowledged that they play with a certain level of intensity during league matchups, expecting nothing less than another banner hanging in the gym after this season.

“As defending league champions, we all expect nothing less than to be the champions again,” junior Matt Morton said. “Every team in our league now has our number and wants to come for our spot. It’s up to us to work our hardest and defend that title.”

Morton scored 13 points against the Miners, with a game-high 14 rebounds. Junior Ethan Speaker poured in a game-high 25 points with 12 rebounds. Cleaning the glass routinely, Speaker brought down five offensive rebounds.

“I really liked the way we played against Sunrise Mountain,” head coach John Balistere said. “Matt and Ethan both having a double-double was huge for us. They should have one each time they step on the court.”

Currently 5-4 on the season, the Eagles have established dominance early in league play but remain far from a finished product.

Playing up in classification against 4A Canyon Springs on Dec. 12, the Eagles fell 55-35, doomed by a 20-4 third-quarter run by the Pioneers.

“I thought we played well at times, but that third quarter was killer for us,” John Balistere said. “We got too careless with the ball and didn’t play fundamentally sound basketball. Again that’s something that will get better with practice as we continue through the season.”

Trailing only 31-25 at halftime, the Eagles fell apart in the second half of a winnable game but found a silver lining in their defeat.

“The loss to Canyon Springs really helped us find out what our team identity is,” Morton said. “It helped show us what aspects of our game we need to improve in order to be a playoff-caliber team.”

Experiencing some highs and lows to start the season, the Eagles will now hit the road, traveling to California for the Orange Holiday Tournament.

Hopeful to pick up a few victories and some added team chemistry, coach Balistere is looking forward to the trip.

“We’re excited for our four games down there, but I’m really excited about this team being able to bond together,” he said. “We’re going to be there for five days with an off day, so it will really allow some of their guys who don’t really know each other on a personal level to get closer. We’ll be doing a lot of group activities, and that will only benefit us on the court in the long run.”

The Eagles will open play on Dec. 26 against Warren.