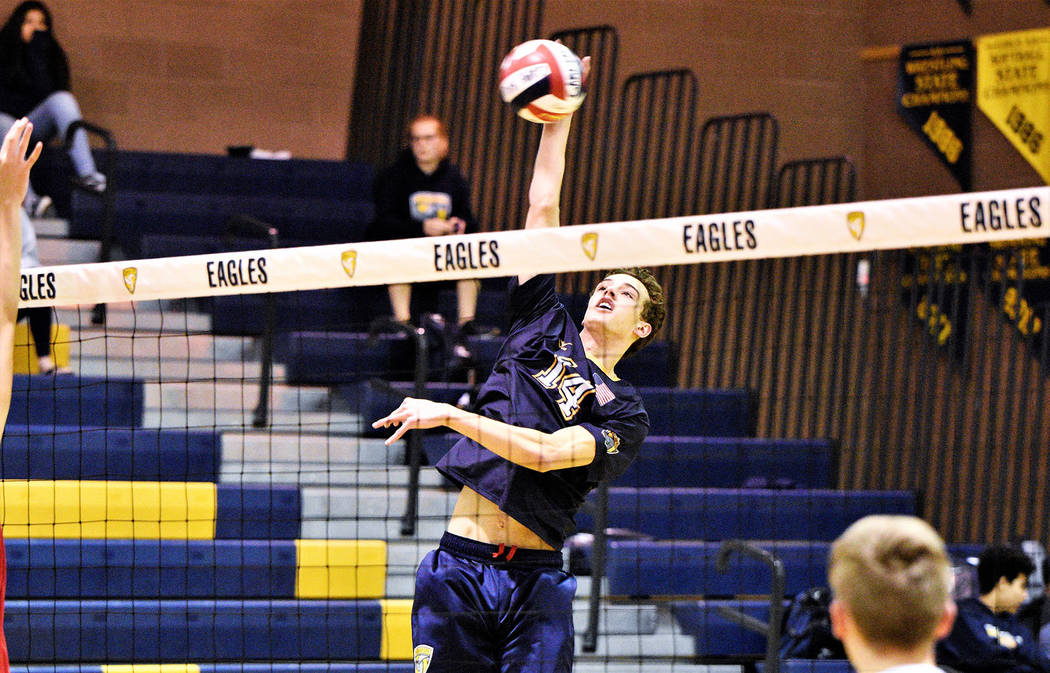 (Robert Vendettoli/Boulder City Review) Karson Bailey, a senior at Boulder City High School, seen rising up for a kill against Somerset Academy Sky Pointe on April 8, was named to the All-Southern Nevada first-team.

“Earning a spot on first team was an amazing honor,” Bailey said. “I thought that I improved a lot from last season in many aspects of the game and I’m really happy with the way I played all year. I know I did my best to help the team win games and I am grateful that my efforts were recognized this year.”

He was one of five Eagles who earned postseason accolades.

In the third year of their existence, the Eagles turned the corner as a program, winning 24 games this season and making it to the 3A state semifinals.

“I was excited that we had five players honored by our conference,” head coach Rachelle Huxford said. “Everyone worked really hard to make our team successful. I know next year we will be seeking redemption and each one of these players will be important to that success.”

Playing key roles in this season’s success offensively, Bailey and Jorgensen were two of the four players to make the Southern Nevada first team, solidifying themselves as premier players within the 3A classification.

Working together as a ferocious scoring tandem, Jorgensen led the Eagles with 399 kills, while Bailey tallied 382.

“I‘m proud of the hard work Preston and Karson put into their performances this season,” Huxford said. “Each of them were a key component to our success this season. Preston and Karson were a force to be reckoned with on the net. They both put up big numbers hitting and blocking. It was a well-deserved accolade.”

Making the Southern Nevada second team was junior Boen Huxford, who led the Eagles with 494 assists, while generating 142 digs 96 kills and 36 blocks.

“I’m glad Boen was recognized as well,” Rachelle Huxford said. “Setting isn’t a glory job but it is an important foundation for a successful season. He was also our best server and puts up powerful block as well. I know that Boen and Preston are excited for next season and will definitely be a force to be reckoned with.”