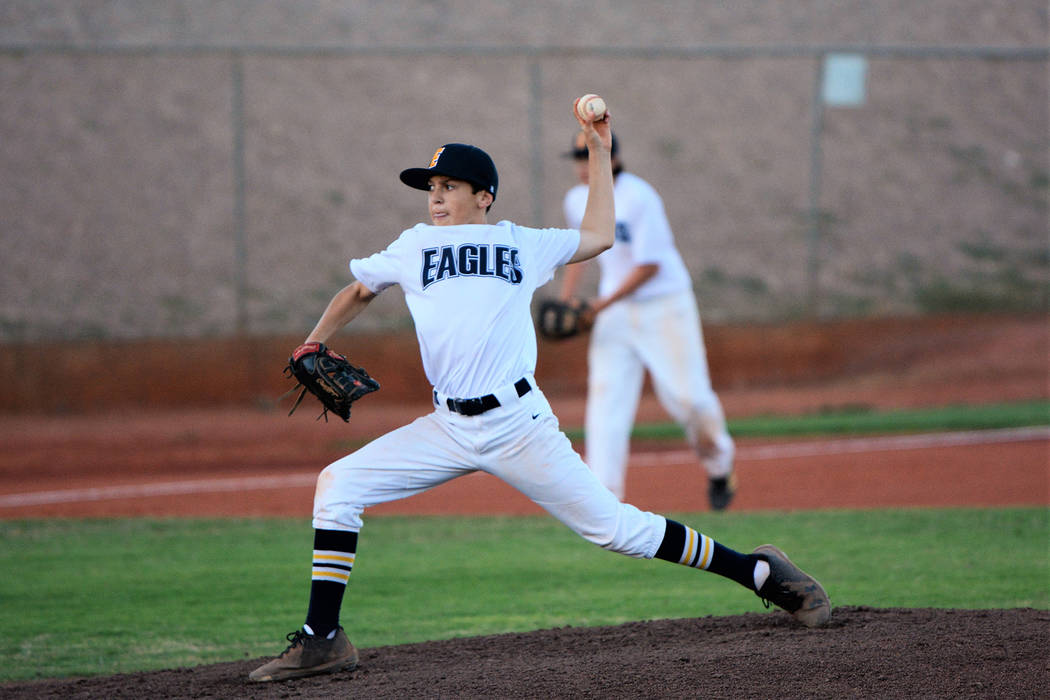 (Robert Vendettoli/Boulder City Review) Ben Schaffler throws a strike against Palo Verde in the Southern Nevada Eagles 14U game June 22. The team split a doubleheader against Pahrump on June 28 in games that matched the intensity of a high school rivalry.

Splitting a doubleheader with Pahrump Valley, Southern Nevada Eagles 14U coach Alex Moore said Friday’s atmosphere rivaled that of a high school postseason game, with more on the line than just a victory in the Southern Nevada Connie Mack League.

“The atmosphere provided a great experience,” Moore said. “The fans were good from both sides, very into the game; it was how baseball is supposed to be played. I talked to the kids before the game and expressed how this is a rivalry. I let them know that this is the team to beat in the 3A.”

Falling in game one to the Trojans 5-3, the Eagles weren’t able to capitalize off a gem from pitcher Dodger Smith.

Throwing four innings, Smith allowed just one earned run against the Trojans but was unable to overcome five errors that led to four runs.

“The first game we should have won,” Moore said. “We made a few costly errors and couldn’t take advantage of Dodger Smith pitching the game of his life. A lot of their runs score came off of our errors, so we need to do a better job defensively and protect our pitcher.”

Rallying back in game two with a vengeance, the Eagles held off Pahrump Valley 10-8 behind strong performances from David Wagner and Caleb Brown at the plate.

“The boys were fired up in game two,” Moore said. “We came out swinging and were back and forth with them for a few innings. Fortunately, we are able to string together a couple of hits and score some runs to take the game over.

Helping the Eagles put together 11 hits, Wagner finished 3 for 3 with three runs batted in; Brown finished 1 for 1 with a pair of RBIs.

“I thought both of those guys played awesome,” Moore said. “They stepped up when we had guys on base and drove them home. We’ve had a lot of guys step up for us this summer. It’s been really fun to watch.”

On the mound in game two, Wagner proved to be a two-way star, earning the victory after throwing three innings where he struck out seven batters.