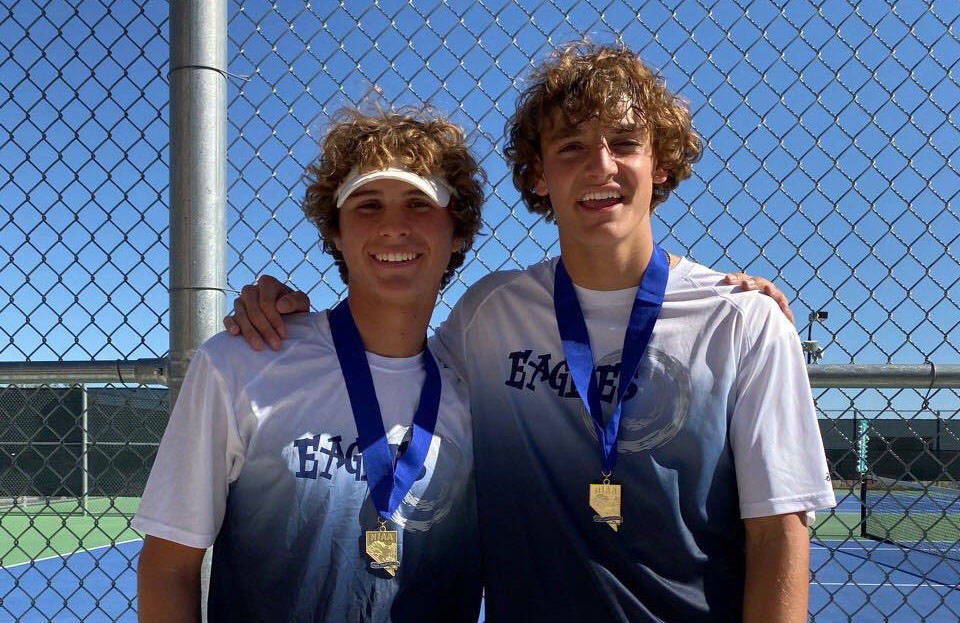 A team featuring a majority of seniors, the Eagles put the finishing touches on their legacy, defeating rival The Meadows 10-7.

“I’m so proud of this group,” head coach Rachelle Huxford said. “It’s been an amazing three-year journey with them and it’s been a privilege to coach them and see them grow as players. We’ve accomplished something that not a lot of teams can say they have. These boys have put in the work all season and they deserve everything they’ve gotten.”

Coming a long way from their season-opening loss to the Mustangs, the Eagles showed resiliency this postseason, defeating The Meadows in both the regional and state championship games.

“This group worked really hard to get here,” Huxford said. “They’ve had a target on them and they’ve accepted the challenge. Every day in practice, they gave it their all and worked to be better players.”

Key in the Eagles’ victory were senior Connor Mikkelson, who went 3-0 in singles play, and the senior doubles tandem of Boen Huxford and Preston Jorgensen, who went 3-0.

“It was an all out effort from the team,” Rachelle Huxford said. “We got the points we felt confident about heading into the match and the Rose brothers came up big for us and won two matches.”

Falling just short of matching the boys’ efforts, the Lady Eagles fell to The Meadows 10-6 in the championship game, finishing as the 3A state runner-up.

“I’m very proud of my girls,” head coach Jami Pappas said. “They played hard and the chips fell. Every time we played Meadows our score increased. It is important for the girls to improve over their last match and get better. They have done that all year. I could not be more proud of their efforts. We left it all out there on the court on Friday, with no regret or remorse.”

“It was really nice to see them defend their title and repeat,” Rachelle Huxford said. “They’ve grown so much together throughout the last four years and it was bittersweet to see their last match. They were really on their game on Saturday. The way they were playing, I’m not sure anyone could beat them.”

“Olivia and Tegan winning at state is amazing for Boulder City High School,” Jami Pappas said. “They made history together; it’s never been done before. It’s such a honor for these girls to take the state title. Two great girls so deserving of this honor. I am thrilled for them and for the community and high school. It was a great season.”

Rounding out individual tournament play, Connor Mikkelson finished as the state runner-up in singles play, falling to Western’s Rua Elmore 6-3, 7-5. The doubles tandem of Pendleton and Soileau finished fourth, as did Fox and Gibbs.