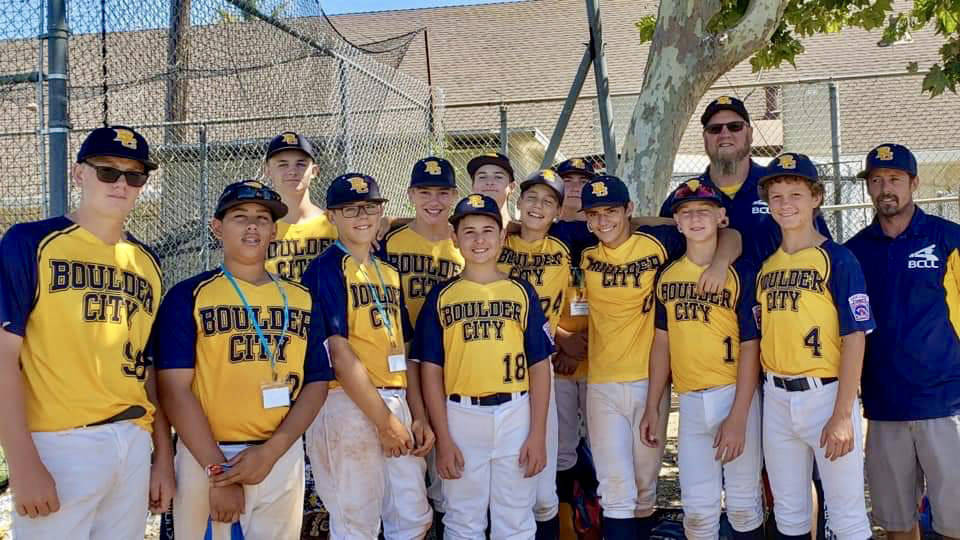 (Mary Ellen Smith) Members of the the Boulder City Little League Junior All-Stars team gather July 27 after a 15-7 victory against Utah in the Western Regionals at Steindorf Field in San Jose, California.

The Boulder City Little League Junior All-Stars were knocked out of the Western Regional tournament with a 1-2 record after falling to Northern California 13-0 on Aug. 1.

“Overall, I’m happy with what we were able to accomplish,” he said. “They played with a lot of heart and kept their heads held high.”

Boulder City trailed 4-0 heading into the top of the sixth inning at its game against Northern California on Aug. 1 before allowing nine runs that ended the game with a mercy ruling.

“The score isn’t really an indication of how the game went,” Spencer said. “We didn’t have the defensive errors that we’ve had in the past. Pitching was on point for the most part; we just ran into a team that could flat out hit. They hit balls into the gaps and knew where to put it.”

Facing its toughest competition of the tournament, Boulder City was only able to muster four hits on offense, opposed to 20 combined in its first two games.

Charlie Stewart finished 1 for 2 at the plate, while Hunter Moore, Dylan Spencer and Jeremy Spencer all batted 1 for 3 on the day.

Dylan Spencer belted a double at the plate for Boulder City’s lone extra base hit.

“They got really hot in that sixth inning,” Clint Spencer said. “It didn’t matter what we were throwing at them; they were putting a bat on it.

“It’s hard to defend when nothing’s getting past them. It was like we were throwing beach balls at them and they were swinging.”

Boulder City defeated Utah 15-7 in game one of the regional tournament before falling to Oregon 4-3.

“This was a great season for us,” Clint Spencer said. “Not only for myself in my last year of coaching but for these kids who are going into high school. It’s cool for them to get something like this under their belts. A lot of kids never have the opportunity to experience something like this.”