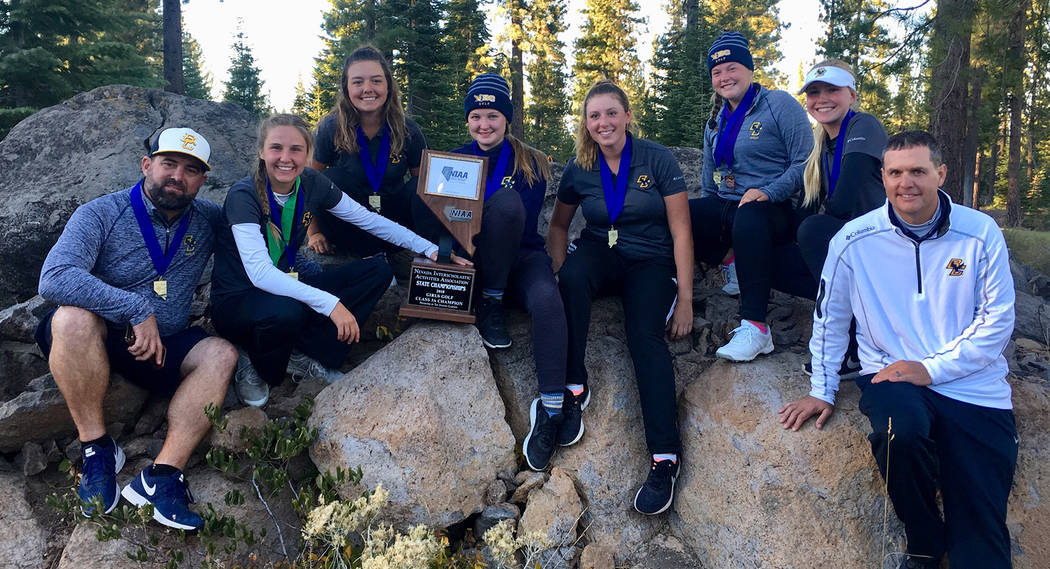 Boulder City High School has been named the One Nevada Cup winner for the 3A classification for the third consecutive year for outstanding academics and athletics. The school's teams, including girls golf, have won four state championships during the 2018-2019 year.

Displaying excellence in both athletics and academics, Boulder City High School has been named the One Nevada Cup winner for the 3A classification for the third consecutive year.

Awarded the honor for their performances in the classrooms, at sporting venues and with the citizenship through sports initiative, the Eagles recorded a score of 3,471, the third highest total in 3A history, beating out Northern challenger Truckee (3,098) and rival Moapa Valley (2,518).

This will be the 10th year the Eagles have received the honor.

“I think its a great representation of our school,” athletic director Alex Moore said. “We try our best athletically in each sport, but I feel what stands out about us is we preach academics and we have great kids who take being student-athletes serious.”

Each sport fielded at Boulder City High School made the postseason athletically this season.

“The thing that stands out to me is our kids want to succeed,” Moore said. “We have great coaches in every sport who teach the game and want the best for their players and the kids really buy into that and want to do their best for their school. The school pride that everyone has is incredible and that starts with the players and goes all the way up to the coaches and administration. We’re a very close community.”

Setting the tone for being the best they can be on the playing field and in the classroom, the student population also relishes this honor.

“I think it was awesome that our school was able to win the cup,” senior girls swimmer Aimee Garcia said. “Our community has a tremendous amount of outstanding athletes who not only push themselves to become better players but who also excel in the classroom. It’s amazing to see how all our hard work paid off.”

The Nevada Interscholastic Activities Association and One Nevada will honor Boulder City High School with a championship banner and commemorative trophy in August.