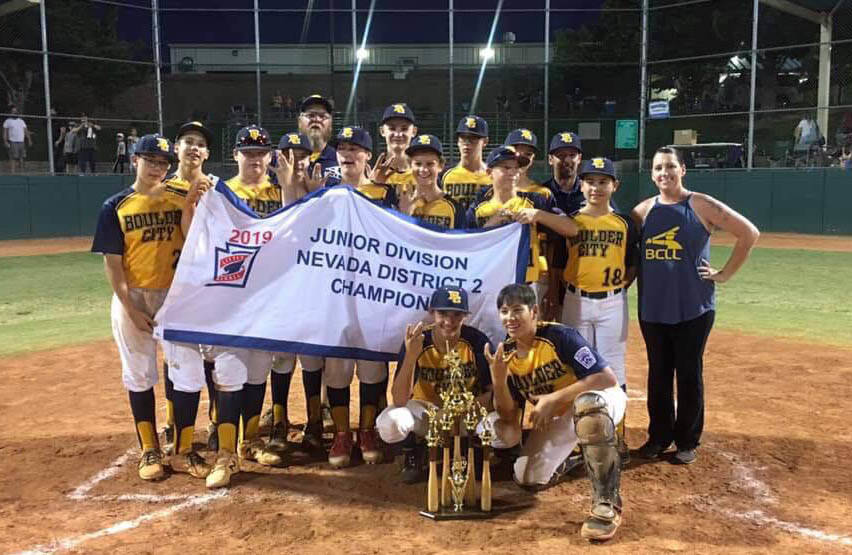 Making it back to the state tournament for the third consecutive season, Boulder City beat Henderson Little League 13-3 in the District II championship game June 26.

“The level of excitement the team has is off the charts,” head coach Clint Spencer said. “Keeping them focused on practice sometimes is a job in itself because they just want the games to start. I’m not sure who is more excited, the players returning to their second state tournament for a another chance at the title or some of the players getting their first experience of the state tournament and the exciting environment it brings.”

Swarming Henderson in the district championship game, Boulder City opened with a nine-run first inning before ending the game in five innings.

Collecting 16 hits as a unit, 10 players got a base hit for Boulder City. Dylan Spencer shut down Henderson on the mound, pitching four innings where he allowed three unearned runs on one hit and five strikeouts.

At the plate, Brayden Cook finished 2 for 2 with three runs batted in and Spencer finished 3 for 3 with an RBI double.

Carrying a big stick at the plate, Jeremy Spencer batted 3 for 4 with a double and a triple. Dodger Smith batted 2 for 3 with two RBIs and a triple. Cameron Calvez (1 for 4) added a triple for Boulder City and Connor Solberg finished 1 for 1 with a double.

A group that has stuck together throughout the years, coach Spencer said he believes this could be the year the boys win the state tournament. Featuring a roster that has played a majority of the summer in the Nevada Connie Mack 14U league, Boulder City is battle tested and ready for the challenge.

“I’m confident these young men have put in the work on the practice field and in the cages to do what they need to do,” he said. “They played on a very successful Connie Mack team, giving us more live game situations to improve our skills as a well-oiled machine. It’s an overwhelming feeling of success as a coach and for the players to win the district twice, when only a few short years ago these boys had some rough experiences at districts. They all stuck together and gelled together as an awesome team and friends.”