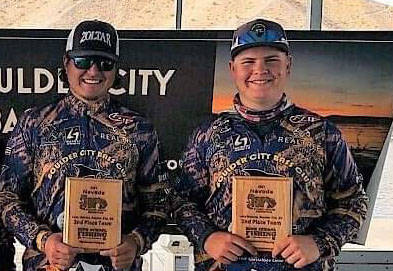 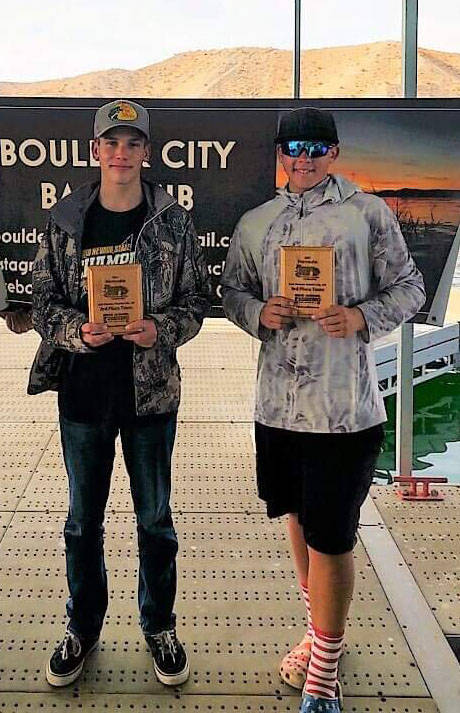 Representing Nevada at nationals, the teams of Corey Williams and Izec Easter, and Charlie Stewart and Dodger Smith, will travel to Anderson, South Carolina, after the state was awarded a second bid when the national championship was canceled last year because of COVID-19. Easter and Williams also qualified last year.

This will be Williams and Easter’s redemption trip and their last high school fishing event together.

“Having last year’s nationals being canceled and still being able to qualify for it this year makes it more special for me since I’m in my junior year now and time is running out,” Easter said. “I’m glad Corey and I get another chance.”

Finishing in second place at the state championship on a cold and windy day at Lake Mohave, Williams and Easter brought in a total of 5.80 pounds for the event.

Fellow Boulder City Bass Club members Carter Doren and Kyle Luis finished first at state with a total to 10.15 pounds, but may not be making the trip to nationals.

Doren is looking for a new partner for Luis in time for the nationals, which run simultaneously with the world championships.

Finishing in third place and earning a national bid, the freshman duo of Stewart and Smith brought in a total of 4.5 pounds.

Excited to make the trip to South Carolina, Smith said he is looking forward to the experience, hoping to gain knowledge on what it will take to be a better angler and make multiple national appearances.

“When I was first told that I had qualified I was very excited,” Smith said. “I was so excited that I had a hard time sleeping for like a week just thinking about the fishing tournament. I think that going as a freshman is really important so you can improve and expand your knowledge so that you have a better chance of getting to go again. If I do get to go again, I will better understand how to fish in those southeastern states so I will be able to do better in the tournaments. I also think that it will just be a good experience to be able to fish on more bodies of water in different parts of the country.”

While Smith and Stewart hope to make multiple trips together, this will be Williams’ and Easter’s final time finishing together at the high school level, a bittersweet moment for the duo after starting the bass club together.

“Corey and I actually met working the snack shack for football in 2019,” Easter said. “He was wearing a fishing shirt and that got my attention and we fished together the next weekend. We started the club soon after. Going to nationals in 2019 was a good learning experience for both of us. I think we’ve got more experience and knowledge since then. That will help us this year. We’ve also learned more about each other and how to pick each other up when we’re struggling. I’m glad I can be there with him during his senior year. There aren’t too many kids my age who really enjoy fishing like Corey and I do. I’m glad we’ve been able to fish together and bring more kids into the club.”

The national championships will be held June 30-July 3. While there is no entry fee to compete, the teams are responsible for their expenses and the club estimates it will cost around $16,000 to transport equipment, and pay for food and lodging for six anglers and three boat captains.

For additional information or to support the teams, email bouldercitybassclub@gmail.com.