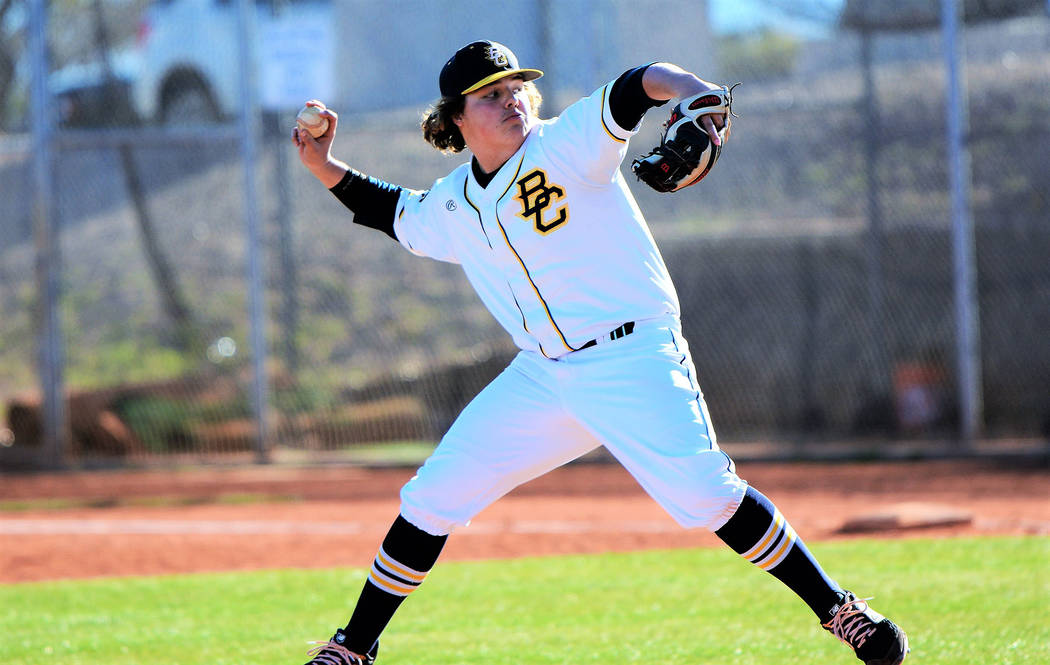 (Robert Vendettoli/Boulder City Review) Boulder City High School sophomore Blaze Trumble, seen making a relief appearance against Western on March 13, was named the 3A Southern Region player of the year. He batted .429 this season, leading the team in runs batted in (46), doubles (17) and home runs (7), while compiling a 2-1 record on the mound.

Blaze Trumble, a sophomore at Boulder City High School, was named the 3A Southern Region player of the year after turning into a key offensive threat for the baseball program this season.

“I’m very honored to win player of the year because there were so many other amazing players and I’m only a sophomore,” Trumble said. “This year at the plate I was super motivated by the fact that I was out almost all last year with a fractured hip and couldn’t play the game I love. Now, I’m motivated to push myself and do better than I did this year.”

“I thought it was a very well-deserved honor,” head coach Ed McCann said. “He has an amazing season for us offensively. He was a double machine and was a tough out against any pitcher. His game really improved this season and he was a nice surprise. I’m very happy for him.”

Part of a stacked sophomore lineup that help the Eagles (27-10) reach the 3A state tournament for the fifth consecutive season, Trumble batted .429 this season, leading the team in runs batted in (46), doubles (17) and home runs (7). Trumble also compiled a 2-1 record on the mound while making 16 appearances.

Sophomore Joey Giunta made the second team all-state as a key two-way contributor, batting .337 with 39 RBIs, five doubles and three triples while compiling a 6-2 record on the mound.

A two-way star as well, Connell posted a perfect 8-0 record on the mound.

Making second team all-region was senior Brendan Thorpe, who batted .346 with 35 runs batted in and 15 doubles, while compiling a 3-2 record on the mound.

“The thing I love about this team is we have guys that can play multiple roles,” McCann said. “We have a lot of guys who can both hit and pitch extremely well and that makes us dangerous.”