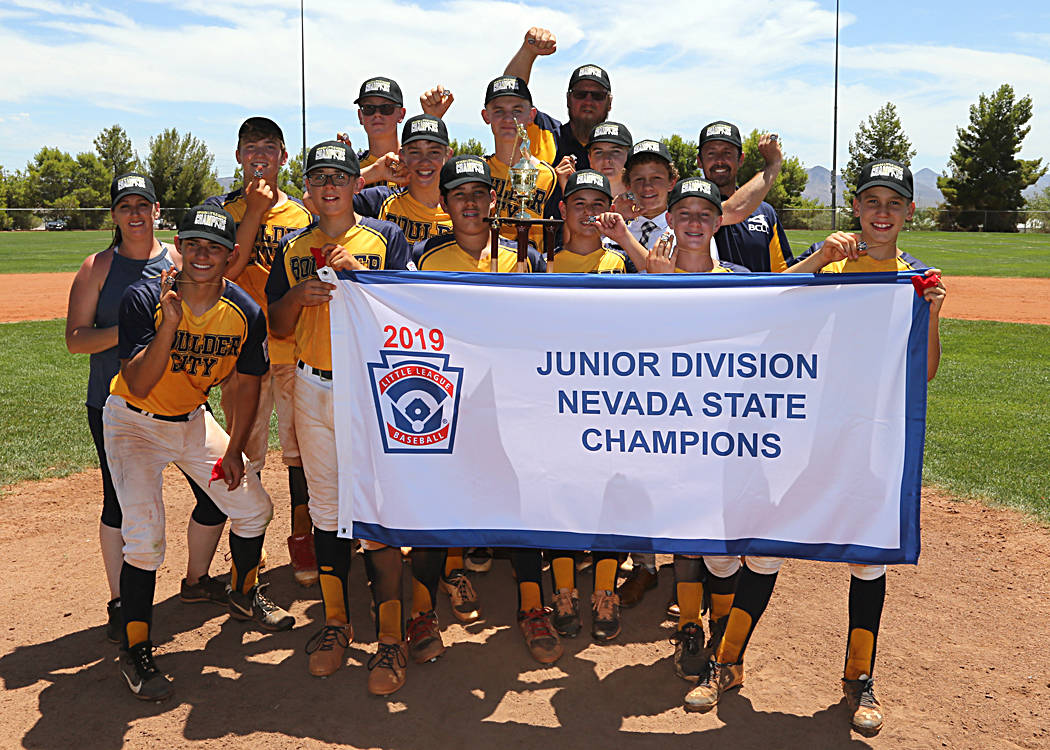 Representing District 2, Boulder City rallied with a pair of runs in the top of the seventh inning to knock off Mountain Ridge in a game that featured seven lead changes.

“It felt amazing for this group to go to the state tournament again, but to win it for Boulder City is an amazing feeling,” said player, Hunter Moore, who went 2 for 4 with an RBI. “We worked very hard to win the game, because we beat them pretty good earlier but they gave us a great game in the championship. It feels amazing to be champions.”

Boulder City scored the tying and go-ahead runs in the seventh, the latter coming on Jeremy Spencer’s sacrifice fly.

Boulder City ended the game with a quick three outs, with Dylan Spencer on the mound to claim the state title the team had been waiting a year to capture.

“I’m very proud of the kids and the way they played,” head coach Clint Spencer said. “The first two games finished with a (10-run) mercy rule, but they didn’t let it get to their heads. I reminded all of them that in baseball, on any given day, anything can happen. Our championship game showed that these boys have the fight — to be able to come back and earn redemption for last year. They wanted to show that this group might have lost once at state but they weren’t going to again.”

Simply dominant throughout the state tournament, Boulder City routed Mountain Ridge 10-0 earlier and High Desert 12-2 in the opening round.

Solberg also doubled in a pair of runs, while Jeremy Spencer finished 3 for 4 with an RBI.

With the state championship in hand, Boulder City will now make its way to regional play in San Jose, California. Bracket play has yet to be determined for Boulder City’s first game Friday, but coach Spencer is confident in his group, regardless of its opponent.

“We’re going to go out there and play the way we know how,” he said. “We’re very excited to represent the state of Nevada and I’m confident in the boys’ ability to get the job done.”

“This is our second trip to regionals in three years and that says something about this town and the support our players receive from the community. The league is growing due to the hard work and perseverance of the players, their families and an active board of directors. We hope this is just the start for Boulder City youth baseball,” said Katie Kilar president of the league board.