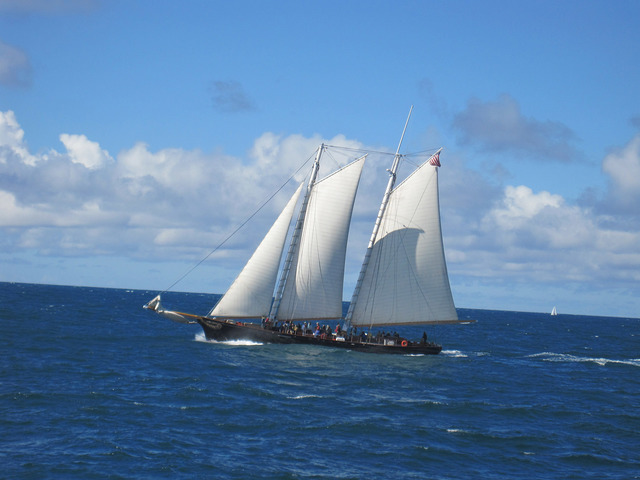 Photo courtesy Deborah Wall Whale-watching companies transport their passengers on a variety of vessels, from small catamarans to large motorboats, complete with inside seating and viewing decks. Some passengers combine a sailing experience while whale watching from the 139-foot yacht America, seen here, based in San Diego. 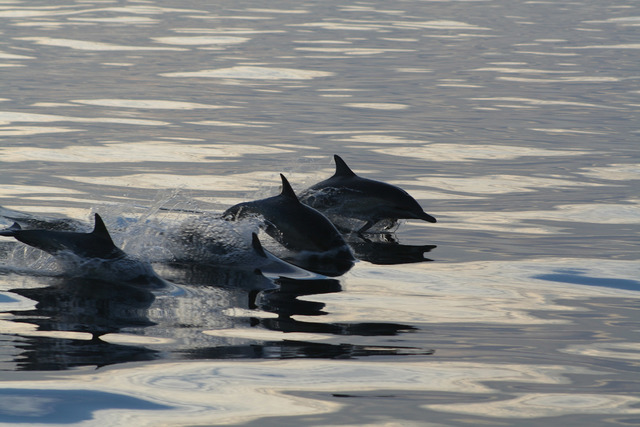 Photo courtesy Deborah Wall From now until March offers the year’s best chance to spot gray whales and dolphins off the Southern California coast. Dolphins can often be seen jumping and especially racing alongside a boat by bow riding the pressure waves created as the boat moves through the water. Pods of dolphins average about 200 but can number in thousands.

One of the most impressive displays nature affords is the sight of its very largest animals — whales. Las Vegans are well-situated to enjoy that experience because of our access to the Pacific Coast, and the next few months are the ideal time of year. From December to March, gray whales pass the California coast on their annual, 10,000-mile round trip — the longest migration of any mammal on earth.

Gray whales are extinct in the Atlantic Ocean, it is thought from too much hunting in the 17th and early 18th centuries. But because of international bans on hunting the gray, numbers in the Pacific have rebounded to about 25,000, and the species is no longer considered endangered there.

If you see one, you won’t mistake it for anything else. Adult grays average 43-49 feet in length and even their newborns are about 16 feet. Named for their predominant color, they are dark, slate-gray, but you’ll see white spots caused by barnacles and other critters that seek free rides on this bus-sized leviathan. Grays feed on small, bottom-dwelling marine animals.

Gray whales head south every fall from the Bering and Chukchi seas, between Alaska and Siberia, and migrate to the waters off Baja California, where they mate and calve. They are believed to navigate by following the coastline, some so closely that they are visible from shore.

On a commercial whale-watching expedition, with your guide specifically seeking them, your chances of seeing at least one are quite good. Fortunate passengers might even see other whales such as minke, humpback, finback or killer whales.

Even if you don’t see one of these big whales on your outing, if the weather is cooperating, you will certainly see dolphins. Most frequently seen is the common dolphin, which is about 7 feet long with a mix of black and gray on top and white on its underbelly. These dolphins love to “bow ride” along the bow of the boat, more or less surfing on the boat’s pressure wave. Their pods average about 200 but some number in the thousands. Other dolphins found here include the Pacific white-sided, bottlenose, Risso’s, and melon head.

The watching season is in full swing and you never know what you may see. Earlier this month in just one day, over two outings, a company from Dana Point reported seeing three humpback whales, two gray whales and 1,000 common dolphins. Also on a recent excursion out of Newport Beach, the tour sighted 10 orca (killer whales). Many of the companies report their sightings daily on their websites.

Whale-watching excursions leave from various ports and employ many different sizes and types of boats. Some last only a couple of hours while others can be a full day. Ones I can highly recommend from personal experience include Captain Dave’s Dana Point Whale Watching, Dana Point, 949-488-2828, www.dolphinsafari.com; Newport Landing Whale Watching, Newport Beach, 949-675-0551, www.newportwhales.com; Next Level Sailing, San Diego, 800-644-3454, www.nextlevelsailing.com; and Hornblower Cruises, San Diego, 888-467-6256, www.hornblower.com.