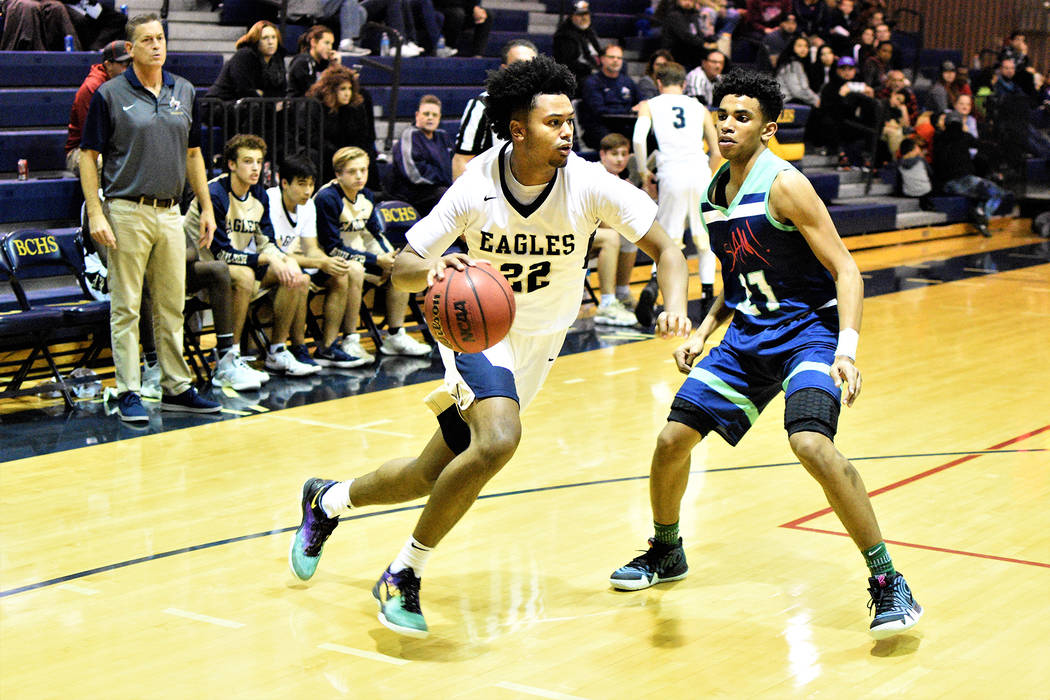 The win helped them rebound from their Friday, Dec. 7, loss to 4A opponent Foothill 86-60, leaving the team with a 7-1 record.

“It was really important to be able to get a solid win after our first loss,” senior Karson Bailey said. “That loss really showed us that we need to work hard and play together if we want to win games and we did that tonight.”

Playing fundamentally sound basketball Monday, the Eagles consistently worked the ball around against SLAM Academy, finding open shooters. Playing with intensity on both ends of the floor, the Eagles earned their fifth double-digit victory of the season.

“We played really well tonight,” Bailey said. “We worked as a team and we were very unselfish, which led to a lot of open looks. We also played a lot better defense and got a lot more rebounds, which helped us keep them to a low score.”

“Our guys did a nice job of getting him the ball in the right spots and he was catching and shooting,” head coach John Balistere said. “He found a nice rhythm and none of that is possible unless the other guys are looking for him and creating the opportunities for him.”

Setting up Thomas for easy shots consistently, Bailey dished out a game-high seven assists to go with 6 points.

Playing well at times despite their lopsided loss to the Falcons, Thomas led the Eagles with 20 points, while Morton and Speaker added 13 and 11 points, respectively.

Continuing their gauntlet of 4A opponents throughout the preseason, the Eagles will host 4A Liberty on Friday, Dec. 14, in another attempt to see where they stack up against the top teams in Nevada.

“I think it’s important to have these games on the schedule,” Balistere said. “If you want to be good, you have to play good teams. You have to figure out what your strengths and weakness are and how you’ll make adjustments. We want to play these games; it helps us for when we get into league and we have to play the top teams like Chaparral.”