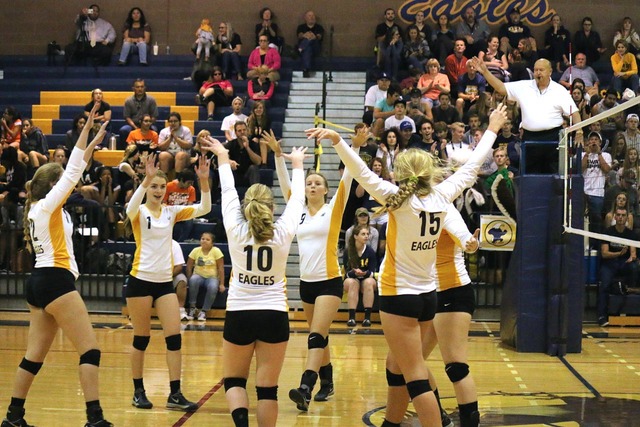 On senior night Oct. 26, the Lady Eagles dominated visiting Chaparral, 25-14, 25-14, 25-19 to finish the season in second place in the 3A Sunrise League. Laura Hubel/Boulder City Review 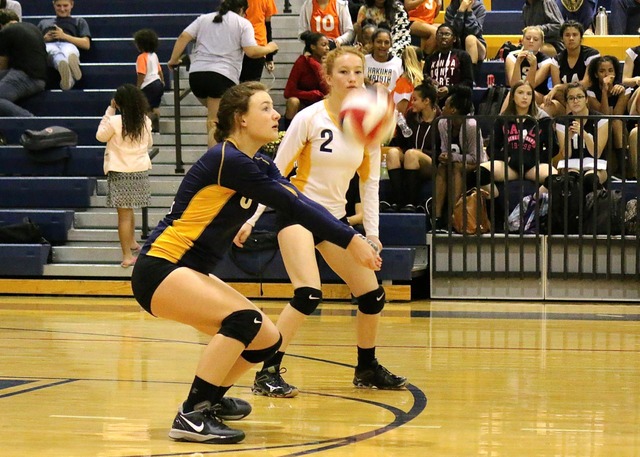 PAHRUMP — Swarming all over Cheyenne on Monday during the quarterfinals of the 3A Southern Region playoffs, the Boulder City girls volleyball squad seemed to have everything clicking during a rout of the Desert Shields, 25-14, 25-15 and 25-14.

“I thought we played a great game,” junior captain Maggie Roe said. “We all played very well and I’m glad we got through them.”

“When we serve well, everything else falls into place,” head coach Cherise Hinman said. “There were some good moments with that tonight. Our offense did really well when our passes were on.”

The Lady Eagles put together one of their best collective offensive performances of the season, backed by senior captain Alea Lehr and Roe, along with senior Kenadee Bailey and junior Jerra Hinson.

Lehr led the Lady Eagles with 36 assists, 10 digs and three serving aces, while Roe guided the scoring attack with 17 kills, 17 digs and seven aces. Getting into an offensive rhythm as well, Bailey added eight kills and 10 digs, while Hinson garnered five kills.

Stepping it up on defense as well, the Lady Eagles were all over the place against Cheyenne, churning out one of their better defensive performances of the season.

“We changed our defense a bit for the playoffs to help us cut out our blocking errors and pick up more balls in the deep court,” Hinman said. “Our captains did a good job making adjustments when needed.”

The team picked up four blocks on the night with just one error. Roe led the way with two, while Bailey and senior Aimee Finn each added one.

“Tonight was a good game for us, but it only gets harder from here,” Bailey said. “We need to be continuously stepping up our defensive game if we want to reach our postseason goals.”

Soaking in her last postseason trip, Lehr acknowledged that Monday’s performance was a great win for the program, but she added that this year’s team has goals of playing for a state championship.

“Monday was the first step in our quest for state, so it was a big game for momentum,” Lehr said. “The team came together for a great victory on the road in three solid games. We’re now looking forward to playing on our home court and seeking a trip to the regional finals.”

The Lady Eagles recap of their match against the Trojans will appear on Bouldercityreview.com.