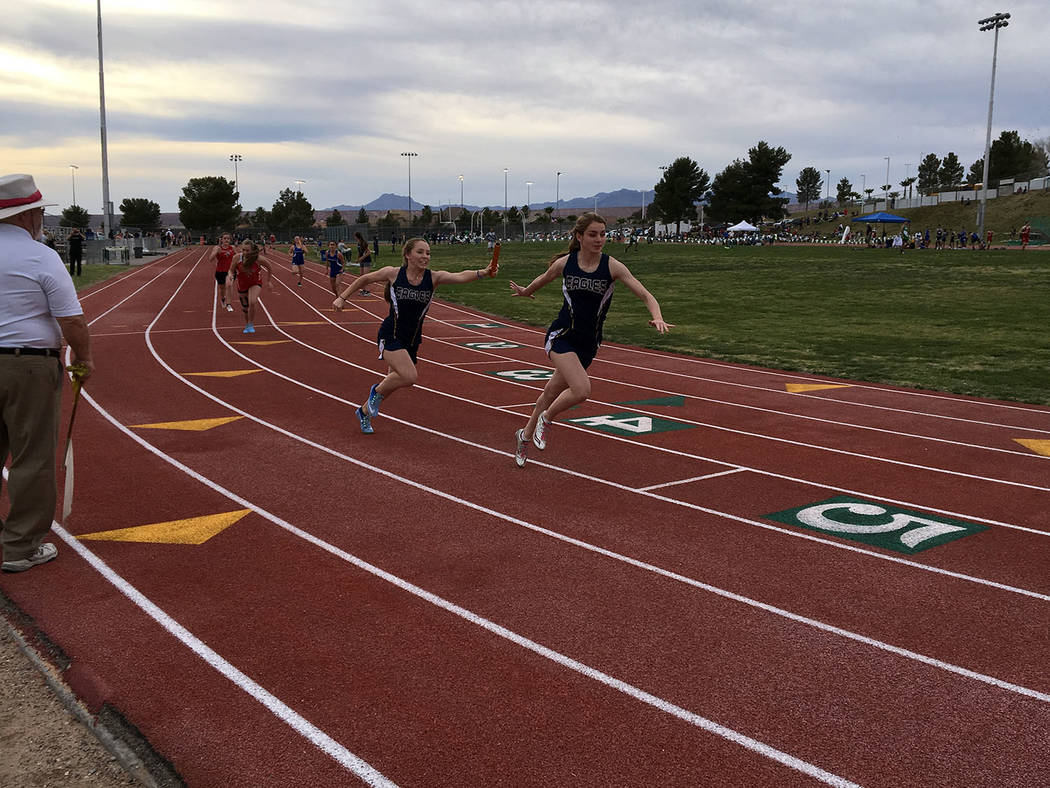 Courtesy Photo Junior Taylor Tenney hands off the baton to senior Kenadee Bailey in the 4x100 event during the Bulldog Early Invitational on Friday.

“I’m happy with our opening season results,” boys head coach Staci Selinger said. “We were short a few of our superstars going in, but everyone stepped up and volunteered to fill in when needed. It was a great starting point to see where everyone is at and build on from here.”

Providing the boys with great efforts, juniors Buddy Boggs and Zach Trone opened their season in style, placing at the top in each of their events.

Senior Chase Cowley concluded the boys’ efforts with a pair of fifth-place finishes in the shot put (34-11) and discus (94-4).

For the girls, senior captains Jordyn Trobiani and Kenadee Bailey led the way, placing within the top five in each of their events.

“It was a great first meet for us,” girls head coach Sara Fisher said. “We had some personal records, some first places and a bunch of medals. I couldn’t have asked for more.”

Juniors Sierra Selinger and Taylor Tenney also provided the Lady Eagles will solid performances, placing in the top five of their events as well.

The 4×100 relay team of Trobiani, Bailey, Tenney and sophomore Geri Wachtel placed second with a time of 55.42 seconds.

Wachtel concluded the girls’ individual efforts with a third-place finish in the long jump with a leap of 12-11, while placing sixth in the 100-meter hurdles (19.23 seconds) and seventh in the 300-meter hurdles (1:00.48). Seniors Sara Stepherson (9 feet) and Kate Stepherson (7-6) finished first and second in the pole vault competition.

Results from Tuesday’s Desert Pines meet were available by press time and will appear in next week’s issue.