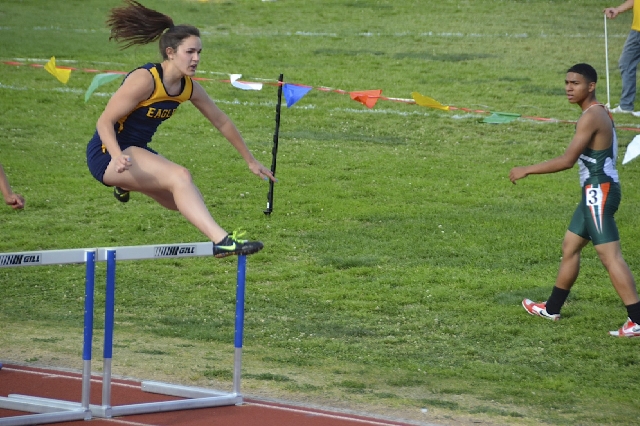 The boys and girls track teams prepare for the postseason with good performances at the Grant Bushman Invitational Friday at Moapa Valley High School in Overton.

The 1A Southern Region championship meets for both boys and girls is tomorrow and Saturday at Sunrise Mountain High in Las Vegas. The top four finishers in each event advance to the state meet, which is May 17-18 at Silverado High in Henderson.

Boulder City’s teams have done well during the season, but the competition in the new league has not been easy.

The NIAA realigned this past fall with old 3A Southern League rivals Boulder City, Moapa Valley and Virgin Valley joining the new Division 1-A and forming the Sunrise League along with former 4A schools Sunrise Mountain, Chaparral, Desert Pines and Southwest Career Technical Academy.

The Southern Region meet will include formidable opponents such as Faith Lutheran, Clark and Cheyenne.

“It’s been an adjustment to the new league and the girls have done great,” said Lady Eagles coach Steve Roe. “The girls set a new 4×800 meter relay school record last week and we expect to do it again this weekend.”

Both teams won the three-team Southern Region title last year, with the girls winning 10 of 18 events. This year is expected to be different with 13 teams competing.

“We will have to set school records or come close in many events just to qualify for state or even place at state. The competition definitely has gotten better.”

“It’s been a struggle with all the new teams in the league, but we have done really well much of the season,” said Jeppsen, who was third in the 800 meters (2:39.03). “We have high hopes to do well at the regional and advance as many as possible to the state meet. It won’t be easy, but we will do well.”

The Lady Eagles — Emma Jeppsen, Jessica Tobler, Savannah Morris and Jana Williams — won the 4×800 meter relay while setting a school record in the event with a time of 10 minutes, 25.02 seconds.

Alexis Fenyves won the triple jump with a leap of 31-10. Emilia Oscilowicz was second in the discus with a throw of 94-11, while teammate Sariah Gneiting was second (88-3).

The boys also face a tough road in the Southern Region against rival Faith Lutheran. The Eagles are rounded, with Harkins leading them in the distance events; Jacorey Dixon, Chris Carnes and Xavier Steel in the sprints, and Christian Nilsen and Tanner Imlay in the field events.

“We think we have some solid athletes that can carry this team far,” boys’ coach Josh Fisher said. “Chandler continues to dominate in the distance and we hope to pick up team points from several others.”

Harkins said he expects the Eagles to rally.

“As a team, we have performed well all season in the new league,” Harkins said. “I am looking forward to the regional meet because I believe many of us will excel in our individual events and help the team as well.”

Senior Nilsen won the discus (134-7) while teammate Jack Rozycki was second (117-8). Nilsen also was second in the shot put and Imlay was third in the triple jump (40-5).

The boys and girls swim teams swept through the regular season, dominating even the biggest schools with top swim programs like Palo Verde and Green Valley.

The boys won the past two state championships before the realignment. The Lady Eagles finished state runner-up last year.

The teams are coached by Sara Carroll, who is in her 19th season. The girls are led by senior Megan Purdy, juniors Cori Molisee, Natalie and Rachael Grothe, sophomores Alex Hubel and Jessica Purdy, and freshman Becca Lelles.

Hubel won the 50-yard and 100-freestyle state titles last year, and was part of the 400 freestyle relay championship team.

The 1A Southern Region meet finals are Saturday at UNLV, with the state meet in Carson City on May 18.

The boys will be seeking its sixth state team title, and the girls their first team title.