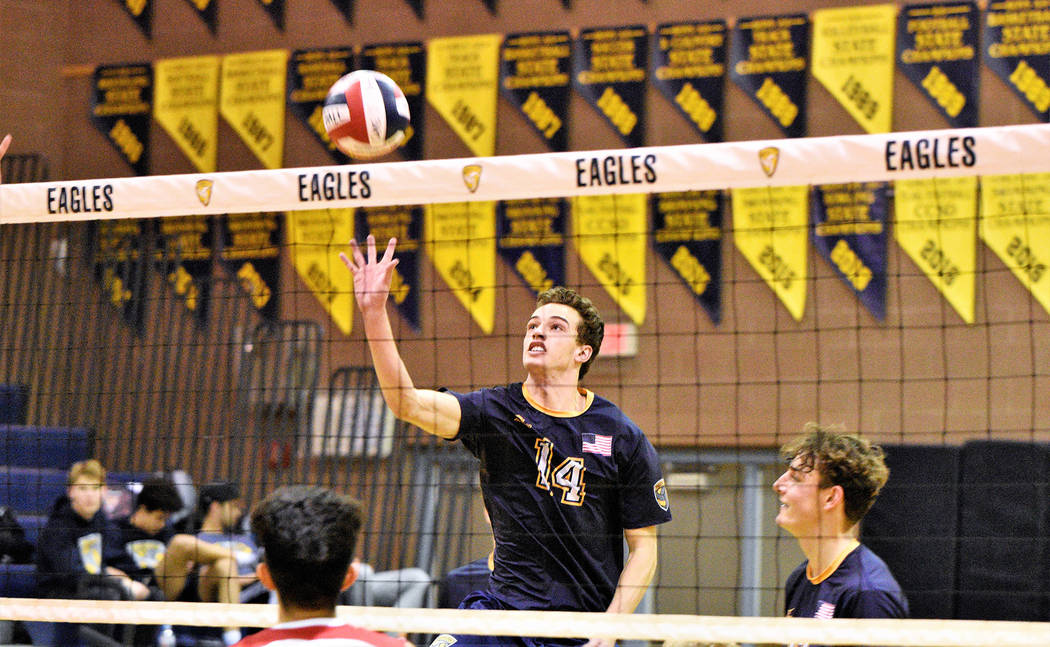 (Robert Vendettoli/Boulder City Review) Boulder City High School senior Karson Bailey, seen rising up for a kill against Del Sol on March 25, 2019, was named to the all-tournament team after helping the Eagles win the 4A Skyhawk Invitational at Silverado High School on Saturday, March 30, 2019.

After Boulder City High School’s boys volleyball head coach said her team was close to being great, the boys made a statement, winning the 4A Skyhawk Invitational at Silverado High School on Saturday, March 30.

“As the tournament progressed, they just got better and better,” head coach Rachelle Huxford said. “I feel like this was a real turning point for them. They gelled as a team and played very cohesively. It was fantastic to watch this all happen.”

Battling back and forth with the Skyhawks, which defeated the Eagles in game one of the tournament, freshman Kannon Rose made 16 digs defensively, while dishing out 18 assists.

“The biggest thing the boys learned on Saturday was how to keep momentum,” Huxford said. “In past matches we had been really great about getting a lead, but then we would lose momentum toward the end. I felt like for the first time this weekend we were able to keep momentum on our side even when we had some errors.”

Finishing 5-1 at the Skyhawk Invitational, the Eagles picked up victories over 4A opponents Rancho 2-0, Durango 2-1 and Sierra Vista 2-1, while also defeating 3A Western 2-0.

Bailey and Jorgensen were each named to the all-tournament team for their efforts.

Currently ranked fourth in the 3A Sunrise with a 3-3 league record, the Eagles fell to the league’s top three teams, Mojave (6-0), Somerset Academy Sky Pointe (5-1) and Del Sol (5-1), to start league play, but Huxford thinks this group is starting to find its groove and is excited for upcoming rematches.

“It was really tough starting off league play with the three toughest teams in our division, but it definitely helped us,” she said. “I think we’re seeing a different team, an improved one. I’m confident that when we play those teams again, we’ll put in the effort we played with on Saturday. I believe we can compete.”