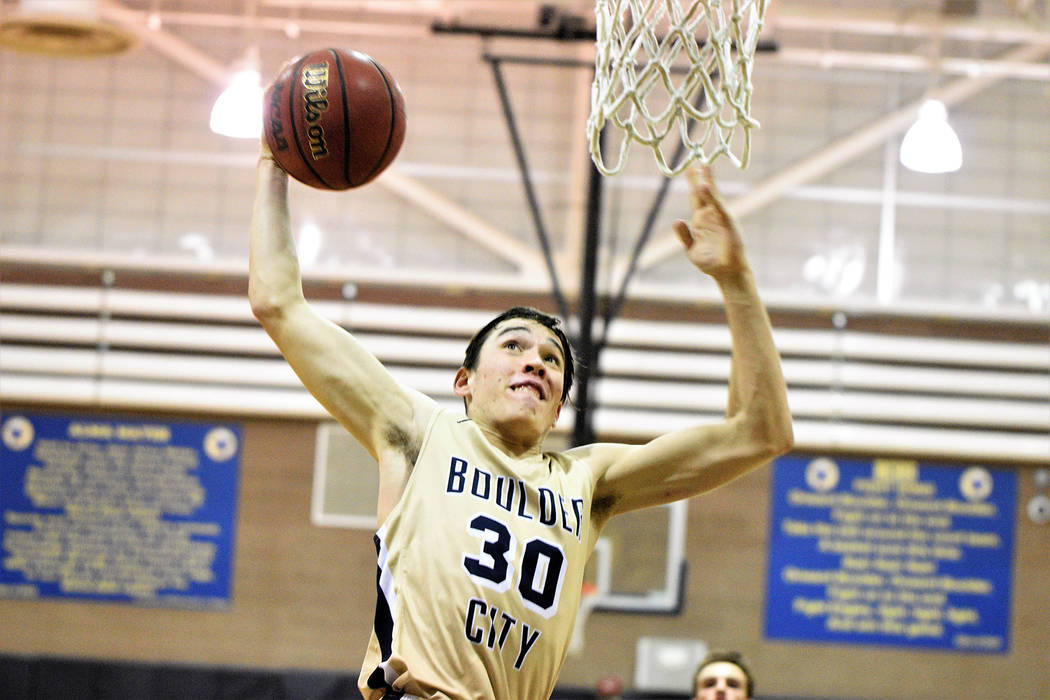 Throwing down a thunderous slam dunk to end the third quarter, Ethan Speaker, a sophomore on Boulder City High School’s boys basketball team, got the ball stuck in the net.

That was the only thing that went wrong Monday, Feb. 4, night in the Eagles’ 81-50 victory over Somerset Academy Sky Pointe.

Speaker, who scored a game-high 22 points, was key in the Eagles’ 29-7 third-quarter run that broke the game open for BCHS after a subpar first half.

“We did a much better job of settling in during the second half,” head coach John Balistere said. “Our guys played better defense and, obviously, defense turns into offensive opportunities and they took advantage of that. It was a good team effort all around.”

Sharing the ball evenly, the Eagles were on fire offensively, with four players finishing in double-figure scoring.

Running the paint with authority and dishing out for open 3-pointers, sophomore Matt Morton had a breakout game with a 21-point effort as the Eagles’ youth continues to shine.

“Ethan and Matt are talented,” Balistere said. “They’re young and sometimes they make mistakes but they’re learning to play through them. They’re learning how to do some great things for us on both ends of the floor. It’s my job to challenge them every day and try to get the best out of them. They’re really fun to coach.”

“Sweeping Virgin Valley was an amazing feeling,” Bailey said. “Even though we didn’t play our best game, especially in the first half, our team came together and played great in the second half to get us a big lead.”

Ahead just 28-25 at half time, the Eagles outscored the Bulldogs 35-18 in the second half to run away with the victory.

Thomas led all scorers with 25 points, while Bailey added 13. Speaker finished with 11 points and Morton had 10.

Looking to close the season strong, the Eagles will face Sunrise Mountain on Tuesday for Senior Night.