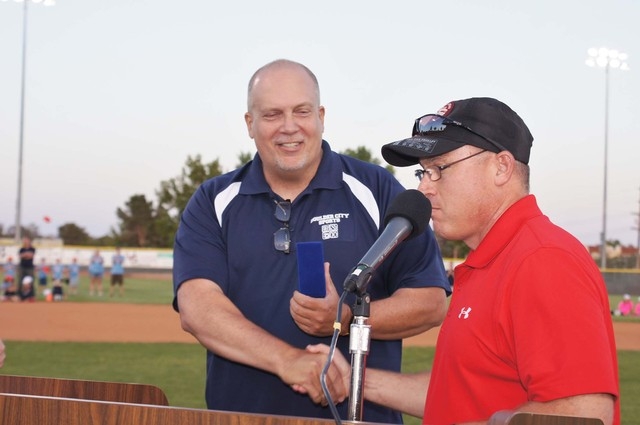 Tay Deering was presented with a key to the city by Mayor Roger Tobler Monday at opening ceremonies for Boulder City’s baseball league.

Deering has been recreation sports coordinator for Boulder City for the past 29 years. He plans to retire in September.

Deering came to Boulder City in 1985 after graduating with a master’s in recreation management from BYU. He was looking through a newsletter after he graduated and noticed Boulder City had an opening for a recreation coordinator. He applied and has called Boulder City home ever since.

“When I first got here, people wouldn’t stop telling me how great of a place Boulder City was,” he said. “I’ve never heard enough superlatives to describe the people here.”

Deering said he has always loved sports, and earned a scholarship to play volleyball at BYU-Hawaii.

Parks and Recreation Director Roger Hall hired Deering, and credited him with raising $168,000 in scholarship funds during his tenure.

“I don’t ever have to worry about sports with him here,” Hall said. “I don’t have to check up on him because I know he’s done his job right.”

Deering said part of what makes his job fun is watching others enjoy the games.

“The most rewarding part is seeing people have fun,” he said. “There are nights when I’m out, and I stop and look around and just see everyone having a good time.”

Deering recalled a time in 2008 when his department was facing financial difficulties. He said his co-workers became donors to help keep the department going, and he never forgot their sacrifices.

“I did a lot more of noticing and appreciating people after that,” he said. “My co-workers have helped me out a lot.”

“I see the value in recreational sports, and it just seemed like a good fit for me,” he said.

Deering was overwhelmed when the mayor presented him with a key to the city and declared May 12 “Tay Deering Day.”

“It was so gracious of them to do something like that,” he said. “Besides my family and faith, just being part of recreational sports has been the best feeling I’ve ever had.”