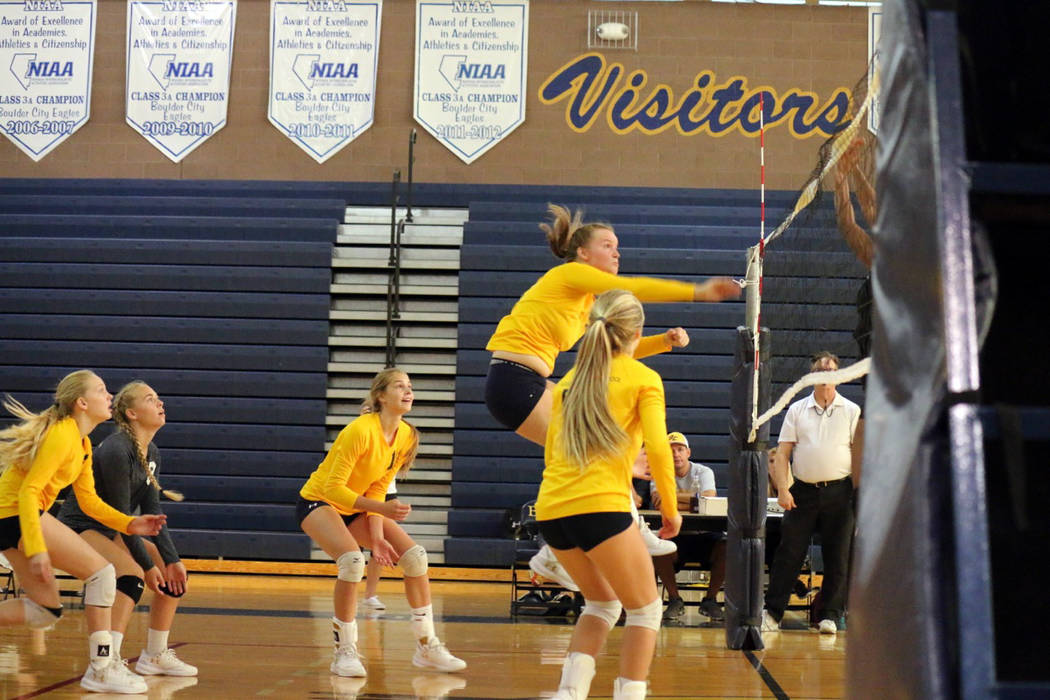 Laura Hubel/Boulder City Review At the net, Boulder City High School senior No. 9 Jerra Hinson goes in for the kill shot against Chaparral in game two of their match on Sept. 6. The Lady Eagles won 25-11, 25-9 and 25-6.

Defeating the Cowboys 25-11, 25-9, 25-6, the Lady Eagles, behind the offensive threat of senior Maggie Roe and defense of senior Jerra Hinson, were dominant from the get go. Always looking for perfection however, head coach Cherise Hinman said she’d still like to see a better effort from the girls.

“We were really sloppy at times against Chaparral,” Hinman said. “Scoreboard says we dominated and we did, but that’s because these girls are so talented. We’re working in a few freshmen this year so obviously we’re not always gonna be perfect at times. I’d really like us to be though after the regular season.”

“The only way we’re going to learn to get better is to suffer a loss like this to Basic,” Hinman said. “We let them outplay us. Too many mental errors, too many mistakes. It’s unfortunate to get swept by a team you should beat. I’m hopeful the girls will move forward from this game.”

Prepping for their fifth annual Boulder City Invitational, the Lady Eagles will host a handful of 4A programs this weekend, hoping for one final test before the heart of their league schedule begins.

“I’ve always said the only way you’re going to get better is to play better competition,” Hinman said. “We have a lot of good teams coming here this weekend; I’m hopeful we’ll be up for the challenge. We’ll see how we stack up after this weekend.”

Sweeping the Bulldogs 18-0, the boys have given up one point throughout five league matches, looking like a serious state tournament contender in the process.

“We have been working really hard preparing for the postseason,” boys coach Rachelle Huxford said. “The boys are excited for a second shot at the title. I know they have what it takes, we just have to keep our focus and finish out the season one match at a time.”

Almost as dominant as the boys, the Lady Eagles routed the Bulldogs 16-2 behind strong play from their revamped singles lineup.

Moving her top two singles players to doubles for the day, the sophomore pairing of Olivia Mikkelson and Tegan Pappas finished 2-0, along with the duo of junior Heather Patterson and sophomore Katelyn Fox.

“A lot of our girls stepped up today,” girls coach Jami Pappas said. “I’m starting to learning which pairing work best and where to put our girls for the best results.”

Hoping for more league success, the Eagles will travel to Southeast Career Technical Academy today, followed by a home match with Moapa Valley on Friday and Del Sol on Monday.

Tying with Somerset-Sky Pointe on Tuesday 1-1, the Eagles rebounded nicely from a 4-1 loss to Basic earlier in the week.

Looking for every point they can get in league play to end a postseason drought that dates back to 2012, senior Alex Krausman tied the game for the Eagles in the second half on an unassisted goal.

Unable to stop the 4A Wolves on Sept. 7, the Eagles stopped the shutout in the second half with an unassisted goal by senior Caden Mendiola.

Hosting Virgin Valley at 3 p.m. today, the Eagles have a busy slate this week with four games. The Eagles will host Pahrump Valley at 10 a.m. Saturday, followed by a road game at Southeast Career Technical Academy on Monday and a home against Moapa Valley on Tuesday.

Exploding for a 9-3 offensive showcase against Somerset-Sky Pointe on Tuesday, the Lady Eagles advanced to 2-0 to start league play.

Looking much improved offensively this season, the girls finished the first half 4-0.

Rebounding from Friday’s 2-0 nonleague loss to Pahrump Valley, the Lady Eagles figure to be contenders for a postseason berth in the 3A Sunrise after their hot league start.

Heading into the heart of their league schedule, the Lady Eagles will travel to Virgin Valley for a game at 3 p.m. today, followed by a home game against Southeast Career Technical Academy on Monday and a road game against Moapa Valley on Tuesday.

Finishing with a team score of 59, the Lady Eagles edged out Desert Oasis (65) and Silverado (109) behind a fifth-place finish from senior Sierra Selinger, who led the way with an overall time of 20:12.

“I think the girls are running really well,” head coach Staci Selinger said. “I liked how close Audrey and Camille finished together and Sierra had a great race out in the front pack.”

On Saturday at the 48th annual Larry Burgess-Las Vegas Invitational at Sunset Park, Audrey Selinger finished seventh in the small-school race with a time of 20:39, while Torgesen finished 23rd with a time of 22:44.

While the girls are clicking on all cylinders to start the season, the boys are still trying to find their footing but are making strides.

Finishing fifth with an overall team score of 130, freshman Ethan Porter led the Eagles with an 18th-place finish, finishing with a time of 18:11, while junior Elias Woodbury finished 21st with a time of 18:24.

Junior Justice Tillman finished 51st with a time of 19:59.

“Ethan and Elias raced well Tuesday with Justice closing right behind them” Staci Selinger said. “I like how they are grouping up and pacing together. They are running faster each race and we’ll get those groups moved further up in the pack. I’m happy with the progress they’re making.”