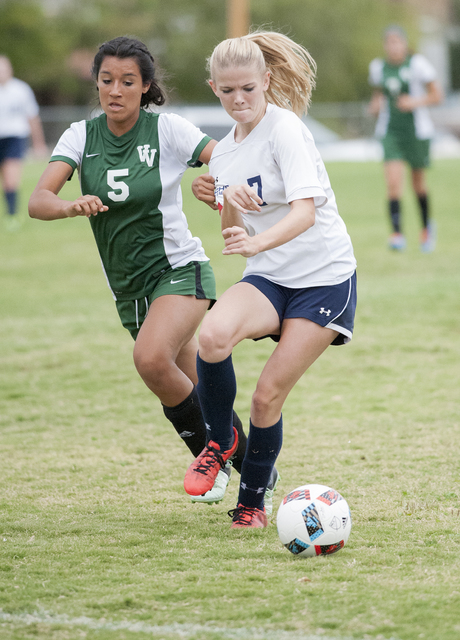 Earning second-team 3A Southern Region honors, senior defender Alexus Pohe was nominated for her stellar play on the Lady Eagles’ defense that forced a pair of shutouts on the season. As solid passer as well, Pohe also garnered three assists on the year.

Teaming with Pohe, Davidson formed one of the league’s top defensive units, with Trobiani (nine goals and one assist) and Oeland (two goals and two assists) teamed with Manns to provide the Lady Eagles with offensive firepower.

“I am honored to be recognized once again this year and excited to be in such good company,” Selinger said. “The (Las Vegas) Review-Journal puts on an amazing recognition dinner for us athletes. I was happy to end the season better than expected and am excited for the track season.”

Battling through injuries throughout the season, Selinger highlighted her season at the 3A Southern Region meet, placing first with a personal record of 19:50.6.

On a 3-mile course at the Larry Burgess-Las Vegas Invitational at Sunset Park, Selinger placed fourth with a time of 20:33.5.

Opening up the Paloma Valley Winter Shootout in Menifee, California, on Tuesday against California’s Citrus Hill, the Eagles fell 73-37, dropping to 4-7 on the season.

Giving up 45 points in the first half, the Eagles showed improvements in the second with the defensive adjustments allowing only 28 points.

Continuing play in the tournament, the Eagles will play Paloma Valley today, followed by an unknown opponent Friday.

Hanging tough with Fernley in their opener 33-23, the Lady Eagles had their hands full against Dimond, falling 72-22.

The Lady Eagles will wrap up tournament play today against an unknown opponent.