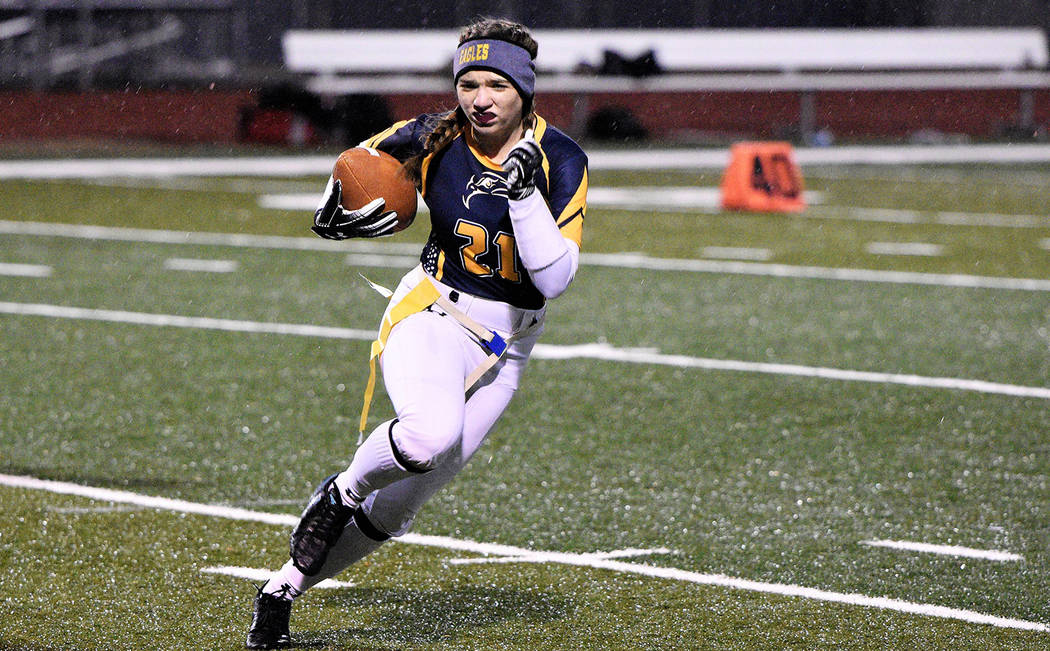 (Robert Vendettoli/Boulder City Review) Boulder City High School junior Jasmyn Curl had a breakout performance in the Lady Eagles' Jan. 14, 2019, win against Chaparral. She rushed for 88 yards and scored a touchdown in the 25-12 win.

On the verge of a three-game losing streak after losses to Del Sol and Virgin Valley on Jan. 9 and 11, respectively, the Lady Eagles trailed 12-6 at halftime before a 19-point fourth-quarter outburst.

“We had a tough week, last week, losing by two points to Del Sol and not giving up an offensive touchdown to Virgin Valley and still losing,” head coach Kevin Ruth said. “It was good to get back on track and Chaparral has improved a bunch this year. We start our second round of conference games on Wednesday and need to keep the momentum going.”

Turning the momentum of their season around in a hurry in the second half against the Cowboys, the Lady Eagles played with a sense of urgency after a lackluster first half.

“We have a great group of girls that don’t hit the panic button too often,” Ruth said. “It was great to see them stick together, with the weather and the score not helping us.”

Junior Jasmyn Curl had a breakout performance with a rushing touchdown and 88 yards to fuel the comeback effort.

“Everyone had a chip on their shoulder from last week,” Reese said. “When they scored those two touchdowns in the first half, a fire started under us and we came out ready to win.”

Nearly defeating Del Sol, the Lady Eagles were neck and neck with the Dragons, missing on a pair of extra points to fall 14-12.

Perkins connected on 19 of 33 passing for 169 yards and a touchdown, connecting with senior Haley Jackson through the air. Reese added a rushing score and 22 yards on the ground, while catching six passes for 51 yards.

Feeling confident despite the rout, Reese said the Lady Eagles will be better prepared next time around.

“We figured out what they had and what we need to do in order to win and that is mainly just staying on track,” she said. “We need to run our routes right and block. I know we can beat them and I know our team is ready to play them again.”

Falling to third place in the 3A classification, the Lady Eagles remain focused. They have two games on the schedule in the coming days, at Mojave on Friday and at home against Valley on Wednesday.

“It’s really important to stay focused because we still have to play every team again and we know that they all want to beat Boulder City,” Reese said. “Having those losses also helps us not get cocky and will help us come out ready to win.”