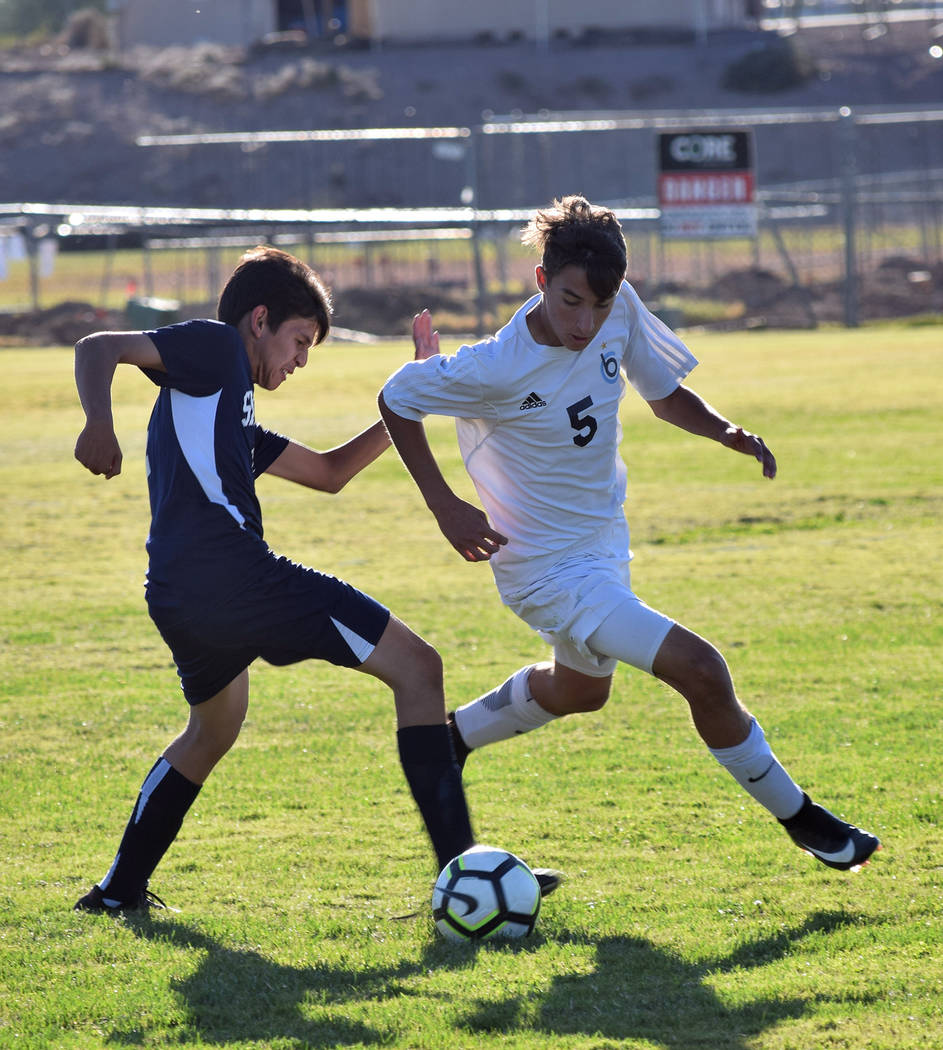 Robert Vendettoli/Boulder City Review Julian Balmer, right, a freshman at Boulder City High School, was named to the All-Sunrise Conference second team for his performance with the Eagles soccer team this season. He led the team with 10 goals and three assists.

“An accomplishment like this is very rewarding for me, especially having achieved it for the first time so early on in my career,” Balmer said. “This achievement excites and encourages me to work even harder to improve so we can do even better next year.”

Helping the Eagles improve with an extra two wins (5-10-2) this season, Balmer was the team’s key catalyst on offense with a team-leading 10 goals and three assists.

“Julian is an aggressive player with the speed to complement his playing style,” boys head coach Chad Smith said. “Julian is a very flexible player, with the ability to play defense at a high level, as well. I look forward to Julian having an outstanding season next year, where he will be able to work even more effectively with the upperclassman.”

Leading the girls in goals this season, Manns proved to be an all-around threat for the Lady Eagles, scoring nine goals, while dishing out five assists.

As a freshman, Manns was a first-team All-Southern Region selection after leading the team with eight goals and three assists, making her one of the state’s top underclassman.

“It’s going to be really tough to replace the production Abigail (Harling) and Alexis (Cable) gave us last season, but we expect to stay competitive,” girls head coach Garth Schulz said. “We have two varsity returners and two junior varsity returners leading the way this season, so hopefully experience will be on our side.”

Senior Bailey Bennett-Jordan and sophomore Christine Smith are expected to lead the way for the Lady Eagles after both bowling 459 in last season’s final.

Junior varsity returners, senior Camille Torgesen and junior Samantha Wagner, are expected to round out the team’s starting rotation.

“Sam wasn’t a part of the championship teams we’ve built in the past, but he was around that atmosphere and knows what to expect,” boys coach Rodney Ball said. “I’m hopeful that experience will help him lead this season.”