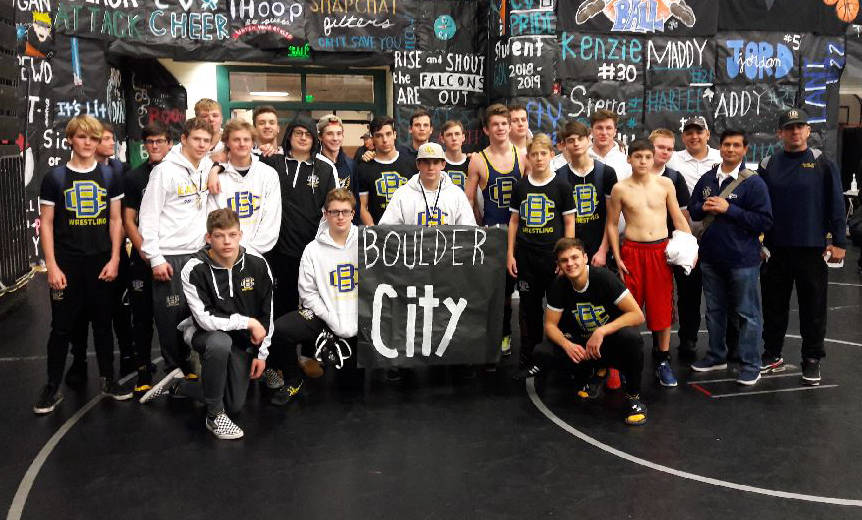 (Kim Cox) The Boulder City High School wrestling team won the silver bracket at the Iron Town Duals in Cedar City, Utah, on Saturday, Jan. 12, 2019, finishing with a record of 6-2.

Also winning a pair of matches against 4A opponents, the Eagles defeated Shadow Ridge 43-36 and Basic 59-18 on Jan. 9.

“We’re always looking to wrestle against the best teams and prepare these guys,” head coach Jim Cox said. “We’re not gonna get any better if we’re comfortable. We’re always trying to push our guys.”

Picking up victories against both 4A programs were senior Ryan Vanario, Dunagan, Moore and Ladd Cox.

Against Shadow Ridge Krumm and Brown picked up victories, while Cowley got a win against Basic.

Setting their focus toward another large tournament, the Eagles will compete in the Chaparral Invitational this weekend, followed by a road meet at Virgin Valley on Tuesday, Jan. 22, and senior night against Chaparral on Wednesday, Jan. 23.

Falling to rival Virgin Valley 45-40 on Tuesday, Jan. 15, the Lady Eagles fought back from a 16-9 first-quarter deficit but were never able to pull even with the Bulldogs.

Getting the better of Pahrump Valley on Friday, Jan. 11, the Lady Eagles held off the Trojans for a 31-29 victory.

Despite being outscored 11-6 in the fourth quarter, the Lady Eagles held on behind a 16-point effort from senior guard Hannah Estes.

Playing at home for the first time in a month, the Lady Eagles will host Sky Pointe tonight, Jan. 17, followed by a road game at Chaparral on Wednesday, Jan. 23.

Boulder City High School boys bowling team locked up the No. 1 seed for the playoffs, defeating Sunrise Mountain and The Meadows on Jan. 9 and Monday, Jan. 14, to close out the regular season strong.

Unable to match the same success, the Lady Eagles fell in both matches.