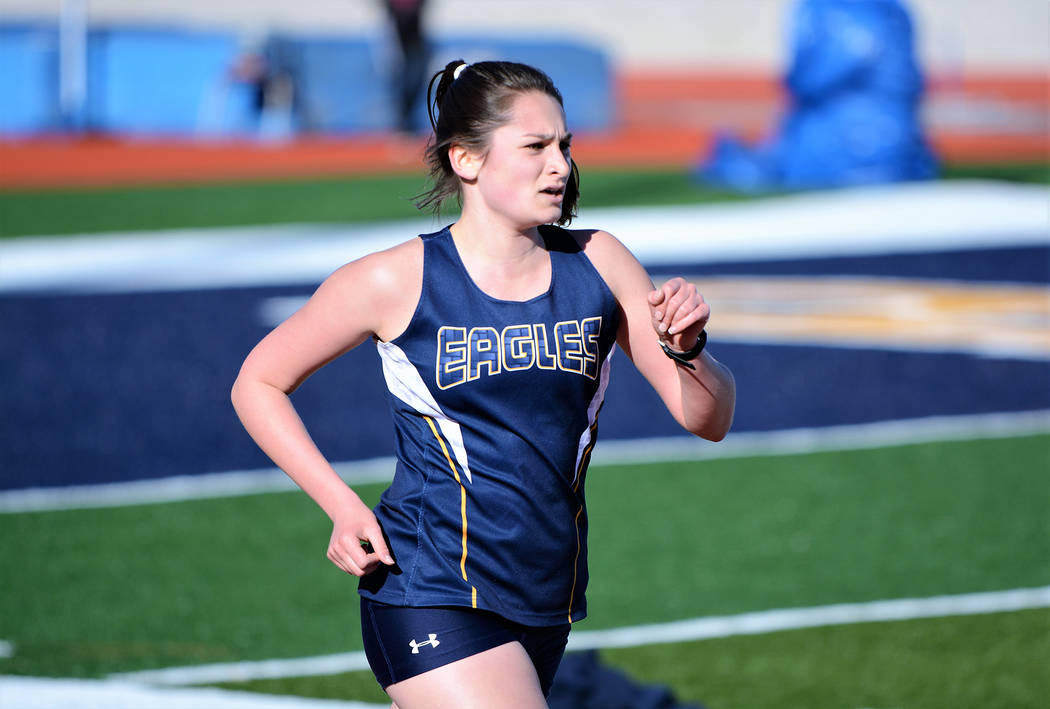 Placing first in all eight individual events, the Eagles routed the Miners 192-13 behind senior A.J. Pouch and sophomores Joe Purdy and Seth Woodbury, who each won a pair of events.

Senior Elias Woodbury and sophomore Cyrus Peterson rounded out the effort with first-place finishes in the 50-yard freestyle and 100-yard backstroke, respectively.

Swimming again at Heritage Park on Saturday, the Eagles will take on Valley and White Pine.

The Lady Eagles raced past their competition, finishing with a team score of 91, while Somerset Academy-Losee finished second with 48 points.

Helping the boys escape Western (60), Boulder City finished with a team score of 62, behind four top-three finishes from sophomore Sonny Peck. Holding a pair of first-place finishes, Peck won the 110-meter hurdles (19.1) and pole vault (8-0) events, while placing third in the long jump (17-0.5) and triple jump (35-5).

Results from Tuesday’s, March 19, meet against Sunrise Mountain were unavailable.

The Eagles continue their season Friday, March 22, at Coronado in the Silver State Invitational.

Defeating Sky Pointe (453) with a team score of 381 at Paiute, junior Jason Krumm finished second with a score of 95, while senior Kevin Phelps finished third with a 97.

Staying with league play, the Eagles have a match at Las Vegas National on Monday, March 25, followed by a nonleague contest against 4A Green Valley at Legacy Golf Club on Tuesday, March 26.

Boulder City High School’s boys volleyball team split a pair of games this week, defeating 4A Tech on March 13 while falling to 3A Sky Pointe on Tuesday, March 19.

Getting into the heart of their league schedule, Boulder City will host Mojave tonight, March 21, and Del Sol on Monday, March 25, followed by a road contest at Sunrise Mountain on Wednesday, March 27.