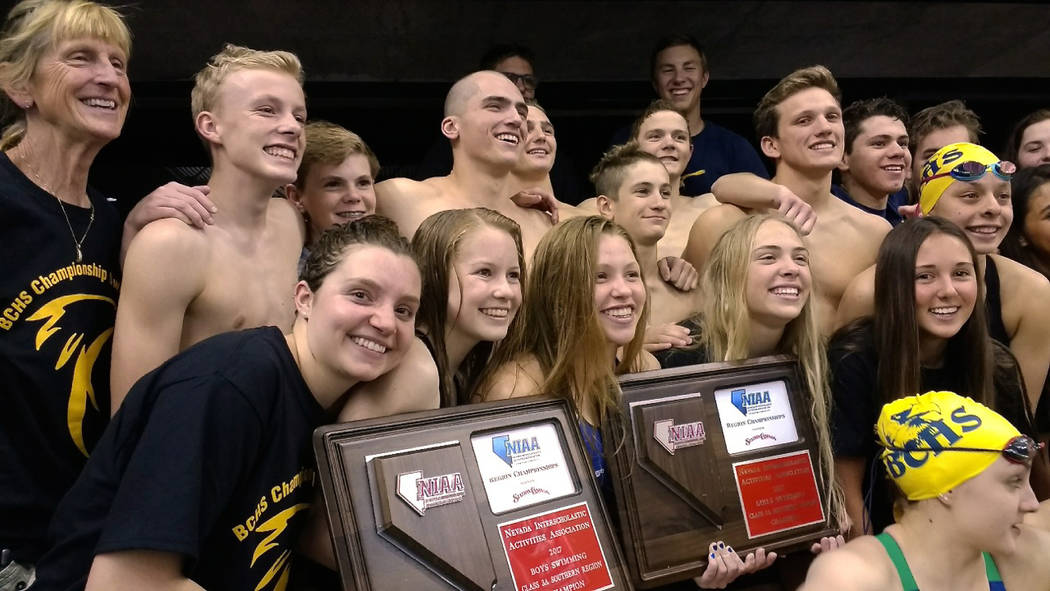 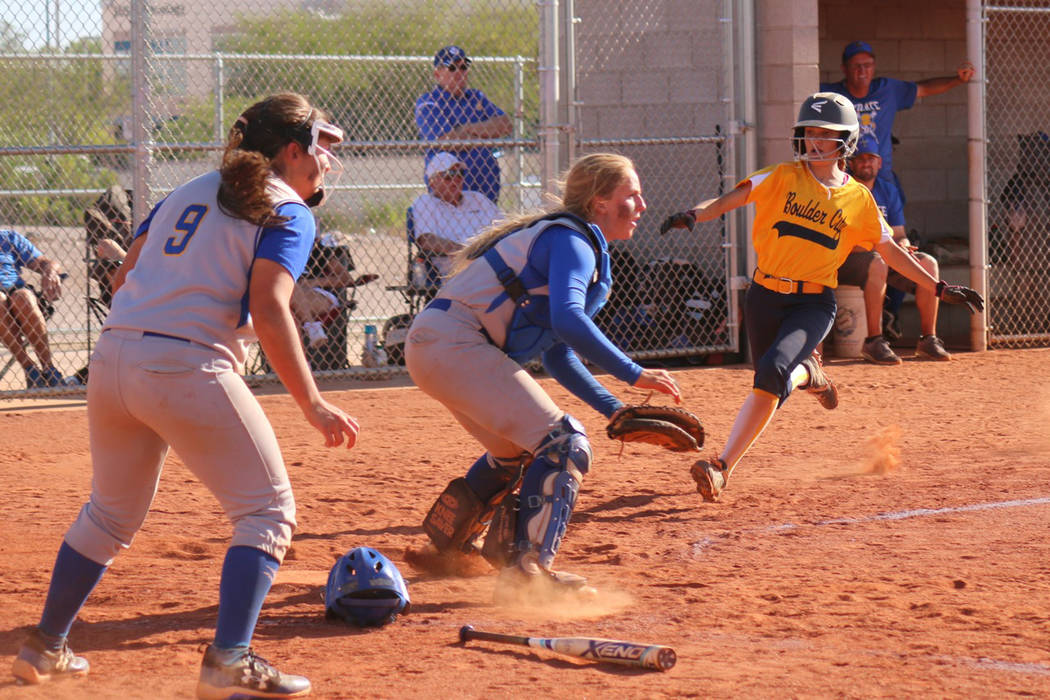 Laura Hubel/Boulder City Review Just beating the throw, pinch runner Keeley Alexander, who was brought up from the junior varsity team for the regional tournament, scores for the Lady Eagles in the bottom of the third inning against Moapa Valley on Friday at Southeast Career Technical Academy. The girls lost 5-4.

Dominating their way to victory, both Boulder City High School swim programs were unbeatable on Friday at the 3A Southern Regional meet at UNLV.

“Regionals was such an exciting time individually for some of us and as a team,” senior Montana Lloyd said. “Everyone was swimming out of their minds and so fast, I think faster than we all expected and it was such an exciting thing to watch everyone drop times and watch a bunch of our team make state.”

Among leaders for the Lady Eagles, Lloyd and senior Mandy Gebhart won a pair of events.

Dominating the 500-yard freestyle, Gebhart won with an overall time of 4:56.43 while Boulder City junior Annika Freiburger had the next fastest time at 5:23.47. Gebhart finished with a time of 1:50.16 in the 200-yard freestyle.

Just as dominant, the boys had an overall team score of 449 points, led by senior Braden Klouse and sophomores AJ Pouch and Paco Cuevas.

“Our team raced well and had their mind on a goal,” AJ Pouch said. “Since the start of the season our goal has been to make it to state and try to win another title. We raced with everything we had and now its time to progress and win another championship.”

Gebhart and AJ Pouch were named swimmers of the meet, receiving the most points and setting new records. In addition to winning her two events, Gebhart was on two winning relay teams and set a regional record in the 500-yard freestyle (4:56.43). She earned all-American consideration in the 200- and 500-yard freestyles.

Lloyd also earned all-American consideration for her performance in the 100-yard backstroke.

Both teams will battle it out against Northern Nevada’s toughest programs when they compete for the 3A state championship at the Carson Aquatic Center on Saturday.

Boulder City High School’s softball season was cut short Friday by the hands of rival Moapa Valley, which defeated the Lady Eagles 5-4 in the 3A Southern Region losers bracket final.

Eventually becoming regional champions after defeating Pahrump Valley twice, the Pirates scored a pair of runs in the top of the sixth with runners on the corners when junior Kessa Evans launched a hit into the gap in right-center field to clear the bases.

Boulder City had a chance to retaliate in the bottom of the seventh with the bases loaded, but wasn’t able to capitalize.

“You have to give them all the credit,” junior Bailey Bennett-Jordan said. “To rally in the sixth and then stop us in the seventh, they deserve this victory. They played us better than any team this season. I was proud to walk across the field and shake all of their hands. The better team won.”

Charged with the loss despite another solid day on the mound, Bennett-Jordan threw seven innings, allowing five runs on 10 hits with seven strikeouts. At the plate, she went 2-for-2 on the day.

“There’s no shame in losing to a team who went on to become the regional champion,” Bennett-Jordan said. “We played them tough, but it wasn’t enough. It’s time to get back to work and let this eat at us for a year. We’ll come back hungrier next season.”

Sophomore Ryann Reese and junior Micayla Gegen each went 2-for-3 against the Trojans.

Juniors Jerra Hinson (1-for-4) and Lily Osman (2-for-3) each had a run batted in for the Lady Eagles on Friday against the Pirates. Freshman Ellie Ramsey had an RBI as well after batting 1-for-2.

The 3A state championship meet will see a handful of Lady Eagles competing this weekend after Boulder City High School’s girls track program finished third at the Southern Regional meet.

Finishing behind Cheyenne (124) and Virgin Valley (113.5) with an overall team score of 107, the Lady Eagles qualified eight competitors for the state championship in 10 events.

“I am very proud of how our girls stepped up and competed,” head coach Sara Fisher said. “Last year, we only had two girls compete in one event each. This year, we’ll be well represented in 10 different events by eight girls. I couldn’t be happier.”

Seniors Jordyn Trobinai and Kenadee Bailey were the all-around stars for the Lady Eagles qualifying for state in three events each.

Placing first in the triple jump with a personal best leap of 34-2, Trobinai also finished second in the high jump with a leap of 4-6 and in the 400-meter dash with a time of 1:02.49. Trobinai will also compete at state in the 4×400 relay with senior Sara Stepherson, junior Taylor Tenney and sophomore Hannah Miller.

The seniors weren’t the only competitors to earn personal bests, with Tenney generating a first-place finish in the long jump with a leap of 15-4. She will also compete in the triple jump after finishing fifth with a leap of 32-2.

“I debated whether or not to put Taylor in the 100-meter dash because she was our fastest girl,” Fisher said. “After seeing her long jump last week however I knew she had what it took to rank better than what she’s been placed. She won the event with an amazing jump.”

For the boys track program, senior Tyler Campbell and junior Zach Trone will each compete in three events at state after leading the Eagles to a sixth-place team finish at regionals.

Falling just an inch short of setting the school triple jump record, Trone set a personal best in the event with a third-place leap of 45-4.25, while finishing fourth in the long jump with a leap of 20-4. Competing as a sprinter as well, Trone finished fourth in the 100-meter dash with a time of 11.75 seconds.

The 3A state meet will be held Friday and Saturday at Foothill High School.