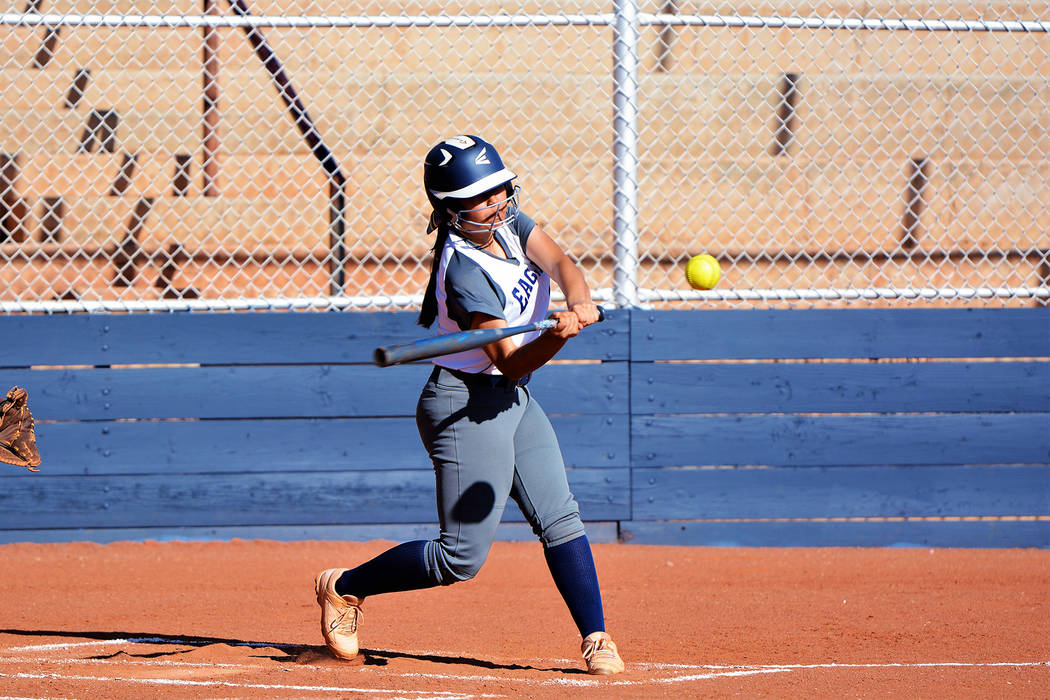 Having a rough time with their 4A opponent, the boys fell 191-91, but picked up two individual events from senior A.J. Pouch.

One of the best swimmers in the state regardless of classification, A.J. Pouch placed first in the 100-yard breaststroke and 200-yard freestyle.

Dominating the Miners 10-4 after a slow start, the Lady Eagles rebounded from a league-opening 7-6 loss to Chaparral on Friday, March 29, helping dig themselves out of a potential hole.

“At the beginning we started out rough but we got ourselves back up by being loud and cheering,” senior Ryann Reese said. “It was a very important victory due to the loss at Chaparral. We needed this for our confidence in league play.”

Trailing 2-1 heading into the bottom of the third inning, the Lady Eagles’ bats came alive, rattling off consecutive innings of two, four and three runs before quieting down in the sixth inning.

Reese finished 4 for 5 at the plate with an run batted in; sophomores Rose Mackey (1 for 2) and Rachel Krumm (0 for 1) each drove in a pair of runs.

Freshman Lily Hood batted 3 for 4 at the plate and senior Marleena Mills batted 2 for 4 with an RBI.

“Again, today we started flat once more,” head coach Angelica Moorhead said. “We cannot afford to play like that. It’s frustrating, especially when you know how good this team can be. They need to find their desire and play the game from start to finish. Today’s win is hopefully the start for a successful rest of our league play and going into regionals and the state tournament.”

On the mound, freshman Alyssa Bryant picked up the win, throwing four innings where she struck out six batters.

The Lady Eagles dug themselves into a 4-1 deficit heading into the top of the fifth inning against the Cowboys before coming alive in the last half of the game.

Doing her part at the plate, sophomore Brooke Baker batted 2 for 3 with a home run and two RBIs, while Mackey batted 1 for 3 with two RBIs.

A case of would of, could of, should of to start league play, Moorhead is hopeful the loss will inspire the team to play at maximum effort moving forward.

“Hopefully it is a wake-up call,” Moorhead said. “We came out flat, quiet and then decided in the sixth and seventh innings to play. The fight was there, it was just to late.”

Finishing with a team score of 322, the Eagles defeated Virgin Valley (392) and Somerset Academy Sky Pointe (411).

Sophomore Blake Schaper led the way, finishing first with a score of 74 on the par 72 course.

Sophomore Kyle Carducci finished fifth with a score of 90.

Heading into the back half of league play, the Eagles host a week day event on April 11.

Finishing with a team score of 43, the Lady Eagles were outshined by rival Moapa Valley (104). Del Sol (33) closed out the three team event.

Hosting their second weekday event of the season today, Boulder City will compete against Chaparral, Pahrump Valley and Lake Mead Christian. They’ll travel to Valley on Wednesday to run against the Vikings and Democracy Prep.