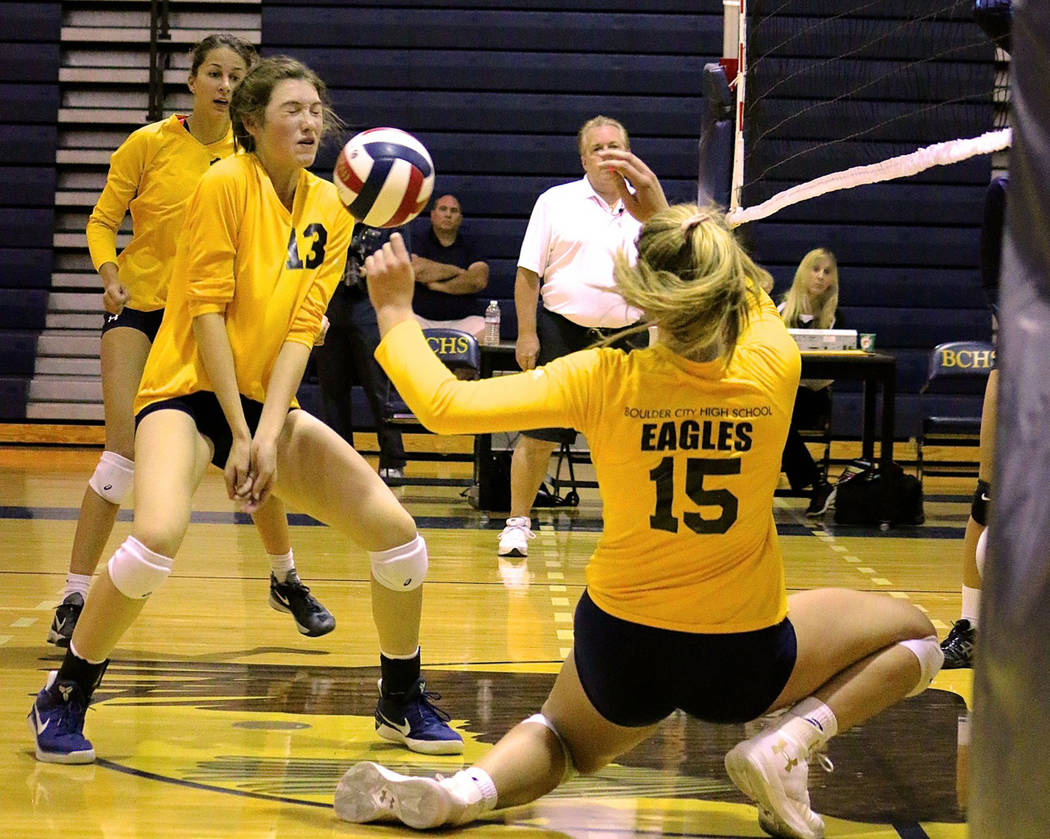 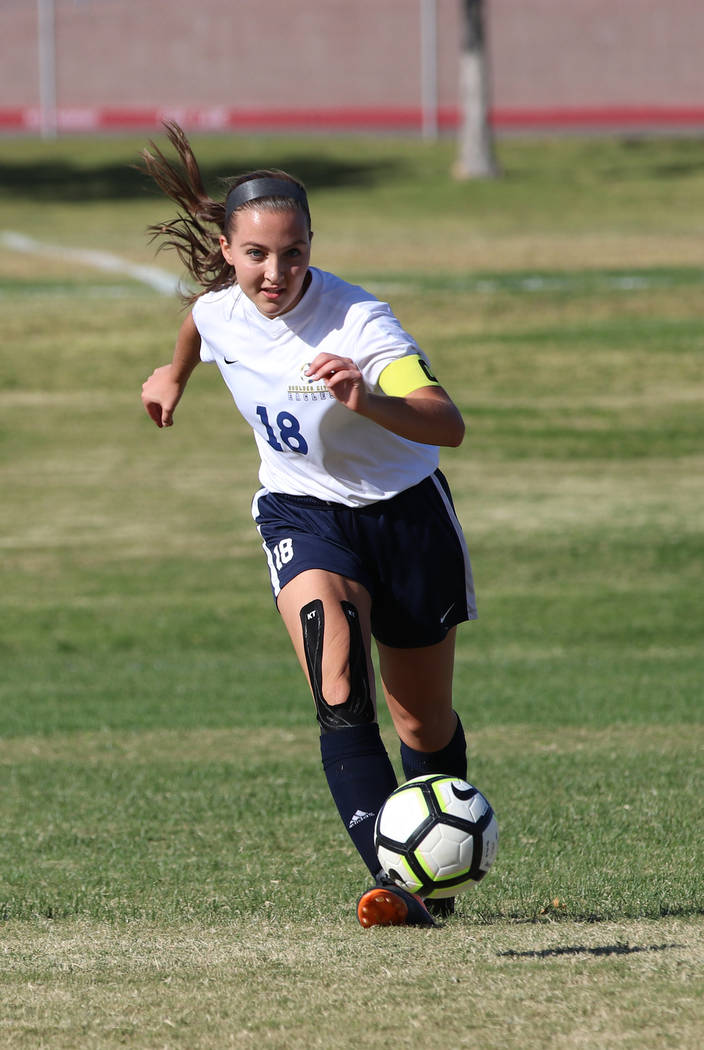 Tristin Phelps/Boulder City Review Boulder City High School senior Sydney Manns puts up a fight against the Virgin Valley Bulldogs on Oct. 12 as she races to take control over the ball.​ The Lady Eagles lost 4-0.

Cruising to a 25-8, 25-17, 25-16 victory, the Lady Eagles (21-14) behind the duo of senior Maggie Roe and freshman Kamry Bailey displayed one of their better performances this season, using an all-around attack to fuel the victory.

Roe led the way with 10 kills and 10 assists, her fourth game of the season recording a double-double, while generating nine serving aces. Recording 10 kills as well, Bailey tallied nine digs defensively along with five serving aces.

Also sweeping their regular season two-game series against rival Virgin Valley 3-0 on Tuesday for the first time since 2014, the Lady Eagles should be riding momentum heading into tonight’s home game against Southeast Career Technical Academy, before they prepare for Monday’s road contest with top-seeded Moapa Valley.

The Lady Eagles, which clinched no worse than the second seed in the 3A Sunrise standings, heading into the postseason will end the regular season Wednesday against Del Sol.

A rough week of play leaves Boulder City High School girls soccer on the outside looking in for a postseason berth, following losses to Virgin Valley and Southeast Career Technical Academy.

Falling 4-0 to the rival Bulldogs on Oct. 12, the Lady Eagles (4-7-1) provided a better defensive effort against Southeast Career Technical Academy despite losing 2-1.

Tied 1-1 with the Roadrunners heading into the second half, senior Jaydin Darling scored an unassisted goal midway through the first half with a left-corner strike.

Unable to hold the tie, Roadrunners forward Adrianna Carrillo broke the game open midway through the second half to propel Southeast Career Technical Academy to the league victory.

Looking to end the season on a high note after losing four of their last five games, the Lady Eagles will travel to Del Sol on Tuesday, followed by senior night on Oct. 26 at home against Chaparral.

Scoring all three of the Eagles’ (5-7-1) goals against the Bulldogs on the road, Balmer created space in the second half with a pair of goals, assisted by seniors Alex Krausman and Robbie Leavitt.

Krausman scored the Eagles’ lone goal in the second half.

Winning two of their last three games, the Eagles look to close out season on a high note with an upcoming three-game slate. Traveling to Chaparral today, Boulder City will end the season with a pair of home games against Pahrump Valley on Saturday and Del Sol on Tuesday.

Friday and Saturday, Oct. 20 and 21, B and junior varsity classic at Green Valley and Foothill, TBA