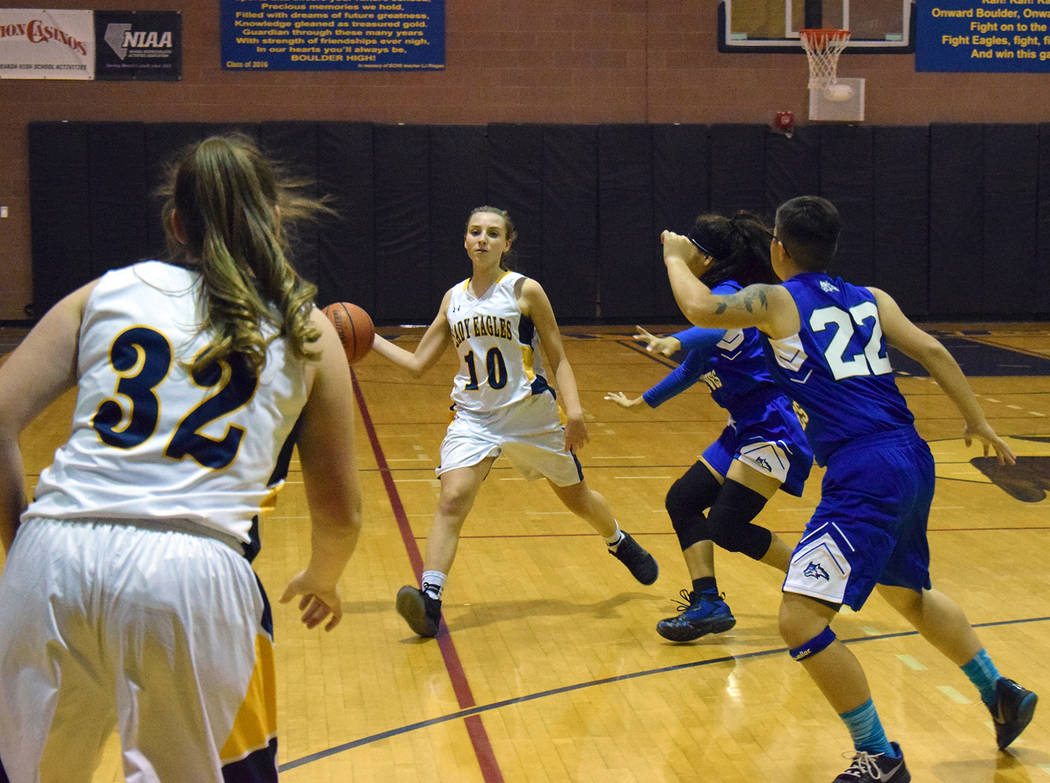 Robert Vendettoli/Boulder City Review Madison Manns, a sophomore at Boulder City High School, works her way through a pack of Lady Wolves from Basic High School during the Lady Eagles' 47-27 loss Tuesday. Manns was the team's top scorer with 9 points.

Emerging as one of the top underclassman guards, Boulder City High School sophomore Madison Manns was named to the 3A All-State girls basketball team.

“It was exciting to receive this nomination and represent our girls basketball team,” Manns said. “We had a good season and I enjoyed playing with good teammates and players. Our coaches cared and had us ready to win games. We are looking forward to next season and winning more games.”

Helping guide the Lady Eagles to a 9-3 record in 3A Sunrise League play, Manns contributed as one of two primary ball handlers for the program in their resurgent season.

Averaging 8.3 points per game during league play, Manns scored a season-high 16 points against Chaparral on Dec. 6.

Showing much improvement from her freshman season, Manns was also named to the 3A All-Southern Region and 3A All-Sunrise League first teams.

Racing past the Wolves as well, the Lady Eagles came away with a 189-101 victory, winning all eight individual events.

Continuing to test their skills against 4A competition, Boulder City will face Rancho on Saturday, April 28, at the Henderson Multigenerational Pool.

Finishing with an overall team score of 348, the Eagles defeated rivals Virgin Valley (389) and Chaparral (432), claiming four of the top five placings.

Continuing to make strides toward the back end of the season, sophomore reserve Landon Key shot a 96, putting him in eighth place.

The Eagles will look for a clean sweep in league play traveling to Painted Desert today, April 26, for their last regular season match.

Finishing second behind 2A Tonopah (128), the Lady Eagles finished with an overall score of 96 points, just edging out third-place finisher Desert Pines (95).

“The boys are playing hard,” head coach Rachelle Huxford said. “As a whole, everyone was on fire against Canyon Springs. It was a good win. I am proud that our tough match schedule hasn’t discouraged them.”

Jorgensen led the way with 17 kills, while Bailey supplied eight. Sophomore Boen Huxford set the duo up with 13 assists.

The Eagles will play this weekend in Redondo Beach, California, before hosting 3A Chaparral on Tuesday, May 1.